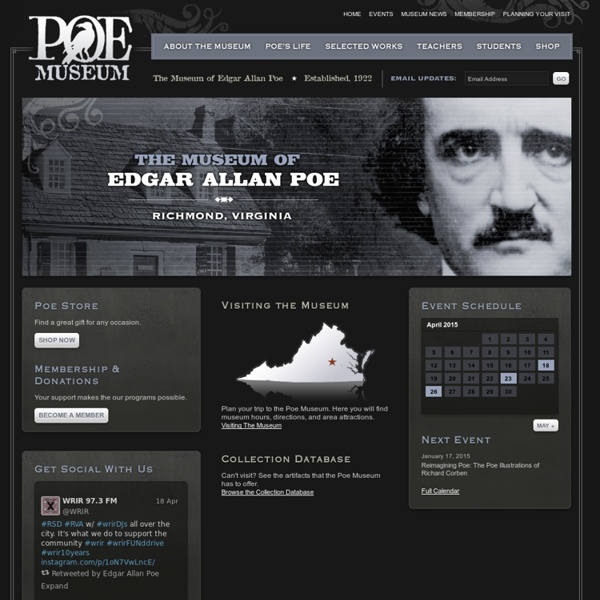 24 Best Poems to Teach in Middle and High School It can be hard to know which poems will spur your middle and high schoolers into deep, meaningful discussion and which will leave them, ahem, yawning. So we asked experienced teachers to share their favorites—the punch-in-the-gut poems that always get a reaction, even from teens. Here's what they had to say. Edgar Allan Poe Edgar Allan Poe (1809-1849), American poet, critic, short story writer, and author of such macabre works as “The Fall of the House of Usher” (1840); I looked upon the scene before me - upon the mere house, and the simple landscape features of the domain - upon the bleak walls - upon the vacant eye-like windows - upon a few rank sedges - and upon a few white trunks of decayed trees - with an utter depression of soul which I can compare to no earthly sensation more properly than to the after-dream of the reveller upon opium - the bitter lapse into everyday life - the hideous dropping off of the veil. There was an iciness, a sinking, a sickening of the heart - an unredeemed dreariness of thought which no goading of the imagination could torture into aught of the sublime. What was it - I paused to think - what was it that so unnerved me in the contemplation of the House of Usher? Young Edgar traveled with the Allans to England in 1815 and attended school in Chelsea.

Kodu and the Circuit of Reflective Action Reflections on a quick lesson using Kodu – a piece of game creating software. Kodu is a free piece of software for PC (and Xbox – it is created by Microsoft) that enables children to create their own 3D, virtual-world games. Like Scratch, it allows children to experience a relatively basic approximation of ‘coding’. Be Glad Your Nose is on Your Face On September 8, 1940, Jack Prelutsky was born in Brooklyn, and attended Hunter College in New York City. Although he claims to have hated poetry through most of his childhood, he rediscovered poetry later in life, and has devoted many years since to writing fresh, humorous poetry aimed specifically at kids. “I realized poetry was a means of communication, that it could be as exciting or as boring as that person or that experience.” In 2006, Prelutsky was named the first Children’s Poet Laureate by the Poetry Foundation.

Trees for Life - Mythology and Folklore of the Raven A distinct black shape, tumbling in the updrafts of a mountain crag - a raven at play. The 'gronking' call of a raven is one of the most evocative sounds of Britain's uplands. The raven is probably the world's most intelligent and playful bird. In the world of myth, it is a bird of paradox, and something of a dark clown. Its association with playful intelligence is perhaps exceeded by its image as a bird of death. Its harsh call, and its presence in remote wild places and at scenes of death, has earned it a reputation as a bird of ill-omen.

Games based learning - Resources Last Updated:8 November, 2012Section:Resources Classroom games Welcome to the Games-based learning collection of resources. Here you will find a range of ready to use resources, adaptable resources and lesson plans/suggestions for playful approaches to learning across the curriculum, as well as for encouraging learners to become creators of their own games. Why not contribute your own ideas? In the news - Gove’s computer science revolution The art of the metaphor - Jane Hirshfield To explore metaphors more fully on your own, there are three directions you can go. The first is simply to start noticing whenever you meet one. Jane Hirshfield slipped metaphors into many of the things she said in this lesson. You might listen to it again and make a list of some of the metaphors she used along the way, without pointing out that they were metaphors.

The Raven in popular culture Edgar Allan Poe's poem "The Raven" has been frequently referenced and parodied in contemporary culture. Immediately popular after the poem's publication in 1845, it quickly became a cultural phenomenon. Some consider it the best poem ever written.[1] As such, modern references to the poem continue to appear in popular culture. Print[edit] Writer James Russell Lowell, a contemporary of Poe's, references "The Raven" and its author in his poem, A Fable for Critics: "Here comes Poe with his Raven, like Barnaby Rudge, / Three fifths of him genius, two fifths sheer fudge." This mention alludes to the belief that Barnaby Rudge: A Tale of the Riots of 'Eighty inspired Poe to write "The Raven".[2]In Edmund Clerihew Bentley's Trent's Own Case (1913), Trent, standing at an open French door and reciting the fifth stanza to himself, receives an unexpected reply:

Coursera UPDATE: we're doing a live, updated MOOC of this course at stanford-online July-2014 (not this Coursera version). See here: CS101 teaches the essential ideas of Computer Science for a zero-prior-experience audience. Computers can appear very complicated, but in reality, computers work within just a few, simple patterns. Cultural depictions of ravens There are many references to ravens in legends and literature. Most of these refer to the widespread common raven. Because of its black plumage, croaking call, and diet of carrion, the raven has long been considered a bird of ill omen and of interest to creators of myths and legends.

A Plethora of habitat websites and activities Featured Post What it is: Kerpoof is one of my favorite creation tools for elementary students, it allows them to draw, create pictures, cards, books, and even movies. My original post about Kerpoof can be found here. Archive of Recorded Poetry and Literature Listen to audio-recorded readings of former Consultants in Poetry Elizabeth Bishop, Gwendolyn Brooks and Robert Frost; Nobel Laureates Mario Vargas Llosa and Czeslaw Milosz, and renowned writers such as Ray Bradbury, Margaret Atwood, and Kurt Vonnegut read from their work at the Library of Congress. The Archive of Recorded Poetry and Literature at the Library of Congress dates back to 1943, when Allen Tate was Consultant in Poetry. It contains nearly two thousand recordings—of poets and prose writers participating in literary events at the Library’s Capitol Hill campus as well as sessions at the Library’s Recording Laboratory. Most of these recordings are captured on magnetic tape reels, and only accessible at the Library itself.

Raven (disambiguation) Raven is the common name given to several larger-bodied members of the genus Corvus. Raven may also refer to: Association of Old Crows, from use of the code name "Raven" in electronic warfareEF-111A Raven, an electronic warfare aircraftHiller OH-23 Raven, a three-place, light observation helicopter used by the U.S.