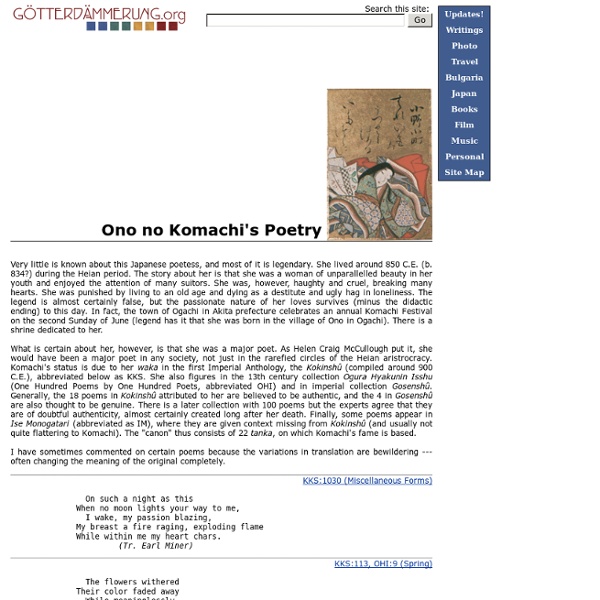 Very little is known about this Japanese poetess, and most of it is legendary. She lived around 850 C.E. (b. 834?) during the Heian period. The story about her is that she was a woman of unparallelled beauty in her youth and enjoyed the attention of many suitors. She was, however, haughty and cruel, breaking many hearts. What is certain about her, however, is that she was a major poet. I have sometimes commented on certain poems because the variations in translation are bewildering --- often changing the meaning of the original completely. KKS:1030 (Miscellaneous Forms) On such a night as this When no moon lights your way to me, I wake, my passion blazing, My breast a fire raging, exploding flame While within me my heart chars. KKS:113, OHI:9 (Spring) The flowers withered Their color faded away While meaninglessly I spent my days in the world And the long rains were falling. KKS:797 (Love) A thing which fades With no outward sign Is the flower Of the heart of man In this world! Related:  Books and poetry

Write & Get Paid Get Paid $100 Do you want to earn money online? Listverse was built on the efforts of readers just like you. Readers who didn’t have any experience as writers but decided to put a list together and send it in. So here is the deal: We will pay you $100 for your efforts. You don’t need to be an expert—you just need to have English equal to that of a native speaker, a sense of humor, and a love for things unusual or interesting. It works like this: You write your list (10 items per list minimum), you send it in, we reply and say “Great—we’ll publish it” and send you $100 by PayPal (don’t have an account? Either way you win—your list will be read by us and reviewed, and if it’s amazing it will appear on the front page of Listverse to be read by millions of people a month! We can not accept lists from writers who do not have a PayPal account; this is non-negotiable. The Rules The rules are really pretty simple. Pictures and Video Please note that we publish original articles. Ready to start?

COMPLETE COLLECTION OF POEMS BY RUDYARD KIPLING Kipling gained renown throughout the world as a poet and storyteller. He was also known as a leading supporter of the British Empire. As apparent from his stories and poems, Kipling interested himself in the romance and adventure which he found in Great Britain's colonial expansion. Kipling was born on Dec.30, 1865, in Bombay, where his father directed an art school. In 1889, Kipling return to England. Kipling composed many of his poems while living for several years in the United States in the mid-1890s. In 1896, Kipling returned to England from the United States. In 1900, Kipling went to South Africa to report the Boer War for an English newspaper. Before World War I, Kipling became active in politics. he widely lectured and wrote for the British cause both before and during the war.

You Know You Want Sexy Abs! | healthkicker The next month or two of work on Xanga 2.0 is going to be busy, so I wanted to share with everyone a roadmap of how we’re thinking about things! We’re dividing the work on this project into four basic phases. Phase 1. As described here, we’ve imported over every account that we have on Xanga over to the new system so that anyone who could sign into Xanga can still sign into Xanga 2.0. Finally and most important of all, we’ve imported over 2 million blogs from the old system. * We’ve archived the blogs of the hundreds of thousands of blogs where the user has logged in in the past 5 years and has at least two subscribers. * We did an additional set of archives for 200k users who had logged in the past year and had at least 10 blogs. * We’ve also archived the blogs of every single user that’s ever been premium at any point in the past… And of course, a lot of you guys archived your own blogs using the old Xanga archive generator. Phase 2. Phase 3. Phase 4.

The Adroit Journal Submission Manager - Poetry (HIGH SCHOOL AND COLLEGE) What is it? As a way of maintaining and extending our deep-rooted commitment to emerging writers, The Adroit Journal’s Summer Mentorship Program aims to pair experienced Adroit editors and staff with high school students (as of the 2013-2014 academic year) interested in learning more about the creative writing processes of drafting, redrafting and editing. The program is free to all, and will cater to the literary genres of poetry and prose (short story, creative nonfiction, etc.). The aim of the mentorship program is not formalized instruction, but rather an individualized, flexible, and often informal correspondence. Applicants should possess firm work ethic and some familiarity with the writing and workshop process, and should be comfortable with receiving (and, to some extent, giving) commentary and critique. Please note that this opportunity will not offer academic credit (this is a friendship, not a class!) How do I apply? The Selection Process

Girls vs Boys Posted on February 6, 2012 in Humor If you’re new here, you may want to subscribe to our RSS feed or follow us on Facebook or Twitter . Thanks for visiting! Rate this Post (7 votes, average: 4.71 out of 5) Loading ... So... Check this out on our Partner Network Reading Poems Backward It probably happens now and then, though perhaps you don’t give it much thought. You read a poem backward. You pick up a poetry anthology, or you come upon a poem in a magazine, and your eye chances to fall upon its last lines. You read those. Then you read the poem. You read the poem, that is, knowing exactly where it’s headed. Reading a poem backward is a distinctive experience, during which you’re typically asking not Where is this going? Say you read Keats’s sonnet “When I have fears that I may cease to be” backward. Then on the shore Of the wide world I stand alone, and think Till love and fame to nothingness do sink. You then proceed to the start, aware that the poem is going to entail a throwing off of earthly cares and concerns. The other day, I took down from a friend’s bookshelf Conrad Aiken’s anthology “Modern American Poets” (1927). I fell upon its amenable concluding couplet: “Ah, yes; ah, yes; ah, yes, indeed, / Verily yes, ah yes, indeed!”

Hand drawings, made using a pencil 50 Amazing and Essential Novels to Enrich Your Library Post written by Leo Babauta. I recently ran into a couple of reading lists (I’ll share them at the end) and realized that I LOVE reading book recommendations. I can’t get enough of them. So I decided to compile my own (somewhat eclectic) list of novels I think are amazing and essential to every library. I hope you enjoy it. I should make some notes before diving in. Another note: there are actually many more books listed here than 50 — a number of those listed are actually series of books, in a couple cases series that include 20 or more books. There are classics here, but there are cheap thrillers and popular fiction and even a few “kids” books. If you could fill your library with only 50 books, you could do much worse than choose these 50. Not in any order but just in the order they came to me: King Lear, by Shakespeare. Some other lists of books I’ve enjoyed recently:

Poet Seers 10 beautiful sacred spots Mount Parnassus (Photo: age fotostock / SuperStock) When we modern folks visit a beautiful natural site, the experience may evoke a sense of peace, a feeling of awe, or just the need to snap a million photos. If you'd like to see your images on Yahoo! Travel, join now and submit your own! For our ancient forebears, though, these places were so much more. From the mythological homes of powerhouse gods like Zeus and Shiva to the serene spot where the mortal Buddha achieved enlightenment, these are the places of legends. Mount Parnassus, Greece Towering above Delphi in central Greece, this limestone mountain looms large in Greek mythology. The three Corycian Nymphs, each of whom was romanced by a major god, were born of springs located on Parnassus, and the mountain was also the setting for many minor myths. See more photos of the places. Mahabodhi Tree (Photo: Photononstop / SuperStock) Mahabodhi Tree, Bodh Gaya, India Mount Sinai (Photo: Paul Prescott / Dreamstime.com) Mount Sinai, Egypt