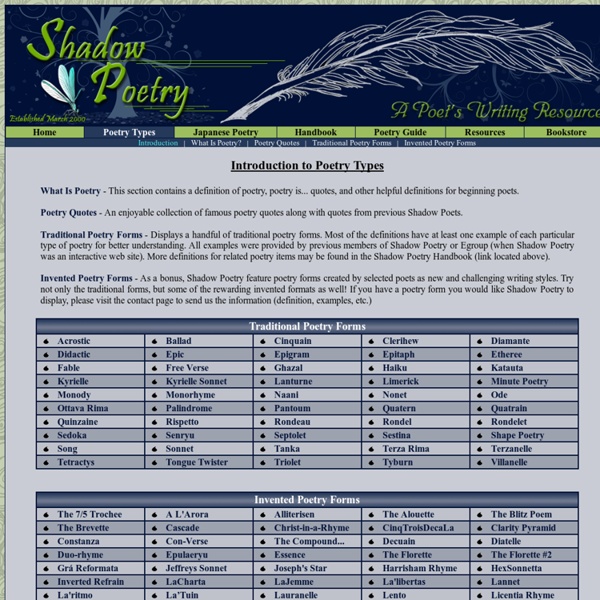 What Is Poetry - This section contains a definition of poetry, poetry is... quotes, and other helpful definitions for beginning poets. Poetry Quotes - An enjoyable collection of famous poetry quotes along with quotes from previous Shadow Poets. Traditional Poetry Forms - Displays a handful of traditional poetry forms. Most of the definitions have at least one example of each particular type of poetry for better understanding. Invented Poetry Forms - As a bonus, Shadow Poetry feature poetry forms created by selected poets as new and challenging writing styles. Related:  Poetry

10 poems to read on National Poetry Day In honor of National Poetry Day, TED-Ed asked writing teachers at the San Francisco Writers Grotto to recommend their favorite poems worth sharing. Below, a short poetry reading list for TED-Ed learners of all ages. Constance Hale, author of Sin and Syntax: How to Craft Wickedly Effective Prose, recommends: “Design” by Robert Frost For younger readers, I would go with some of the easier Robert Frost poems, which would set the stage for the more complex ones. Caroline Paul, author of Lost Cat: A True Story of Love, Desperation, and GPS Technology, recommends: Billy Collins, in general Poetry is about concision, beauty — and the sudden swerve that tweaks the reality we thought we knew. “Percy and Books” by Mary Oliver I love the way Mary Oliver pokes fun at herself, realizing that poetry is paltry next to a day romping about in nature. Ethan Watters, author of Crazy Like Us: The Globalization of the American Psyche, recommends: Grace Rubenstein, multimedia editor of TED Books, recommends:

Baby Boy Names A to Z Listing What you decide to name your newborn boy is one of the most important decisions you will make for him. Names can mean anything from honoring family, to specific traits in the meaning that you'd like to associate with your little boy. You may just be looking for a name that sounds good and is easy to pronounce. Whatever your needs when looking for a name, we've put together lists of unique and popular baby boy names to make choosing easier for you. We also have baby girl names lists for your new bundle of sugar and spice and everything nice. A to Z Listing Click on the links below to browse through alphabetized lists of names for your baby boy and lists divided by year, personality and more!

Haiku Society of America Sometimes -- Sheenagh Pugh Sometimes Sometimes things don't go, after all, from bad to worse. Some years, muscadel faces down frost; green thrives; the crops don't fail, sometimes a man aims high, and all goes well. A people sometimes step back from war; elect an honest man; decide they care enough, that they can't leave some stranger poor. Some men become what they were born for. Sometimes our best efforts do not go amiss; sometimes we do as we meant to. ~ Sheenagh Pugh ~ (In Good Poems , ed. by Garrison Keillor, contributed by Holly Thomas) (left button to play, right button to save)

Poems by poetic form Skip to mainSkip to navigation Abcedarian The abecedarian is a poetic form from pre-Biblical times. Acrostic An acrostic is a poem or song or any piece of writing in which (usually) the first letter of each line (or sentence, or paragraph) spells out a word or a message. Alexandrine The alexandrine is a line of six iambic feet; one foot longer than the iambic pentameter. Alliteration Alliteration refers to the use of similar sounds to begin a sequence of words, e.g. spick and span, kith and kin, jump for joy. Assonance Assonance is the repetition of similar vowel sounds in neighbouring words, to create the effect of rhyme within phrases or lines of verse. Ballad Ballads are narrative folk-songs or folk poems made up of simple four-line stanzas, usually rhyming abcb. Blank Verse Blank verse is a type of verse with a regular metre (usually iambic pentameter) but no rhyme, hence ‘blank’. Bush ballads Caesura Elegy Epic Free verse Haibun Haiku Iambic foot Ode Onomatopoeia Parody Prose-poem Rhyming Satire Sonnet

William Blake Selected Poems of William Blake Further Collections of Poetry by Blake Biography of William Blake William Blake was a poet, painter, visionary mystic, and engraver. During his life the prophetic message of his writings were understood by few and misunderstood by many. However Blake is now widely admired for his soulful originality and lofty imagination. “To see a world in a grain of sand And heaven in a wild flower Hold infinity in the palm of your hand And eternity in an hour.” From ” Auguries of innocence “ William Blake was born in London, where he spent most of his life. His early poems Blake wrote at the age of 12. In 1790 Blake engraved THE MARRIAGE OF HEAVEN AND HELL, a book of paradoxical aphorisms and his principal prose work. The Blakes moved south of the Thames to Lambeth in 1790. “Bring me my Bow of burning gold: Bring me my Arrows of desire: Bring me my Spear: O clouds unfold! (from ‘Jerusalem’ in Milton, 1804-1808) Blake Links

of Halloween - Halloween Halloween is a holiday celebrated each year on October 31, and Halloween 2021 will occur on Sunday, October 31. The tradition originated with the ancient Celtic festival of Samhain, when people would light bonfires and wear costumes to ward off ghosts. In the eighth century, Pope Gregory III designated November 1 as a time to honor all saints. Soon, All Saints Day incorporated some of the traditions of Samhain. The evening before was known as All Hallows Eve, and later Halloween. READ MORE: Halloween Through the Centuries: A Timeline Ancient Origins of Halloween Halloween’s origins date back to the ancient Celtic festival of Samhain (pronounced sow-in). This day marked the end of summer and the harvest and the beginning of the dark, cold winter, a time of year that was often associated with human death. To commemorate the event, Druids built huge sacred bonfires, where the people gathered to burn crops and animals as sacrifices to the Celtic deities. All Saints' Day Halloween Parties

Cure writer's block with writing prompts - writing tips character name generator Jack Kerouac's Essentials of Spontaneous Prose If possible write "without consciousness" in semi-trance (as Yeats' later "trance writing") allowing subconscious to admit in own uninhibited interesting necessary and so "modern" language... 66 Writing Experiments 5. William S. The cutup is a mechanical method of juxtaposition in which Burroughs literally cuts up passages of prose by himself and other writers and then pastes them back together at random... poetryreincarnations Heres a virtual movie of the great poet ,artist and mystic William Blake reading his wonderful profound almost pre-Dickensian poem "London" London is a poem by William Blake, published in Songs of Experience in 1794. It is one of the few poems in Songs of Experience which does not have a corresponding poem in Songs of Innocence. As with most of Blake's poetry, there are several critical interpretations of London. Kind Regards Jim Clark All rights are reserved on this video recording copyright Jim Clark 2010 London........ I wander through each chartered street, Near where the chartered Thames does flow, And mark in every face I meet, Marks of weakness, marks of woe.

Limerick Rules Otherwise known as poetry for the common man, limericks, named after the Irish town of the same name, were first published in 1820 in The History of Sixteen Wonderful Old Women Exhibiting their Principle Eccentricities and Amusements. by James Harris. They were popularised by Edward Lear (1812 - 1888) in his 1846 Book of Nonsense, a two-volume work featuring 73 illustrated limericks. Despite featuring examples of misogyny and racism, these books were intended for children, with mildly nonsensical verses such as these: There was an old man of Nepal From his horse had a terrible fall But, though split in two, By some very strong glue They mended that man of Nepal. There was an old man of the coast Who placidly sat on a post But when it was cold He relinquished his hold And called for some hot, buttered toast. Characteristic of Lear's limericks is the identical ending to the first and last lines (example 1) and the use of a place-name at the end of each. Limerick Structure

The Shearers' Cooks: How Dick and Cheryl Duggan keep a team of sheep shearers well fed Updated Five days a week for most of the year, sometimes toiling in primitive kitchens, often in remote districts of Australia's sheep belt, far from towns and supermarkets, Dick and Cheryl Duggan prepare up to 100 meals a day. The Duggans are shearers' cooks. Few jobs are as physically demanding as shearing sheep. "It astounds me still even sometimes because you get people that you just can't fill up," says Cheryl, who has seen a great deal in 46 years of catering for shearing teams. Husband Dick has spent 67 years in the shearing industry, starting as a shearer at just 14. "I told them I was 18 of course. He was a gun, who won 108 shearing championships, earning him the name "King". Currently the couple are in the Riverina region of southern New South Wales. Here at Pooginook Station, a famous Merino stud, there are eight shearers to feed and the same number of shed hands — the presser, woolclassers, roustabouts and a shearing contractor. What's on the menu? No signs of slowing down