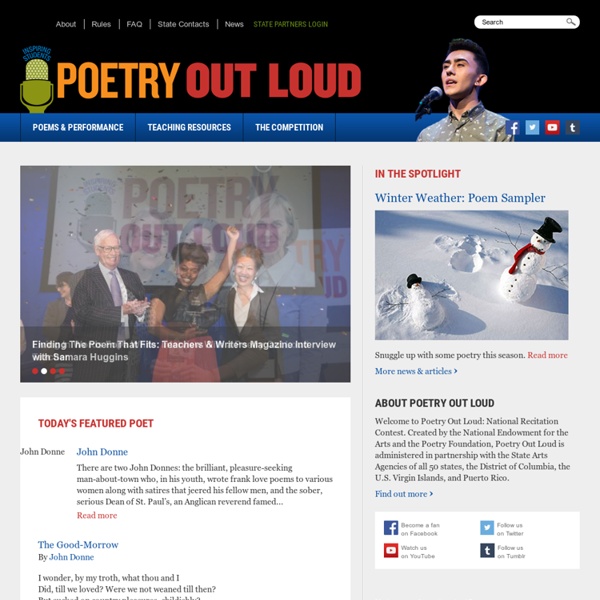 D. Nurkse D. Nurkse's parents escaped Nazi Europe during World War II—his Estonian father worked for the League of Nations in Vienna, his mother was an artist—and moved to New York. His family moved back to live in Europe for a number of years, returning First Nightby D.

PennSound PoemTalk 75: on Will Alexander's "Compound Hibernation" Posted 4/8/2014 Today saw the release of the landmark seventy-fifth episode in the PoemTalk Podcast series — an exploration of Will Alexander's poem, "Complete Hibernation," which was first published in Zen Monster before appearing in the 2011 collection, Compression & Purity. Poetry 180 - Home Page Welcome to Poetry 180. Poetry can and should be an important part of our daily lives. Poems can inspire and make us think about what it means to be a member of the human race. By just spending a few minutes reading a poem each day, new worlds can be revealed. Poetry 180 is designed to make it easy for students to hear or read a poem on each of the 180 days of the school year.

Poetry and Literature Poet Laureate Consultant in Poetry Tracy K. Smith was appointed by Librarian of Congress Carla Hayden to serve as the 22nd Poet Laureate on June 14, 2017. Smith is the author of three books of poetry, including Life on Mars (2011), winner of the 2012 Pulitzer Prize for Poetry. Smith took up her duties in September 2017, opening the Library’s annual literary season with a reading of her work in the Coolidge Auditorium. More About Tracy K. Teachers Archives Shelley Breivogel + Kimber Scarlett For our first Educator Spotlight of the year, we had the pleasure of chatting with two lovely ladies from Evansville, Indiana. Kimber Scarlett and Shelley Breivogel are second grade teachers at Scott Elementary School.

Lesson Plans : Poetry Out Loud Poetry Out Loud is not intended to replace classroom activities like creative writing. In fact, the two naturally complement each other. For that reason, we have created a number of optional writing activities and lesson plans for teachers. Glossary of Poetic Terms Where a poem makes reference to another poem or text. For example, the 14th line of The Prelude by William Wordsworth 'The earth was all before me' alludes to one of the final lines of Paradise Lost by John Milton 'The world was all before them'. Paradise Lost, in turn, alludes to the story of Adam and Eve in Genesis.

PennSound Filmed in an intimate domestic setting, traffic noises and birdsong drifting through open windows, Patton sits comfortably in a chair before the camera, reading from typescript pages, a pen poised in one hand. She performs in a fluid sprechtstimme, easing in and out of accents and personas, casually adding various musical accompaniments from time to time: she forces the knob on a toddler's toy music box, galloping through the lullabye at a hectic gait, then backs off, plinking it forward in little tonal constellations; she reaches down, offscreen, to plunk a guitar note or stroke the strings behind the nut, producing glassy little accents; her foot settles into a restless and insistent rhythm that resonates through the room. Papers flutter as pages turn, her hands trace and stretch notes through the air. She stares you down, then returns to the poem. Here's a fascinating recording from the late Ted Greenwald that we added to the site in January 2015.

POETRY PAIRINGS - The Learning Network Blog This week’s Poetry Pairing features “A Poem of Changgan” by Li Po and the Sunday Review article “Romance at Arm’s Length” by Daniel Jones. After reading the poem and the article, tell us what you think — or suggest other Times content that could be matched with the poem instead. Read more… Sara Krulwich/The New York TimesThis painting of two women preparing a Passover meal (seder) is called “The Washington Haggadah” and was painted in 1478. Related Article This week’s Poetry Pairing features “Paschal” by Robert Pinsky and the article “Put Yourself in the Story of Passover” by Edward Rothstein.