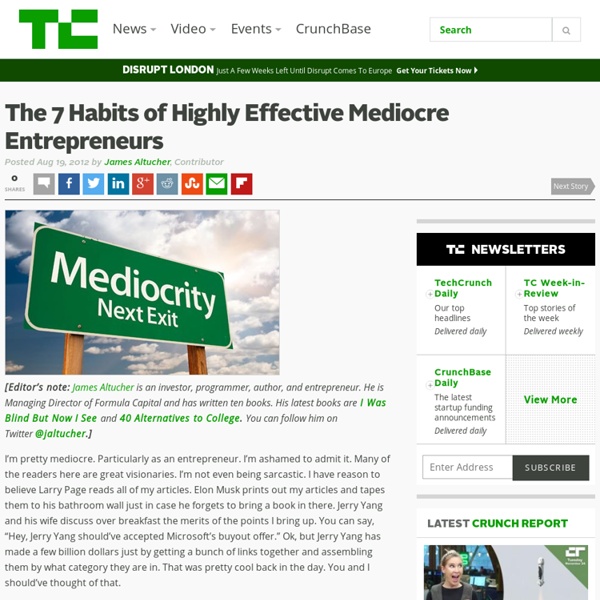 [Editor’s note: James Altucher is an investor, programmer, author, and entrepreneur. He is Managing Director of Formula Capital and has written ten books. His latest books are I Was Blind But Now I See and 40 Alternatives to College. You can follow him on Twitter @jaltucher.] I’m pretty mediocre. I’ve started a bunch of companies. That said, all entrepreneurs should be so lucky. If you want to get rich, sell your company, have time for your hobbies, raise a halfway decent family (with mediocre children, etc), and enjoy the sunset with your wife on occasion, here are some of my highly effective recommendations. - Procrastination – In between the time I wrote the last sentence and the time I wrote this one I played (and lost) a game of chess. Procrastination is your body telling you you need to back off a bit and think more about what you are doing. Try to figure out why you are procrastinating. Procrastination could also be a strong sign that you are a perfectionist. (has never failed)

How To Thrive In The Free-Product Economy Building technology has never been cheaper than it is today. Or faster. In the past twelve months, Ruby on Rails programmers built more than a million apps on top of Heroku, a platform that allows coders to save drastic amounts of development time. Historically, the majority of the cost of a typical app comes from maintenance, says Heroku COO Oren Teich; companies like his build layers of technology that deplete those setup and maintenance costs--not to mention experience required--to build software. "Innovation is increasing," Teich says. "This is a huge trend we're seeing day after day." Moore's Law says computer processing power gets steadily cheaper and faster to produce. If a product on the market can be monetized by any means other than directly selling it, a comparable version of that product will eventually be offered for free. It's Happened Throughout History Early newspapers cost money; we paid for the product. It Happens Because Of Networks It's Happening In Enterprise

All Revenue is Not Created Equal: The Keys to the 10X Revenue Club May 24, 2011: May 24, 2011: [Follow Me on Twitter] “ Don’t you know that you are a shooting star,And all the world will love you just as long,As long as you are.” – Paul Rodgers, Shooting Star With the IPO market now blown wide-open, and the media completely infatuated with frothy trades in the bubbly late stage private market, it is common to see articles that reference both “valuation” and “revenue” and suggest that there is a correlation between the two. What drives true equity value? Because of the difficulty of getting DCF right, investors commonly use a handful of other shortcuts to determine valuations. The following chart highlights 2012 forward price/revenue ratios for 122 global Internet stocks. Before we talk about why there is such disparity, it is important to highlight a few more points. What causes such a wide dispersion of price/revenue multiples? 1. If high price/revenue multiple companies have wide moats or strong barriers to entry, then the opposite is also true. 2.

North of Where We Are Today: Live Nation Labs in San Francisco - Live Nation Labs By Eric Garland [Update: Rexly duderino Joel Resnicow has written a better and more informative announcement. Please read his first.] Tonight I’m feeling reflective, on the eve of the announcement that we have acquired iPhone social music star Rexly and that the Rexly team will establish our new San Francisco presence, Live Nation Labs North, or LN² as it’s already known around here. I’m feeling reflective (in addition to yeehaw, hellyeah, and damnright) because Joel and Kyle have just entrusted to the Labs something handmade, something precious and rare. I did that myself just a few months ago. I’m also feeling reflective because with team Rexly we continue to recruit the people who inspire us. After we started the Labs, but before we’d told anybody what we were up to, Ethan and I started sneaking** up north to court Rexly. The Live Nation Labs sketch looked a lot like Rexly’s sketch. I believe: A team of true believers will beat non-believers almost every time. **Well, I was sneaking.

Startup is the New Hipster. I went to a conference in June, actually, correction, I spoke at a conference in June (baller!), and watched a presentation given in prezi. It was awesome. "Prezi is awesome," I told my startup friend two weeks later. Startup is the new hipster. Home Base Computer Phone Constantly Posting to Instrument of Choice Accessories Idea Storage Reading About Obsessively Checking Blogs About Shirt Additional Layer Pants Glasses Shoes Bag Facial Hair The Letter Y Mode of Transportation Accommodations Affection Expression Housing Pomodoro Morning Beverage Evening Beverage Breakfast Lunch Dinner Goal re: the Industry? "Do Great Things" Pick-Up Line **** All stereotypes in this publication are entirely stereotypical and any resemblance to real persons, living or dead, is purely coincidental. You can comment here on how inaccurate this list is because you run a startup but own a Droid and live in Chicago.

leanstartup: #leanstartup requires opinions... Why I Never Started My Own Company My Dad started his own company. He is a first generation American, PhD in engineering and invented the first fully automated fortune cookie machine. He is an inventor. Other than watching sports (the apple doesn’t fall far from the tree), he enjoys nothing more than building stuff. That said, it was a gut-wrenching life. Practically speaking, he had a family to support and like many entrepreneurs, there were many weeks when he didn’t know if he could deliver products on time; pay suppliers on time; and most importantly, make payroll to people who relied on him. His darkest days were always worse than his happiest ones. You should only start a company if you’re prepared to feel like this more days than not. Kudos

How Airbnb Evolved To Focus On Social Rather Than Searches It’s good to be Joe Gebbia these days: A mere five years ago, his friend from RISD, Brian Chesky, arrived on his doorstep to rent a room in his loft. That same weekend, a flood of fellow designers were rushing to find hotels for an upcoming design conference. There weren’t any hotels left. Chesky didn’t have a job. From A Star To A Heart That effort began with a total site redesign just four months ago, centering around "Wish Lists," which are lists of lust-worthy properties that users create themselves. For a couple years, registered Airbnb users have been able to star the properties they browse, and save them to a list. Probing the reasons why a heart was so different from a star, they eventually landed on the concept of Wish Lists. Partly, this is a functional improvement: You can use these lists to plan trips collaboratively. The Coding Magic That Makes It Work This might seem like a minor detail, but as any good engineer will tell you, speed equals engagement.

Screw the Black Swans: Ichiro is our role model, not Barry Bonds. | Dave McClure There are probably better things for me to do today, however i feel compelled to respond to the Black Swan Farming post by Paul Graham, founding partner of Y Combinator. Maybe you can call this post “Grooming for Ugly Ducklings”. While i respect YC & PG immensely – note that 500 Startups has invested in over 40+ YC startups, and we have generously borrowed (COUGH) many excellent & original ideas that YC developed – at the same time, it’s useful to grok the similarities vs. differences between 500 & YC. Put bluntly: we are both ambitious and we both play baseball, but YC is quite clearly the Yankees, while 500 is more like the Oakland A’s. This may sound like 500 is aiming for the minor leagues rather than the majors, but on the contrary, it’s more a difference in philosophy and style. However, our role models are Ichiro, Steve Nash, Allen Iverson, & Michelle Kwan, rather than Barry Bonds, Joe Montana, Michael Jordan, or Serena Williams. YC and 500 also both focus on SCALE. Kudos

Black Swan Farming September 2012 I've done several types of work over the years but I don't know another as counterintuitive as startup investing. The two most important things to understand about startup investing, as a business, are (1) that effectively all the returns are concentrated in a few big winners, and (2) that the best ideas look initially like bad ideas. The first rule I knew intellectually, but didn't really grasp till it happened to us. In startups, the big winners are big to a degree that violates our expectations about variation. That yields all sorts of strange consequences. To succeed in a domain that violates your intuitions, you need to be able to turn them off the way a pilot does when flying through clouds. [2] You need to do what you know intellectually to be right, even though it feels wrong. It's a constant battle for us. The probability that a startup will make it big is not simply a constant fraction of the probability that they will succeed at all. Harder Harder Still Notes

Blake MastersSearch results for: cs183 Peter Thiel’s CS183: Startup - Class 18 Notes Essay Here is an essay version of my class notes. Errors and omissions are mine. Credit for good stuff is Peter’s. I. Founders are important. A. PayPal’s founding team was six people. The eccentricity didn’t stop there. Ken was somewhat more on the rational side of things. One could go on and on with this. B. Many traits are normally distributed throughout the population. Where do founders fall? But that radically understates things. Nurturing a Baby and a Start-Up Business Michael Falco for The New York Times Co-founder of the Knot, Carley Roney, with her sons, Cairo, 8, and Dublin, 4, at the Knot offices in downtown Manhattan. And yet a small group of women is proving that it’s possible to start a high-growth technology company and have children at the same time. They are dispelling the image of the tech entrepreneur as a single, usually male, wunderkind. And there’s Carley Roney, 43, co-founder of the XO Group, a publicly traded media company valued at $300 million. Divya Gugnani, meanwhile, is the founder and chief executive of Send the Trend, an e-commerce site for accessories and beauty items that was bought by QVC in February. The average age of a first-time founder of a company is 39 — meaning that start-up life for some entrepreneurs is less about video game marathons on Saturdays and more about balancing parental responsibilities. Ms. “All of the women I know who went to raise money did it when they didn’t have kids,” she says. Ms. Ms. Ms. Mr.

The 7 deadly sins of software development Companies today are often so focused on growth that they commit one (or several) software development sins. As a developer at RightScale, a SaaS cloud management solution, I have borne witness to, and at times even been guilty of, the following temptations. 1. Getting other people to lust after your products can be very profitable. 2. Every company and developer is aware of software bloat, but many don’t understand how bad it really is. 3. Arguably, we are in another valuation bubble right now, especially in the IPO market, and it’s easy to get greedy. 4. Sloth is apathy, not laziness. 5. Although many software engineers seem peaceful, underneath the surface often lurks a passive aggressive personality. 6. Envy can be very dangerous in software development. 7. On a small scale, excessive pride can lead to “just trust me” behavior that adds risk to the system. Magne Land is currently the scrum master and tech lead at RightScale, a provider of multi-cloud management.