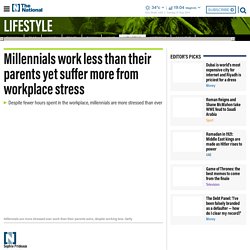 It refers to the notion that millennials – those born in the '80s and '90s – are overloading themselves to the point that they struggle with everyday tasks. But a new study has found that millennials are actually spending far less time in their places of work than the generations that came before them. Yet, despite these shorter hours and more freedoms in the workplace, millennials also feel like they are under much greater pressure. Millennials being squeezed out of middle class, says OECD.

Millennials in advanced economies around the world are being squeezed out of the ranks of the middle class, including in Britain, as pay growth stalls and house prices skyrocket, according to the OECD. 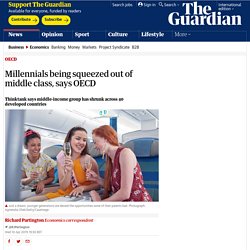 The Organisation for Economic Co-operation and Development (OECD) said that for every generation since the baby boom of the 1940s, across 40 major countries, the middle-income group had shrunk and its economic influence weakened. The Paris-based organisation, which represents 36 wealthy nations around the world, but also included South Africa, China, Russia and Brazil in its analysis, said there had also been a noticeable decline in the living standards of middle-income families over the past three decades. It said there were 15 countries where the middle class was now a smaller group than before the financial crisis; the group was defined as people whose earnings are between 75% and 200% of median national income. Millennials Are Screwed. Eight, 10 people in suits, a circle of folding chairs, a chirpy HR rep with a clipboard. 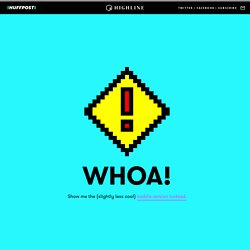 Each applicant telling her, one by one, in front of all the others, why he’s the right candidate for this $11-an-hour job as a bank teller. It was 2010, and Scott had just graduated from college with a bachelor’s in economics, a minor in business and $30,000 in student debt. The Millennial Obsession With Self-Care. When it comes to millennials, it's likely no surprise that the generation that takes advantage of the Internet the most is also the generation that devotes the most time and money to the $10 billion self-care industry. 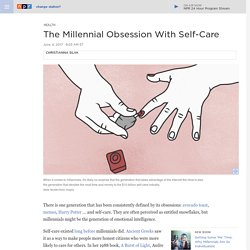 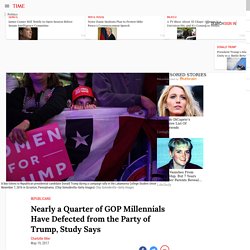 Overall, most people who identify with a certain party tend to maintain their political affiliation. But according to a Pew Research study about party loyalty, young Republicans are far more likely to switch parties than older Republicans or Democrats of any age. The researchers found that only about half of surveyed Republicans under 30 stayed steadfastly loyal to their party from 2015 on: 21% left the party but returned by March 2017, and 23% defected to the Democrats. 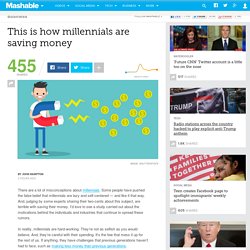 Some people have pushed the false belief that millennials are lazy and self-centered — and like it that way. And, judging by some experts sharing their two-cents about this subject, are terrible with saving their money. Millennials Aren't Going to Save Us  Here's what the Electoral College map would look like if only millennials voted. A real-time Electoral College tracking map suggests not only a disappointing Election Day for presidential hopeful Donald Trump, but potential trouble down the road for the Republican Party he represents. 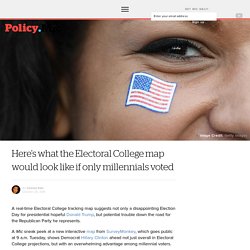 A Mic sneak peek at a new interactive map from SurveyMonkey, which goes public at 9 a.m. Tuesday, shows Democrat Hillary Clinton ahead not just overall in Electoral College projections, but with an overwhelming advantage among millennial voters. A total of 270 Electoral College votes are required to capture the presidency. In the 2016 election cycle, 69 million millennials are eligible to vote — a number equal to that of baby boomers. According to SurveyMonkey, which is offering mapping based on more than 30,000 interviews conducted since Oct. 8 and weighted by state-level voter demographics, Clinton dominates among the younger set. "The data among millennials point to big and widespread advantages for Clinton heading into the final stretch.

The Millennial Housing Trend Is a Repeat of the Middle Ages. For most of human history, people were hunter-gatherers. 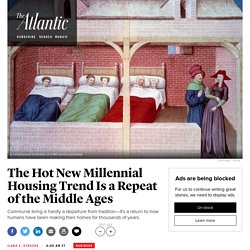 They lived in large camps, depending on one another for food, childcare, and everything else—all without walls, doors, or picket fences. In comparison, the number of people living in most households in today’s developed countries is quite small. According to the Census Bureau, fewer than three people lived in the average American household in 2010.

The members of most American households can be counted on one hand, or even, increasingly, one finger: Single-person households only made up about 13 percent of all American households in 1960. How Millennials Lack Of Manners Is Killing Class. You’re about to walk into a building and the girl in front of you just let’s the door go behind them and slam in your face; she didn’t even attempt to hold it open. 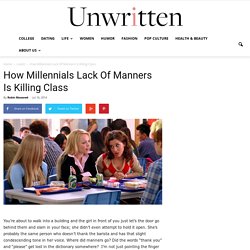 She’s probably the same person who doesn’t thank the barista and has that slight condescending tone in her voice. Where did manners go? Did the words “thank you” and “please” get lost in the dictionary somewhere? I’m not just pointing the finger at our generation but to all generations. Our society has become so involved with ourselves, so caught up in our wants and needs, that we feel we have this right to treat others anyway we want. 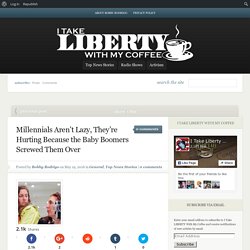 Millennials as defined by Pew as ages 18-34, number 75.4 million, slightly edging out Baby Boomers (ages 51-69) numbering 74.9 million. Millennials also have a few other things going for them, however not in a good way. As the WSJ reports, Millennials in New York City are earning about 20% less than the previous generation of workers, and they are absolutely drowning in $14 billion in debt. The average working 23-year old in New York City earned $23,543 compared to $27,731 in 2000 (adj. for inflation). Millennials: The Me Me Me Generation. Correction Appended: May 9, 2013 I am about to do what old people have done throughout history: call those younger than me lazy, entitled, selfish and shallow.

But I have studies! The one-word response to "Why Do Millennials Want Democratic Socialism?" That was a question asked of me at work. Actually, the question was “Why is my kid a Socialist"? I try very hard to keep my politics separate from my work life. I hypocritically lecture some of the younger workers to keep their mouths shut on their political views. Why Millennials Are About to Leave Cities in Droves. As businesses and governments have struggled to understand the so-called millennials—born between roughly 1980 and 2000—one frequent conclusion has been that they have a unique love of cities. Battleground youth vote: These are the states and districts that millennials will matter most in 2016.

Monday’s Iowa Caucus results showed that Senator Bernie Sanders won the youth vote overwhelmingly with 84 percent over former Secretary Hillary Clinton’s 14 percent. But the most concerning thing about the caucus was that young voters didn’t caucus for democrats the way they did in 2008. That year millennials caucused overwhelmingly for Democrats (52,580 people) over Republicans (12,650 people). This year that number was Democrats: 30,800 and Republicans: 22,415. Friday, the Center for Information and Research on Civic Learning and Engagement (CIRCLE) released a report on which states will matter most for getting out the youth vote for the 2016 presidential race and for US Senate races as well as which Congressional districts. The Youth Electoral Significance Index (YESI), understandably, lists swing states that will matter most for the presidential election.

Hilton Debuts New Chain to Win Over Millennials. Millennials can't spell, unorthodox experiment shows. Photo by Sean Gallup/Getty Images. Why Generation Y is unhappy. Say hi to Lucy. Lucy is part of Generation Y, the generation born between the late 1970s and the mid 1990s. She’s also part of a yuppie culture that makes up a large portion of Gen Y. Millennials Make Up Almost Half of Latino Eligible Voters in 2016. Youth, Naturalizations Drive Number of Hispanic Eligible Voters to Record 27.3 Million By Jens Manuel Krogstad, Mark Hugo Lopez, Gustavo López, Jeffrey S. Passel and Eileen Patten Hispanic millennials will account for nearly half (44%) of the record 27.3 million Hispanic eligible voters projected for 2016—a share greater than any other racial or ethnic group of voters, according to a new Pew Research Center analysis of U.S.

Census Bureau data. Millennials Prefer Sanders to Clinton. Photo Credit: via YouTube The latest Rock The Vote/USA Today poll outlines the political leanings of the millennial generation, 18- to 35-year-olds. If the Democratic primary were held today, Sanders has an 11-point lead over Clinton, with young voters supporting Sanders at 46 percent and Clinton at 35 percent. Davos should turn its attention to the world's generational crisis. As the World Economic Forum opens in Davos, one subject of discussion has already clearly emerged. Gun Culture and the American Nightmare of Violence - BillMoyers.com. Jaden Adams person look over a unloaded semi automatic handgun during a packed class to obtain the Utah concealed gun carry permit, at Range Master of Utah, on January 9, 2016 in Springville, Utah. (Photo by George Frey/Getty Images) This post originally appeared at Truthout.

Gun violence in the United States has produced a culture soaked in blood – a culture that threatens everyone and extends from accidental deaths, suicides and domestic violence to mass shootings. The millennials must keep up the pressure following the Paris climate deal. I was 15, sitting on a London tube headed for the Houses of Parliament with my mum, when she leant forward and warned me that she might be about to get arrested. More than half of millennials have less than $1,000. The Millennial Advantage: How This Determined Generation Will Succeed - Indeed Blog. Millennials: Coming of age. Here’s why millennials should stick to renting and ignore advice to buy a home. Millennial matchmaking: Online options complicate love. Typical Millennials Should Allocate At Least 25% Of Their Portfolio To This Specific Asset Class.

Survey: Half of black millennials know of police violence. 'We Will Not Be Tricked': Why Millennials Really Love Bernie Sanders. Signs You Are a Millennial Mom. For the love of God, millennials, you should be saving money. Vice Advises Major Brands on How to Market to Millennials. Student Loan Debt Devastates Millennials, Impacts Economy : Latin Statistics. Old School Professional Advice for Millennials.

Young women, give up the vocal fry and reclaim your strong female voice. Young Women Often Trendsetters in Vocal Patterns. Millennials: How Gen Y Will Lead Us Into the Future. 401(k) Or Roth IRA: Which Is Best? Reality Is Winning: New Poll Finds Americans Increasingly Aren’t Buying Right... Millennials are actually more generous than anybody realizes - The Washington... Why Our Children Don't Think There Are Moral Facts - The New York Times. Pizza_hut_s_bid_to_be_hip_why_millennials_didn_t_fall_for_the_chain_s_peruvian. Oh, to Be Young, Millennial, and So Wanted by Marketers.

Clarence Thomas opinion in Brumfield v. Cain: Has he forgotten he’s a Supreme Court justice? Charleston, Dylann Roof and the racism of millennials. Tell-Tale Signs of the Modern-Day Yuppie. Millennials’ Parents Can’t Stop Meddling. One-Third Of Millennials Who Left Their Religion Did It Because Of Anti-Gay Policies: Survey. Millennials leaving church in droves, study says. Why Ted Cruz Is Trying To Appeal To Millenials And Why He Will Ultimately Fail. Gen Y Consumers More Interested in Hybrids, Electric Cars Than Traditional Gas-Powered Vehicles.

The Politics Of The Millennial Generation. Millennials love cities because they provide the one thing their boomer parents couldn’t give them. Fixing Our Relationship with Millennials. Millennials Want Companies That Work On Innovative Ways To Fix The World. 5 Ways Millennials Will Shape the Future of Work. The Stunning Evolution of Millennials: They've Become the Ben Franklin Generation  How Millennials Are Reshaping Charity And Online Giving : All Tech Considered. Thom Hartmann: Are Millennials Lazy, Self-Absorbed and Needy? Millennials aren't using credit cards, and it might come back to haunt them. For millennials, out-of-wedlock childbirth is the norm. Now what? Millennial Marriage, Sex and the Search For Long Term Relationships.