40 Photo-Illustrated Questions to Refocus Your Mind 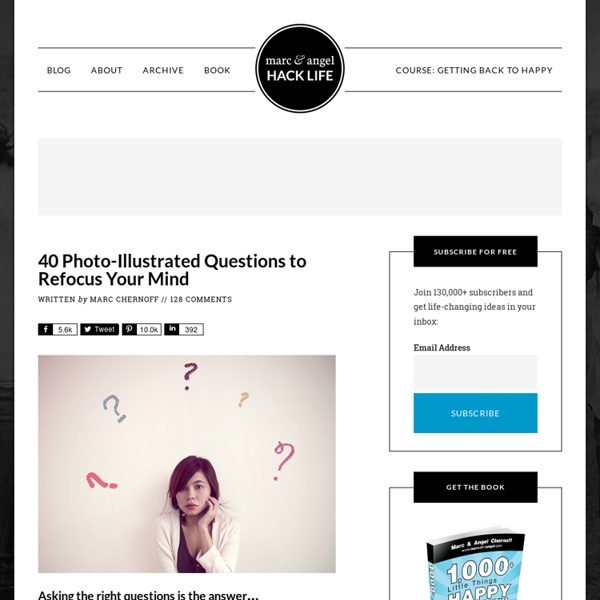 Asking the right questions is the answer… It’s not the answers you get from others that will help you, but the questions you ask of yourself. Here are 40 thought-provoking questions to help you refresh and refocus your thinking: Please share your thoughts with us in the comments section below. Also, check out our sister site, Thought Questions, for more photo-illustrated questions like these; and check out The Book of Questions if you’re interested in reading even more inspiring, thought-provoking questions.Title photo by: Helga Weber For all other photo credits please refer to ThoughtQuestions.com Related 40 Questions Everyone is Afraid to Ask Judge a man by his questions rather than his answers. April 13, 2012 In "Aspirations" 40 Questions that Will Quiet Your Mind Judge a person by their questions, rather than their answers … because asking the right questions is the answer. August 5, 2015 In "Happiness" 25 Photo-Illustrated Reminders to Help You Find Happiness

wait but why: Why Generation Y Yuppies Are Unhappy Say hi to Lucy. Lucy is part of Generation Y, the generation born between the late 1970s and the mid 1990s. She’s also part of a yuppie culture that makes up a large portion of Gen Y. I have a term for yuppies in the Gen Y age group—I call them Gen Y Protagonists & Special Yuppies, or GYPSYs. A GYPSY is a unique brand of yuppie, one who thinks they are the main character of a very special story. 40 Questions Everyone is Afraid to Ask Judge a man by his questions rather than his answers. -Voltaire …because asking the right questions is the answer. Please share your thoughts with us in the comments section below. Also, check out our sister site, Thought Questions, for more photo-illustrated questions like these; and check out The Book of Questions

High school persuasive writing prompts High school students can practice their persuasive writing skills with these engaging persuasive writing prompts. Whether they’re trying to convince a friend to watch less TV, volunteer at the local food bank, or read an amazing book, they’ll find the perfect prompt below. 1. Teen Couch Potatoes Research shows that the average American teen spends up to 40 hours in front of television and computer screens each week. Do you think this is too much? 100 Websites You Should Know and Use Entertainment Meet David Peterson, who developed Dothraki for Game of Thrones There are seven different words in Dothraki for striking another person with a sword. Among them: “hliziﬁkh,” a wild but powerful strike; “hrakkarikh,”a quick and accurate strike; and “gezrikh,” a fake-out or decoy strike. But you won’t find these words in George R.

The 9 Epiphanies That Shifted My Perspective Forever - Global One TV - StumbleUpon By David Over the years I’ve learned dozens of little tricks and insights for making life more fulfilling. They’ve added up to a significant improvement in the ease and quality of my day-to-day life. Me, My Selfie and I See also: 7 Tips For Great Selfies It's official: 2013 is the year that the selfie came into its own. The self-taken mobile photo now boasts its own art exhibition as well as a new linguistic status—Oxford Dictionaries just added the word in August, making it a legitimate part of the English language.

Addicted to Checking Your Email? This Flow Chart Might Help  Wendy MacNaughton is an illustrator and a graphic journalist based in San Francisco. See more writing and illustrations on her website: wendymacnaughton.com. This image is featured in the new book The Best American Infographics 2013, edited by Gareth Cook, with an introduction by David Byrne. Read more about the book in this article from BrainPickings.org. Writer’s Digest - Writing Prompts Write a scene that includes a character speaking a different language, speaking in a thick accent, or otherwise speaking in a way that is unintelligibe to the other characters. (Note: You don't necessarily need to know the language the character is speaking—be creative with it!) Describe a character's reaction to something without explaining what it is. See if your fellow prompt responders can guess what it is. Write a story or a scene about one character playing a prank on another. Describe the scene from both characters' points of view.

Make My Package is a leading Online booking Platform for Hotels & Tour Packages. logo PRLog (Press Release) - Apr. 29, 2011 - Make my package is one of the leading online booking platform where user can book domestic and international holiday packages,hotel rooms, flight tickets, Train Tickets,Visa,Passport,Insurance etc.It is revolutionizing theTravel industry in India by using technology to improve customer satisfaction .One can get information about hotel rooms in india as well as abroad,Cheap foreign hotel bookings,Domestic Packages, International tour packages, Flight(domestic/international), special room in india, hotels in kerala, hotels in orissa, Beach tours,Tribal Tours,Cultural Tours,Wildlife tours,Temple tours,Car rentals, Airline & Train Ticketing,Hotel reservation across the length and breadth of the World. We try our best to meet customer demands and put more information related to hotes and tour bookings.Time to time we also provide with special promotional offers from our associated companies from which customer can benefit a lot. Photo:

Art Crush: (365) Days of Tumblr by Aaron Christopher Judd - Art Crush By Abby Wilcox 12 Feb 2012 @ 2:57 pm | Categorized: Art Crush, Live_Art> Every once in a while I stumble across something that pops off the screen, and today I couldn’t help but be mesmerized by (365) days of Tumblr – a Tumblr site by Canadian designer Aaron Christopher Judd. It’s a typography experiment, in which Judd has married a quote with an image, and posted on for every day of the year. 11 of the Best Infographic Designs of 2015 Infographics that really stand out are far more than just a smattering of pictures and charts. They might tell an engaging story -- one built around compelling data, graphics, or illustrations. Or perhaps they serve as a really helpful visual resource. Thirteen Writing Prompts. [Originally published May 4, 2006.] Write a scene showing a man and a woman arguing over the man’s friendship with a former girlfriend. Do not mention the girlfriend, the man, the woman, or the argument.