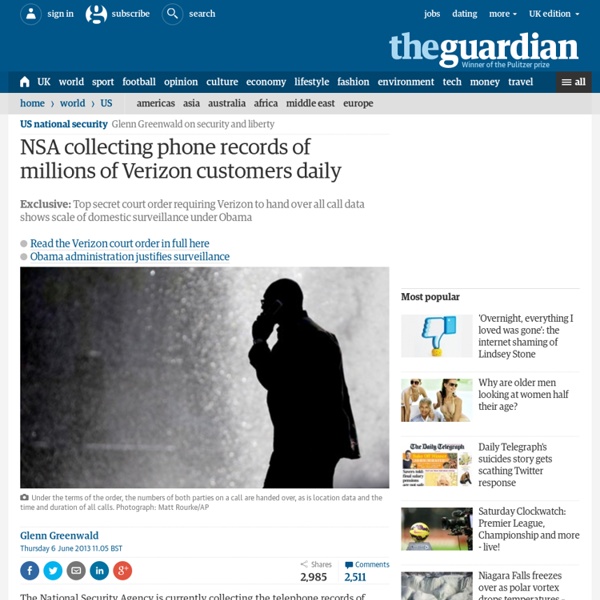 The National Security Agency is currently collecting the telephone records of millions of US customers of Verizon, one of America's largest telecoms providers, under a top secret court order issued in April. The order, a copy of which has been obtained by the Guardian, requires Verizon on an "ongoing, daily basis" to give the NSA information on all telephone calls in its systems, both within the US and between the US and other countries. The document shows for the first time that under the Obama administration the communication records of millions of US citizens are being collected indiscriminately and in bulk – regardless of whether they are suspected of any wrongdoing. The secret Foreign Intelligence Surveillance Court (Fisa) granted the order to the FBI on April 25, giving the government unlimited authority to obtain the data for a specified three-month period ending on July 19. The unlimited nature of the records being handed over to the NSA is extremely unusual.

NSA taps in to systems of Google, Facebook, Apple and others, secret files reveal The National Security Agency has obtained direct access to the systems of Google, Facebook, Apple and other US internet giants, according to a top secret document obtained by the Guardian. The NSA access is part of a previously undisclosed program called Prism, which allows officials to collect material including search history, the content of emails, file transfers and live chats, the document says. The Guardian has verified the authenticity of the document, a 41-slide PowerPoint presentation – classified as top secret with no distribution to foreign allies – which was apparently used to train intelligence operatives on the capabilities of the program. The document claims "collection directly from the servers" of major US service providers.

NSA files decoded: Edward Snowden's surveillance revelations explained Two factors opened the way for the rapid expansion of surveillance over the past decade: the fear of terrorism created by the 9/11 attacks and the digital revolution that led to an explosion in cell phone and internet use. But along with these technologies came an extension in the NSA’s reach few in the early 1990s could have imagined. Details that in the past might have remained private were suddenly there for the taking. Chris Soghoian

Wiretaps through Software Hacks to Get Legal Scrutiny Earlier this year a group of researchers published a controversial idea for giving law enforcement access to suspicious electronic communications. Instead of forcing tech companies like Facebook and Google to build backdoors into their software, the researchers suggested law enforcement simply exploit existing vulnerabilities in Web software to plant their digital wiretaps. This approach would turn security-compromising software bugs—a bane of software companies and their customers for the past couple of decades—into a tool for gathering evidence against criminals communicating via voice-over-IP (VoIP) calls, instant messaging, some video game systems and other Internet-based channels. Although the researchers made clear that the FBI and other agencies should obtain a court order before placing their digital wiretaps, the proposal raises more than a few thorny legal questions. Skeptics say that much more scrutiny is necessary for a proposal as unorthodox as “Going Bright.”

Race and class matters: All's not equal when it comes to the government's big data habit Above: Affected children protest the fingerscanning requirement in Jackson, MS (Note: This is somewhat unrelated, but for Apple iPhone users, very important. Click here to learn how to opt-out of automated tracking in iOS 6.) Edward Snowden: the whistleblower behind the NSA surveillance revelations The individual responsible for one of the most significant leaks in US political history is Edward Snowden, a 29-year-old former technical assistant for the CIA and current employee of the defence contractor Booz Allen Hamilton. Snowden has been working at the National Security Agency for the last four years as an employee of various outside contractors, including Booz Allen and Dell. The Guardian, after several days of interviews, is revealing his identity at his request. From the moment he decided to disclose numerous top-secret documents to the public, he was determined not to opt for the protection of anonymity. "I have no intention of hiding who I am because I know I have done nothing wrong," he said. Snowden will go down in history as one of America's most consequential whistleblowers, alongside Daniel Ellsberg and Bradley Manning.

Nation Mostly Alarmed That Government’s Top Programs Handled By 29-Year-Olds WASHINGTON—Following reports Sunday that the source of the leaked National Security Agency surveillance practices is 29-year-old government contractor Edward Snowden, polls revealed today that beyond concerns about privacy, Americans are primarily distressed that sensitive government programs are apparently being managed by kids who were still in high school when 9/11 happened. “Sure, this raises troubling questions about liberty and security, but what’s really bothering me here is that there are people in very high positions handling national security matters of grave importance who are the same age as my son,” Virginia resident Karen Linder said of the Gen-Y whistleblower. “He’s had, what, six years of experience? Let’s get some older guys in there. How about someone in his 40s who’s lived a little bit, who’s maybe old enough to have voted in more than two elections.”

A Timeline: Wiretapping’s Checkered Past, NSAgate, PRISM and Whistleblower Edward Snowden The National Security Agency and the US government in general is being bombarded with criticism regarding NSAgate. When news of the NSA’s data mining operations surfaced, not many news outlets or people were altogether surprised–having suspected something had been going on all along–however, the extent thereof and the type have been veiled in so much secrecy and had become so much more agressive since 9/11 it’s difficult to know what’s been done or how it’s been done and especially how that affects the very security and privacy of common citizens. Wiretapping itself (especially the secret type) goes far back, way back, to a time when you or I hadn’t even been born, heck even before our parents or grandparents haven’t been conceived. Wiretapping Timeline 1861-1865 – During the Civil War, President Abraham Lincoln reportedly read wiretapped messages sent from enemy camps’ telegraph lines.

newyorker President Obama spent only a few moments of his State of the Union this week talking about the National Security Agency and civil liberties. A year before, he’d promised to “end” Section 215, the N.S.A.’s most controversial surveillance program, “as it currently exists.” In his speech last Tuesday, he said almost nothing concrete, aside from mentioning a forthcoming report “on how we’re keeping our promise to keep our country safe while strengthening privacy.” Since Edward Snowden revealed the extent of the N.S.A.’s activities in the summer of 2013, there have been a number of official reports on the troubled relationship between surveillance and privacy—one from the President’s Review Group, two from the Privacy and Civil Liberties Oversight Board, and another, last week, from the National Academy of Sciences. But, while the government has made some moves toward transparency about its surveillance programs, it has enacted few substantial reforms of them.

The Government Has No Right To Pry Into What Goes On In The Privacy Of Your Home I’ve been keeping up with the news recently, and as you’ve probably seen, this last week has been marked by several shocking revelations concerning the conduct of the National Security Agency and the federal government’s overall attitudes toward the privacy of the American people. It’s spawned a vigorous debate, but to me, the answer couldn’t be any clearer: No matter what pretexts the presidential administration might have about protecting the American people, the government simply does not have the right to poke their nose into what goes on in the privacy of your own home. Bottom line: Your home is your sanctuary. And in your home, you should be able to do whatever you want for how long you want without worrying about someone spying on you.

HBGary, Palantir, Prism, Facebook & The Industrial Surveillance Complex Two years ago, a batch of stolen e-mails revealed a plot by a set of three defense contractors (Palantir Technologies, Berico Technologies and HBGary Federal) to target activists, reporters, labor unions and political organizations. The plans— one concocted in concert with lawyers for the US Chamber of Commerce to sabotage left-leaning critics, like the Center for American Progress and the SEIU, and a separate proposal to “combat” WikiLeaks and its supporters, including Glenn Greenwald, on behalf of Bank of America— fell apart after reports of their existence were published online. But the episode serves as a reminder that the expanding spy industry could use its government-backed cyber-tools to harm ordinary Americans and political dissident groups. “I think we need to highlight people like Glenn Greenwald. Glenn was critical in the Amazon to OVH [data center] transition and helped WikiLeaks provide access to information during the transition.

FOIA Documents Reveal Massive DEA Program to Record American’s Whereabouts With License Plate Readers The Drug Enforcement Administration has initiated a massive national license plate reader program with major civil liberties concerns but disclosed very few details, according to new DEA documents obtained by the ACLU through the Freedom of Information Act. The DEA is currently operating a National License Plate Recognition initiative that connects DEA license plate readers with those of other law enforcement agencies around the country. A Washington Post headline proclaimed in February 2014 that the Department of Homeland Security had cancelled its “national license-plate tracking plan,” but all that was ended was one Immigrations and Customs Enforcement solicitation for proposals. In fact, a government-run national license plate tracking program already exists, housed within the DEA.