A* Pathfinding for Beginners 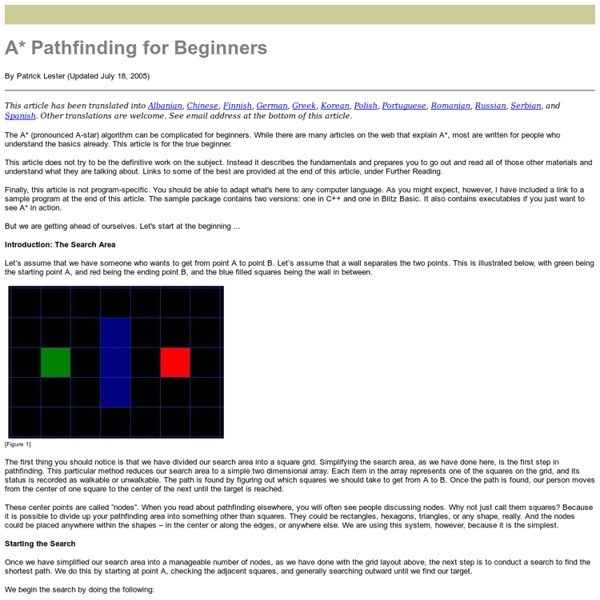 By Patrick Lester (Updated July 18, 2005) This article has been translated into Albanian, Chinese, Finnish, German, Greek, Korean, Polish, Portuguese, Romanian, Russian, Serbian, and Spanish. Other translations are welcome. See email address at the bottom of this article. The A* (pronounced A-star) algorithm can be complicated for beginners. This article does not try to be the definitive work on the subject. Finally, this article is not program-specific. But we are getting ahead of ourselves. Introduction: The Search Area Let’s assume that we have someone who wants to get from point A to point B. [Figure 1] The first thing you should notice is that we have divided our search area into a square grid. These center points are called “nodes”. Starting the Search Once we have simplified our search area into a manageable number of nodes, as we have done with the grid layout above, the next step is to conduct a search to find the shortest path. We begin the search by doing the following: where 1.

The Guide to Implementing 2D Platformers - Game Programming This article was written by Rodrigo Monteiro and originally published on his own blog at Higher-Order Fun and reprinted on our site (thanks to Rodrigo) in order to provide everyone with this great resource. Having previously been disappointed by the information available on the topic, this is my attempt at categorizing different ways to implement 2D platform games, list their strengths and weaknesses, and discuss some implementation details. The long-term goal is to make this an exhaustive and comprehensible guide to the implementation of 2D platform games. If you have any sort of feedback, correction, request, or addition – please leave it in the comments! Disclaimer: some of the information presented here comes from reverse engineering the behavior of the game, not from its code or programmers. I can think of four major ways in which a platform game can be implemented. Type #1: Tile-based (pure) Character movement is limited to tiles, so you can never stand halfway between two tiles.

Step by Step: Alpha Beta Pruning Math for Game Developers Video Series I've launched a new Youtube series, Math for Game Developers. Each week I'll be showing how to solve a new problem in game development using math, and I'll be building up a math toolkit that you can use to solve any game dev problem. 1. Moving a character with vectors: 2. More moving characters: 3. 4. 5. This is very basic stuff, just showing the basics of vector maths, buteventually I'll be progressing to explaining the math behind moreadvanced things. I hope to help out people who are just starting their game dev career soplease let me know if I can improve the videos (other than the lowquality audio, a problem I'm working on) or if you didn't understandsomething

A* search N Tutorial B - Broad-Phase Collision SECTION 3: Object Grid The grid structure described above can also double as a spatial database used to manage dynamic objects. Just as each cell contains information about the tile located in that cell, it can also contain information about each dynamic object currently located in the cell. Each cell contains a list of dynamic objects; as an object moves through the grid, we insert/remove it from each cell's list as appropriate. There are two approaches that can be taken when using a grid with dynamic objects: "normal" grid: each object is associated with all of the cells it touches. . pros: each object needs to look in at most 4 cells to find other objects it might collide with . cons: each object needs to be inserted/removed from up to 4 cells every time it moves; also, additional logic needs to be added to the collision code to deal with a case where, for instance, two objects touch the same two cells. In our implementation, each cell has: and each object has: --= more details =--

Java tree data-structure Animating With Asset Sheets: An Alternative to Blitting So you've got your awesome game in the works, it's got all sorts of complex physics, epic enemy AI or what-have-you. But it feels lifeless. You want some OOMPH, you want some animation! If you go and look up how to animate, the first answer you come across will most likely be a method using spritesheets and blitting. This method could be called animating with asset-sheets - or more technically, tweening with asset-sheets - as opposed to using sprite-sheets. What's Wrong With Blitting? Below are some reasons as to why you would not want to use blitting in certain cases. 1. Whether we're talking about RAM or disk space, sprite sheets can easily clog things up. 2. What happens when you want to speed up an animation? And what if you wanted something to happen when the player's arms reached some place? 3. What happens when the player is running and suddenly jumps? The Alternative This isn't even very new. So to summarize: Let's Dive Right In This is a character and his asset sheet. This is a door:

Alpha–beta pruning History[edit] Improvements over naive minimax[edit] An illustration of alpha–beta pruning. The benefit of alpha–beta pruning lies in the fact that branches of the search tree can be eliminated. . An animated pedagogical example that attempts to be human-friendly by substituting initial infinite (or arbitrarily large) values for emptiness and by avoiding using the negamax coding simplifications. Normally during alpha–beta, the subtrees are temporarily dominated by either a first player advantage (when many first player moves are good, and at each search depth the first move checked by the first player is adequate, but all second player responses are required to try to find a refutation), or vice versa. The algorithm maintains two values, alpha and beta, which represent the maximum score that the maximizing player is assured of and the minimum score that the minimizing player is assured of respectively. Pseudocode[edit] Heuristic improvements[edit] Other algorithms[edit] See also[edit]