What Should I Read Next? Book recommendations from readers like you 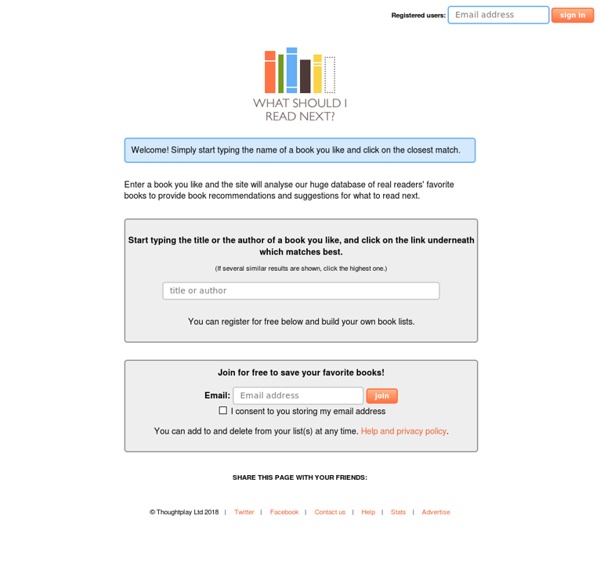 The Y.A./Middle-Grade Book Awards It was a year of countless great books in the categories of young adult and middle-grade fiction and nonfiction, buoyed not only by content but by that all-important publishing mark of sales. "The children’s and Y.A. category grew by more than 196 percent in August," according to an Association of American Publishers report, outpacing adult literature sales by leaps and bounds. But even prior to that news there were signs this was shaping up to be an unprecedented year of Y.A., what with growing numbers of adults reading the books (helped along by the popularity of The Hunger Games, of course) and growing numbers of people writing about that trend (including here, in this column). NPR Books' summer poll of the year focused on Y.A., identifying 100 of the greatest teen novels ever. 1.

Open Circle Names 25 Best Books for Kids’ Social and Emotional Learning To celebrate its 25th anniversary, the Open Circle Program at the Wellesley Centers for Women (WCW), a provider of evidence-based social and emotional learning for K–5 kids, has released its list of the top 25 children’s books that connect to kids’ social and emotional development. The chosen books cover a range of important skills, such as self-awareness, self-management, empathy, dealing with conflict, and problem-solving. The Hundred Dresses, by Eleanor Estes, tops the list. 30 Classic Books That May Change Your Life A classic novel need not be one that was penned a hundred years ago: rather, some of the traits that define the classic genre are timelessness, universality, truthfulness. Will this work remain relevant as time goes by? Can the reader learn something heartfelt from the story? Does the narrative flow beautifully? Does it resonate with the reader? If these questions can be answered with a hearty “yes!”

If you die in the game, you die in REAL LIFE - books mmorpg sciencefiction Help me find books (or other media) about people playing RPGs. I'm looking for books, movies, comics, what have you (but preferably books!) where a substantial part of the story focusses on people playing RPGs. To be more specific, I'm looking for variations on the 'it's the future and there's this total immersion MMORPG everyone's playing' theme.

Top 5 Best Comic Book Android Readers Google Android Tablets are certainly becoming more popular and many new devices are issued each and every month. Many people more and more are purchasing these new devices and wanting to take advantage of the full color touchscreen to read comic books. Good e-Reader has assembled the best list to read comic books on your Android powered tablet computer to get the most out of your device! I really think comics look way better on tablets, and all of the frames normally come out really well, not to mention you can store thousands on your device.

YALSA's Teen Book Finder for Android & iOS YALSA's Teen Book Finder is a free app to help teens, parents, librarians and library staff, educators, and anyone who loves YA literature access to the past five years' of YALSA's awards and lists on their smartphone. Have an Android phone? Download the Android version now! The Inspiring Stories Behind 15 Classic Novels  According to Jack London, "You can't wait for inspiration, you have to go after it with a club." London himself took the inspiration for The Call of the Wild (1903) from his time spent living in Canada and Alaska during the Klondike Gold Rush when high-quality sled dogs -- like those that feature in the book -- were in impossibly high demand. The stories and inspirations behind fifteen more of literature's most memorable titles are explained here: Anna Karenina (1877), Leo Tolstoy In January 1872, the death of a 35-year-old woman was reported in the Russian press: smartly dressed and carrying a bag containing a change of clothes, the girl had thrown herself under a freight train at Yasenki Station outside Moscow. The woman was identified as Anna Pirogova, a distant relative of Leo Tolstoy's wife and the mistress of his good friend and neighbour, Alexander Bibikov.

8 Books For a Higher Existence Books are magical inventions. By carrying meaning, they gives us glimpses of experience and knowledge from a different world. Phonetic language, being cut-off from time and place, the Now, helps both to encapsulate the ego more, but also to offer guidance to make it poriferous, letting Eros free. Seven SF novels for radicals, utopians, and dreamers So what is SF? Partially a hazy roadmap, partially a utopian dream, and very often a mirror of present conditions, the genre resists settled categorisation just as it resists elevation to the hallowed heights of literary fiction. Where to start?

50 Must-Read Social Psychology Books Reading is the supreme “lifehack” — distilled knowledge that often took years to assemble can be consumed in just a few hours. And the more you know about social psychology and human behavior, the better. At Help Scout we have learning stipend (here’s why) for our teammates so you can buy as many books as you need. You’re probably not surprised to hear that I’ve built myself quite the collection of psychology books.

Printz Award The Michael L. Printz Award is an award for a book that exemplifies literary excellence in young adult literature. It is named for a Topeka, Kansas school librarian who was a long-time active member of the Young Adult Library Services Association. The award is sponsored by Booklist, a publication of the American Library Association.