Theta*: Any-Angle Path Planning for Smoother Trajectories in Continuous Environments. This article was written by Alex Nash, a Ph.D. candidate at the University of Southern California, specializing in path planning for video games and robotics. 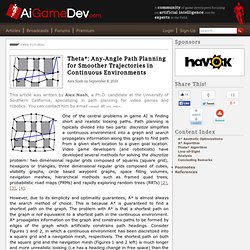 You can contact him by email <anash at usc.edu>. One of the central problems in game AI is finding short and realistic looking paths. Path planning is typically divided into two parts: discretize simplifies a continuous environment into a graph and search propagates information along this graph to find path from a given start location to a given goal location. Video game developers (and roboticists) have developed several methods for solving the discretize problem: two dimensional regular grids composed of squares (square grid), hexagons or triangles, three dimensional regular grids composed of cubes, visibility graphs, circle based waypoint graphs, space filling volumes, navigation meshes, hierarchical methods such as framed quad trees, probabilistic road maps (PRMs) and rapidly exploring random trees (RRTs) [2], [3], [4].

Www.ru.is/faculty/yngvi/pdf/BjornssonH06.pdf#pdfjs.action=download. How to Speed Up A* Pathfinding With the Jump Point Search Algorithm – Tuts+ Tutorials. PathFinding.js. Click within the white grid and drag your mouse to draw obstacles. 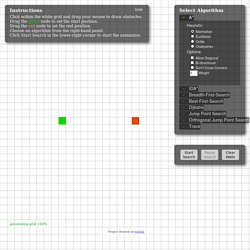 Drag the green node to set the start position. Drag the red node to set the end position. Choose an algorithm from the right-hand panel. Jump Point Search. This is the final article in my three-part look at symmetry reduction algorithms for speeding up pathfinding on uniform-cost grid maps. 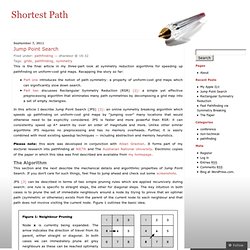 Recapping the story so far:Part one introduces the notion of path symmetry: a property of uniform-cost grid maps which can significantly slow down search. Part two discusses Rectangular Symmetry Reduction (RSR) [2]: a simple yet effective preprocessing algorithm that eliminates many path symmetries by decomposing a grid map into a set of empty rectangles. In this article I describe Jump Point Search (JPS) [3]: an online symmetry breaking algorithm which speeds up pathfinding on uniform-cost grid maps by “jumping over” many locations that would otherwise need to be explicitly considered. JPS is faster and more powerful than RSR: it can consistently speed up A* search by over an order of magnitude and more.

Unlike other similar algorithms JPS requires no preprocessing and has no memory overheads. The Algorithm Figure 1: Neighbour Pruning Screenshots. MNFIT272 AI class: Lecture 3. A* Search Algorithm in C# - Cody Stebbins' Blog - Quora. Just a heads up I haven't tested this code in about 3 years. 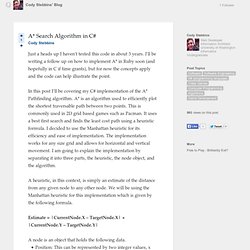 I'll be writing a follow up on how to implement A* in Ruby soon (and hopefully in C if time grants), but for now the concepts apply and the code can help illustrate the point. In this post I’ll be covering my C# implementation of the A* Pathfinding algorithm. A* is an algorithm used to efficiently plot the shortest traversable path between two points. This is commonly used in 2D grid based games such as Pacman. It uses a best first search and finds the least cost path using a heuristic formula. A heuristic, in this context, is simply an estimate of the distance from any given node to any other node.

Estimate = |CurrentNode.X – TargetNode.X| + |CurrentNode.Y – TargetNode.Y| A node is an object that holds the following data. Now time to explain the actual algorithm. The real work of the algorithm come in the while loop. A* Pathfinding for Beginners. By Patrick Lester (Updated July 18, 2005) This article has been translated into Albanian, Chinese, Finnish, German, Greek, Korean, Polish, Portuguese, Romanian, Russian, Serbian, and Spanish. 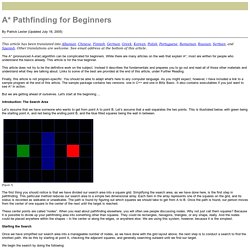 Other translations are welcome. See email address at the bottom of this article. The A* (pronounced A-star) algorithm can be complicated for beginners. While there are many articles on the web that explain A*, most are written for people who understand the basics already. This article does not try to be the definitive work on the subject. Finally, this article is not program-specific. But we are getting ahead of ourselves. Introduction: The Search Area Let’s assume that we have someone who wants to get from point A to point B.

[Figure 1] The first thing you should notice is that we have divided our search area into a square grid. These center points are called “nodes”. Starting the Search We begin the search by doing the following: [Figure 2] Path Scoring. Toward More Realistic Pathfinding. Pathfinding is a core component of most games today. 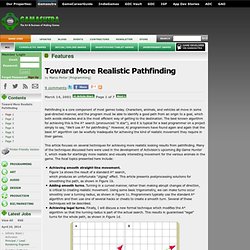 Characters, animals, and vehicles all move in some goal-directed manner, and the program must be able to identify a good path from an origin to a goal, which both avoids obstacles and is the most efficient way of getting to the destination. The best-known algorithm for achieving this is the A* search (pronounced "A star"), and it is typical for a lead programmer on a project simply to say, "We'll use A* for pathfinding. " However, AI programmers have found again and again that the basic A* algorithm can be woefully inadequate for achieving the kind of realistic movement they require in their games.

This article focuses on several techniques for achieving more realistic looking results from pathfinding. Many of the techniques discussed here were used in the development of Activision's upcoming Big Game Hunter 5, which made for startlingly more realistic and visually interesting movement for the various animals in the game. Toward More Realistic Pathfinding.