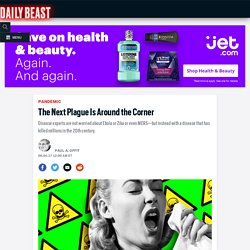 It’s Fauci’s job to stop plagues before they start. Recently, Fauci was asked which infection scared him the most. The questioner assumed that he would say Ebola or Zika or MERS or SARS—all infections for which no vaccines and no anti-viral medicines are commercially available. But he didn’t. “Pandemic influenza,” he said. Fauci isn’t the only one talking about pandemic flu these days. Our fear of an influenza pandemic is best explained by the derivation of the word pandemic, meaning “all people. . ” • Between 1918 and 1919, Spanish influenza infected up to 40 percent of the world’s population, killing 50 million people. . • Between 1957 and 1958, Asian influenza killed 4 million people in the world and 70,000 in the United States. One month later, Hilleman received throat washings from a navy serviceman infected with the virus. Electrified graphene becomes a bacterial bug zapper. A radical view for age of superbugs: Don't fight infections. Live with them.

A JOLLA, Calif. — As her father lay dying of sepsis, Janelle Ayres spent nine agonizing days at his bedside. 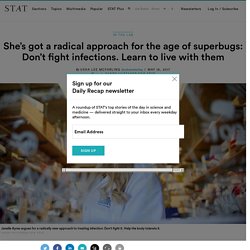 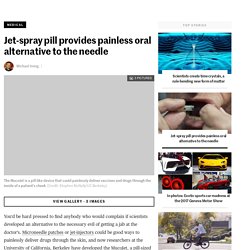 Microneedle patches or jet-injectors could be good ways to painlessly deliver drugs through the skin, and now researchers at the University of California, Berkeley have developed the MucoJet, a pill-sized device that blasts vaccines through the inside of the cheek without pain or a professional. A Woman Just Died From an Infection No U.S. Antibiotics Could Beat. The woman from Washoe, Nevada was in her 70s and had an infection in her hip. 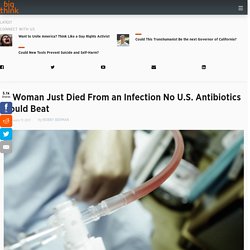 She’d contracted it in a hospital in India after fracturing her leg. Doctors in Reno attempted to tame her infection, trying every antibiotic they had. 26 in all. None of them worked, not even colistin, their last line of defense. The woman died. Brazilian berry extract stops a superbug in its tracks. Superbugs are on the rise, with a UK government report last year warning that they could kill 10 million people a year by 2050. 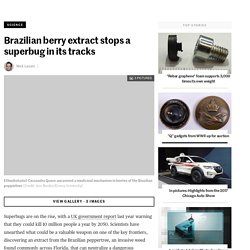 Scientists have unearthed what could be a valuable weapon on one of the key frontiers, discovering an extract from the Brazilian peppertree, an invasive weed found commonly across Florida, that can neutralize a dangerous antibiotic-resistant staph bacteria called Staphylococcus auereus. Methicillin-resistant Staphylococcus auereus is a type of staph bacteria that has become resistant to many common antibiotics. Once mostly limited to nursing homes and hospitals, it has more recently spread to more common places like schools and gyms, where it can cause skin infections, bloodstream infections, sepsis and death. The news isn't all bad on the MRSA front.

Decline of the dentist's drill? Drug helps rotten teeth regenerate, trial shows. Dentists have devised a treatment to regenerate rotten teeth that could substantially reduce the need for fillings in the future. 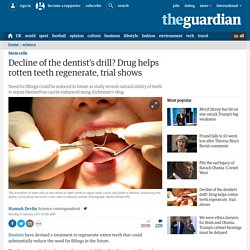 The therapy works by enhancing the natural ability of teeth to repair themselves through the activation of stem cells in the soft pulp at the centre. Normally, this mechanism is limited to repairing small cracks and holes in dentine, the solid bulk of the tooth beneath the surface enamel. Brain implant enables paralyzed woman to communicate by thought. Computers are going to become much better at repairing human cognitive and sensory-motor functions in the not-too-distant future, and the UMC achievement signifies another milestone in humanity's relationship with the computer. 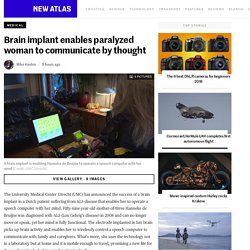 This announcement also marks a milestone in assisting and augmenting (not just repairing) human cognitive and sensory-motor functions, and gives us a peak at a future world where communication by thought alone might be possible. "This is a major breakthrough in achieving autonomous communication among severely paralyzed patients whose paralysis is caused by either ALS, a cerebral hemorrhage or trauma," said Nick Ramsey, Professor of Cognitive Neuroscience at UMC Utrecht. "In effect, this patient has had a kind of remote control placed in her head, which enables her to operate a speech computer without the use of her muscles. " The speech computer is operated by Hanneke de Bruijne moving her fingers "in her mind. " Snake venoms’ deadly secret unlocked: study.

Scientists have discovered how venom from black mamba snakes (pictured) and cobras bind to nerve cells. 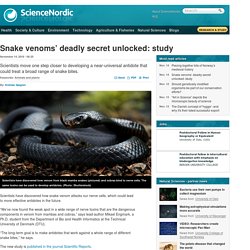 Cranberries crush bacteria's communication networks. They might not be as fashionable among the hipster set as kale but cranberries' health properties are undisputed. 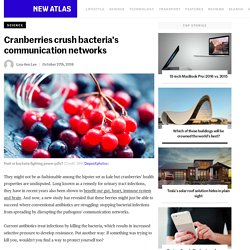 Long known as a remedy for urinary tract infections, they have in recent years also been shown to benefit our gut, heart, immune system and brain. And now, a new study has revealed that these berries might just be able to succeed where conventional antibiotics are struggling: stopping bacterial infections from spreading by disrupting the pathogens' communication networks. Current antibiotics treat infections by killing the bacteria, which results in increased selective pressure to develop resistance. Theconversation. In 1998, I received an intriguing handwritten note. 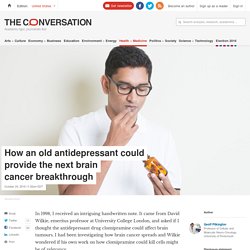 It came from David Wilkie, emeritus professor at University College London, and asked if I thought the antidepressant drug clomipramine could affect brain tumours. I had been investigating how brain cancer spreads and Wilkie wondered if his own work on how clomipramine could kill cells might be of relevance. This sparked a series of investigations over the last 18 years into how this old drug that was once commonly used as an antidepressant might find a new purpose in cancer treatment. Research has now linked it to increased survival rates for brain tumour patients and, because its patent has expired, it is cheaply available at less than 10p a tablet.

Clomipramine (sold under the brand name Anafranil) has been used for decades to treat patients with depression. But the evidence needed to change a drug’s licence so it can be prescribed for a specific condition can only be obtained with a robust clinical trial. Anecdotal evidence. FDA-approved drugs show promise for rapid and robust hair regrowth. Theconversation. We’ve known since the turn of the 20th century that some infectious diseases are a major risk for developing specific cancers.

More worryingly, about one-sixth of cancers worldwide are attributable to infectious agents. Globally, more than 2m cancer cases are linked to certain carcinogenic viral, bacterial or parasitic agents. Two-thirds of these occur in developing countries. Although we’ve been aware of the connection between parasites and cancer since before the 18th century, we’re increasingly linking certain parasites to an increased risk of developing specific forms of cancer.

What the world has learned about Zika so far. Only months ago, the world’s knowledge about the Zika virus was pretty paltry. So scant, in fact, that Dr. Tom Frieden, director of the Centers for Disease Control and Prevention, tweeted a picture of what he called “50 years of neglect” — a modest pile of scientific papers, not much thicker than a slim paperback. That was the sum total of Zika science. Scientists 'find cancer's Achilles heel' Image copyright SPL Scientists believe they have discovered a way to "steer" the immune system to kill cancers. Researchers at University College, London have developed a way of finding unique markings within a tumour - its "Achilles heel" - allowing the body to target the disease. But the personalised method, reported in Science journal, would be expensive and has not yet been tried in patients. Bats' 24/7 immunity holds clues to tackling infectious disease.

If bats were as susceptible to viruses like Ebola as humans are, then blindness would be the least of their worries. But despite serving as a natural host for more than 100 different viruses, these nocturnal mammals don't display any resulting signs of disease. Australian scientists are claiming to have now figured out why, in a revelation that potentially brings us a step closer to safeguarding the human population from Ebola and other deadly diseases. The remarkable resilience of bats in the face of seemingly overwhelming viral infection has long sparked the interest of immunology researchers.

Natural clay found to kill deadly bacteria. A global effort is under way to find effective treatments for deadly hospital-acquired infections, with many such dangerous bacteria proving worryingly resistant to antibiotics. Tiny Quantum Dots May Spell Doom For Deadly Superbug Infections. How Thalidomide Went From Medical Disaster to Miraculous Cancer Treatment. Edge.org. In the hunt for new antibiotics, the genius of simplicity. The end of migraines is close: A new drug could stop debilitating headaches before they start. Nanomesh dressings may draw bacteria from chronic wounds. We've previously heard about wound dressings that kill bacteria, but now researchers at Australia's Swinburne University of Technology are taking a different approach.

New vaccine method could protect against all types of influenza. New study may provide a step towards a universal vaccine for all types of influenza. All Natural Sleep Aid by Sleep Shepherd. Mentally ill might spray away some of their troubles. Theconversation. Gates, Google Join $120 Million Funding for Genome Editing Firm. Scientists Target New Painkillers From Spider Venom. Anglo-Saxon antibiotics are just the start – it’s time to start bioprospecting in the past.

How A Tilt Toward Safety Stopped A Scientist's Virus Research. Xenon could provide protection for the brain after a blow to the head. Surgeons replace a 12-year-old's cancerous vertebra with a 3D-printed implant. Young blood to be used in ultimate rejuvenation trial - health - 20 August 2014. Epigenetic tie to neuropsychiatric disorders found. Discovery of a new means to erase pain. Canadian Soil Sample Delivers a New 'Weapon in the War on Superbugs' This Weird-Looking Headband Actually Relieves Migraine Pain.