NSA sued by Wikimedia, rights groups over mass surveillance. Wikipedia is suing the NSA for its mass surveillance program. NSA mass surveillance targeted in lawsuit by ACLU and Wikimedia. The American Civil Liberties Union said Tuesday it had filed a lawsuit on behalf of organizations including the Wikimedia Foundation and the conservative Rutherford Institute against the U.S. 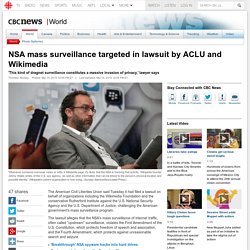 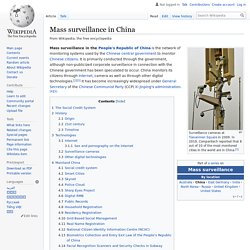 Current affairs[edit] In January 2014, the State Administration of Press, Publication, Radio, Film and Television announced that real names would be required of users who wished to upload videos to Chinese web sites. The agency explained that the requirement was meant to "prevent vulgar content, base art forms, exaggerated violence and sexual content in Internet video having a negative effect on society. "[1] Global surveillance. Global surveillance refers to the mass surveillance of entire populations across national borders.[1] Its roots can be traced back to the middle of the 20th century, when the UKUSA Agreement was jointly enacted by the United Kingdom and the United States, which later expanded to Canada, Australia, and New Zealand to create the Five Eyes alliance. 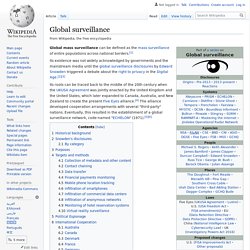 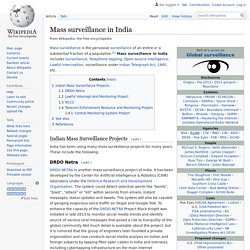 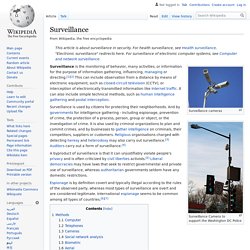 It is also used by criminal organisations to plan and commit crimes, such as robbery and kidnapping, by businesses to gather intelligence, and by private investigators. Surveillance can be viewed as a violation of privacy, and as such is often opposed by various civil liberties groups and activists.[7][8] Liberal democracies have laws which restrict domestic government and private use of surveillance, usually limiting it to circumstances where public safety is at risk. Authoritarian government seldom have any domestic restrictions, and international espionage is common among all types of countries. Mass surveillance industry. The mass surveillance industry is a multi-billion dollar economic sector that has experienced phenomenal growth rates since 2001. 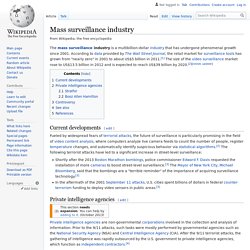 According to data provided by The Wall Street Journal, the retail market for surveillance tools has sprung up from "nearly zero" in 2001 to about US$5 billion in 2011.[1] The size of the video surveillance market rose to US$13.5 billion in 2012, and is expected to reach US$39 billion by 2020.[2] Current developments[edit] Fuelled by widespread fears of terrorist attacks, the future of surveillance is particularly promising in the field of video content analysis, where computers analyze live camera feeds to count the number of people, register temperature changes, and automatically identify suspicious behavior via statistical algorithms.[2] The following terrorist attacks have led to a significant increase in street-level surveillance: Shortly after the 2013 Boston Marathon bombings, police commissioner Edward F.

Private intelligence agencies[edit] Mass surveillance in the United Kingdom. The judicial body which oversees the intelligence services in the United Kingdom, the Investigatory Powers Tribunal, ruled in December 2014 that the legislative framework in the United Kingdom does not permit mass surveillance and that while GCHQ collects and analyses data in bulk, its practices do not constitute mass surveillance.[13][14][15] Other independent reports, including one by the Intelligence and Security Committee of Parliament, also came to this view although they found past shortcomings in oversight and disclosure, and said the legal framework should be simplified to improve transparency.[16][17][18] However, notable civil liberties groups and broadsheet newspapers continue to express strong views to the contrary,[19] while UK and US intelligence agencies[20][21] and others[22] have criticised these viewpoints in turn. 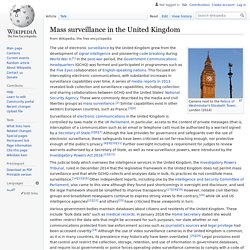 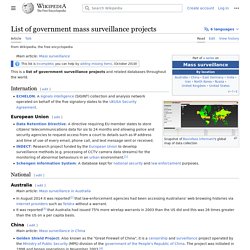 International[edit] ECHELON: A signals intelligence (SIGINT) collection and analysis network operated on behalf of the five signatory states to the UKUSA Security Agreement. European Union[edit] Data Retention Directive: A directive requiring EU member states to store citizens' telecommunications data for six to 24 months and allowing police and security agencies to request access from a court to details such as IP address and time of use of every email, phone call, and text message sent or received.INDECT: Research project funded by the European Union to develop surveillance methods (e.g. processing of CCTV camera data streams) for the monitoring of abnormal behaviours in an urban environment.[1]Schengen Information System: A database kept for national security and law enforcement purposes. List of government mass surveillance projects. Global surveillance disclosures (2013–present)

Barton Gellman, a Pulitzer Prize–winning journalist who led The Washington Post's coverage of Snowden's disclosures, summarized the leaks as follows: "Taken together, the revelations have brought to light a global surveillance system that cast off many of its historical restraints after the attacks of Sept. 11, 2001. 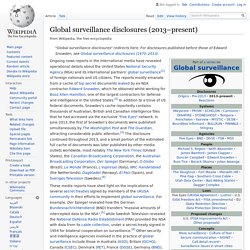 Secret legal authorities empowered the NSA to sweep in the telephone, Internet and location records of whole populations. " Although the exact size of Snowden's disclosure remains unknown, the following estimates have been put up by various government officials: Slide from a 2008 NSA presentation about XKeyscore, showing a worldmap with the locations of XKeyscore servers. Mass surveillance in the United States. The practice of mass surveillance in the United States dates back to World War I wartime monitoring and censorship of international communications from, to, or which passed through the United States. 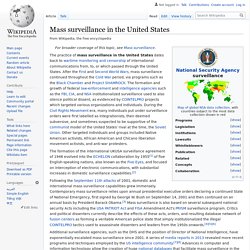 After the First World War and the Second World War, the surveillance continued, via programs such as the Black Chamber and Project SHAMROCK. The formation and growth of federal law-enforcement and intelligence agencies such as the FBI, CIA, and NSA institutionalized surveillance used to also silence political dissent, as evidenced by COINTELPRO projects which targeted various organizations and individuals. During the Civil Rights Movement era, many individuals put under surveillance orders were first labelled as integrationists then deemed subversive.

Other targeted individuals and groups included Native American activists, African American and Chicano liberation movement activists, and anti-war protesters. Mass surveillance. Mass surveillance is the intricate surveillance of an entire or a substantial fraction of a population.[1] The surveillance is often carried out by governments or governmental organisations, but may also be carried out by corporations, either on behalf of governments or at their own initiative. Depending on each nation's laws and judicial systems, the legality of and the permission required to engage in mass surveillance varies. Mass surveillance has often been cited as necessary to fight terrorism, to prevent social unrest, to protect national security, to fight child pornography and protect children. Conversely, mass surveillance has equally as often been criticized for violating privacy rights, limiting civil and political rights and freedoms, and being illegal under some legal or constitutional systems.

This isn’t just part of life in the 21st century, it’s illegal and a human rights violation. Watch the video > Amnesty International’s #UnfollowMe campaign calls on governments to ban mass surveillance and unlawful intelligence sharing. All countries should have strong legal safeguards to protect people against unlawful interception of their communications and their private lives. Every border you cross, every purchase you make, every call you dial, every cell phone tower you pass, friend you keep, article you write, site you visit… is in the hands of a system whose reach is unlimited but whose safeguards are not.' The Snowden revelations proved beyond a doubt that governments have systematically violated their citizens’ rights to privacy on a global scale, and in turn placed other rights at risk.

How Canada Can End Mass Surveillance. Third chapter in OpenMedia's crowd-sourced privacy plan. An OpenMedia survey found 93.8 per cent of Canadians want to end blanket surveillance of law-abiding people. Protest photo by Jeremy Board. Just two short years ago, if you asked strangers on the street about mass surveillance, you'd likely encounter many blank stares. Some would remember East Germany's Stasi spy agency, or reference China's extensive Internet censorship. But few would express fear that western democratic governments like the U.S., Britain, and Canada were engaged in the mass surveillance of law-abiding citizens. That all changed in June 2013 when Edward Snowden, a contractor at the U.S. To give just a few examples, we learned that CSE spied on law-abiding Canadians using the free Wi-Fi at Pearson airport, and monitored their movements for weeks afterward.

Even emails Canadians send to the government or their local MP are monitored -- up to 400,000 a day according to CBC News. Mass surveillance. Clandestine. Violations of the Reasonable Expectation of Privacy.