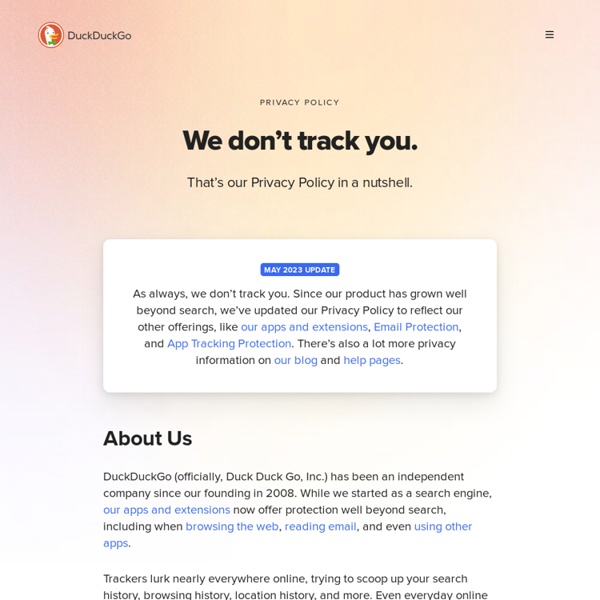 DuckDuckGo does not collect or share personal information. That is our privacy policy in a nutshell. The rest of this page tries to explain why you should care. Last updated on 04/11/12. Removed ", which gets sent to my personal email." in last paragraph as our feedback is now handled by multiple team members via desk.com. Before that, on 03/11/12. Why You Should Care Search Leakage [top] At other search engines, when you do a search and then click on a link, your search terms are sent to that site you clicked on (in the HTTP referrer header). For example, when you search for something private, you are sharing that private search not only with your search engine, but also with all the sites that you clicked on (for that search). In addition, when you visit any site, your computer automatically sends information about it to that site (including your User agent and IP address). DuckDuckGo prevents search leakage by default. You can enter ! Search History [top] Information Other Updates [top]

Radial tree Example of a radial tree, from a 1924 organization chart that emphasizes a central authority.[1] Radial vs. triangular tree layout Comparison to other layouts[edit] In a simple case, the first node is at the top, and the linked nodes are beneath. As each node typically has more than one child, the resulting shape is relatively triangular. In a radial layout, instead of each successive generation being displayed a row below, each generation is displayed in a new, outer orbit.

Best Sites For Good Free Stock Images - Blogging Sueblimely I have spent considerable time researching the best sites to find online free images/stock images, along with their copyright/ Creative Commons licences. Some of these sites will probably already be familiar to you but others new, as they were to me. I hope you find this of use, as it makes the time spent all worthwhile. Sites are listed in alphabetical order. Free Images Google PageRank - Algorithm The PageRank Algorithm The original PageRank algorithm was described by Lawrence Page and Sergey Brin in several publications. It is given by PR(A) = (1-d) + d (PR(T1)/C(T1) + ... + PR(Tn)/C(Tn))

Mind map A mind map about educational technology A mind map is a diagram used to visually organize information. A mind map is hierarchical and shows relationships among pieces of the whole.[1] It is often created around a single concept, drawn as an image in the center of a blank page, to which associated representations of ideas such as images, words and parts of words are added.

Untold Stories of the First World War Photos, letters and other memorabilia It was the war that tore Europe apart – a struggle between the central powers of Germany, Austria-Hungary, Turkey and Bulgaria, against the allied powers of Britain, France, Belgium, Russia, Italy and the USA. No European nation was left untouched – even neutral states felt the impact of the war. Webinator Web Index System: Thunderstone <hr/><h3><img src="/site/images/blueball.gif"> Overview</h3> The Webinator Web Index & Retrieval System is a highly customizable package that allows a Website administrator to easily create and deploy a high quality search interface to collections of web documents. With support for multiple collections, a single installation can serve searches for many websites, or different areas within a website, and a customizable thesaurus or synonym file allows users to find documents even if the terminology they use is different from that on the site.

Lateral diffusion Lateral diffusion is the process whereby information can be spread from one node in a social network to another, often in a selective way, and can rapidly traverse an entire population, but preferentially to those nodes likely to be interested, or needing to know. In this way it has been shown that typically no more than 6 intermediaries are likely to link the most extreme chain of lateral diffusion—see six degrees of separation even worldwide. Messages or information are also subject to query and modification en route. This is in contrast to central media where one message or perspective is broadcast to a large number of people simultaneously.

Digitised Manuscripts Almost 900 Greek manuscripts and some of the most important papyri, ranging in date from the first to the 18th centuries, are now included in the Digitised Manuscripts site. The first two phases of the Greek Manuscripts Digitisation Project were generously funded by the Stavros Niarchos Foundation and the third phase was funded by the Stavros Niarchos Foundation, the A. G. Sitemaps - My sites One account. All of Google. Sign in to continue to Google Search Console Find my account Forgot password? Sign in with a different account Create account