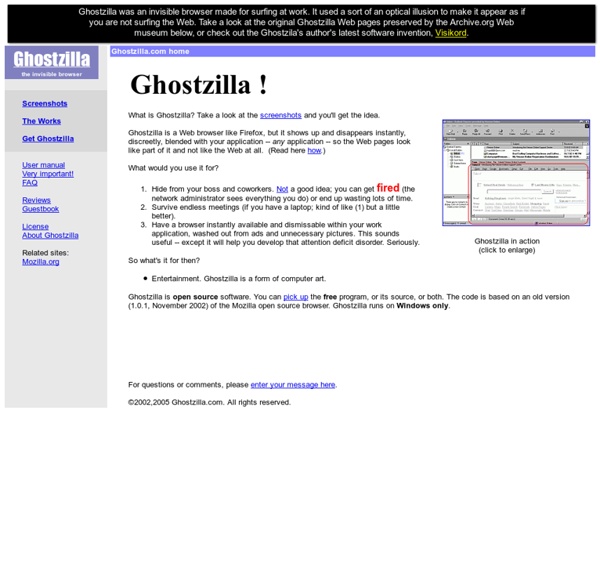 Alternate Web Browsers for Windows Most people around the world will agree that they started using internet through Internet Explorer, then shifted to Mozilla Firefox and have finally landed on Google Chrome today. Of course, there’ll be many who disagree. Browsers such as Opera have also been featured in many devices that we use including computers and some particular OS. While it is true that Chrome happens to be the most widely used browser, it is also true that there exist many other browsers which could prove to be better than Chrome. It all depends upon what work you have from the browser you are using. Google tracks you. We don't. An illustrated guide. DuckDuckGo does not collect or share personal information. That is our privacy policy in a nutshell. The rest of this page tries to explain why you should care. Last updated on 04/11/12. Removed ", which gets sent to my personal email." in last paragraph as our feedback is now handled by multiple team members via desk.com. Before that, on 03/11/12.

Three steps to properly protect your personal data With groups like Anonymous actively looking to embarrass your company, laptops thefts occurring every second, and the recent poor US District Court ruling on fifth amendment password protection rights, it is time you actually encrypt your data properly. Your Windows login password is not encrypting your computer (surprise!). Full-disk encryption (used by very few people) is a good step, but by itself it still will not completely protect your data from prying eyes, overzealous governments, or your own mistake of leaving your company's crown jewels at the local coffee shop. More in the Investigator's Toolkit: Instead—as with many successful security designs—you can set up a layered approach to protecting your data with encryption.

Comparison of browser synchronizers The following tables compare general and technical information for a number of web-based browser synchronizers . Please see the individual products' articles for further information. This article is not all-inclusive or necessarily up-to-date. Unless otherwise specified in footnotes, comparisons are based on the stable versions. Transmute is excluded because it is a Windows-based offline tool (which has privacy advantages). Find Your Own Private Internet With Freenet PC World – by Alex Wawro Anonymous peer-to-peer communication on the Internet isn’t just a handy tool for privacy enthusiasts; it’s critical for preserving free speech in the digital world. Anonymous file-sharing services like BitTorrent are legion, but their utility is limited—you can share only files—and their reputations are unfairly tarnished by people who use them to share media illegally. If you’re looking for a highly anonymous peer-to-peer network with websites, forums, and more, look no farther than the Free Network, one of the best-kept secrets in anonymous communication. Here’s how it works: Freenet is an anonymous peer-to-peer data-sharing network similar to BitTorrent, but with one key difference: All uploaded data is assigned a unique key, sliced up into small, encrypted chunks and scattered across different computers on the network.

Chromium (web browser) Chromium is the open source web browser project from which Google Chrome draws its source code.[3] The browsers share the majority of code and features, though there are some minor differences in features and they have different licensing. Chromium is the name given to the open source project and the browser source code released and maintained by the Chromium Project.[7] It is possible to download the source code and build it manually on many platforms. To create Chrome from Chromium, Google takes this source code and adds:[8] By default, Chromium only supports Vorbis, Theora and WebM codecs for the HTML5 audio and video tags.

'Uncrackable' codes set for step up 4 September 2013Last updated at 13:09 ET By Melissa Hogenboom Science reporter, BBC News Quantum cryptography is a way to share secret digital keys A system that allows electronic messages to be sent with complete secrecy could be on the verge of expanding beyond niche applications. A team of British scientists has discovered a way to build communications networks with quantum cryptography at a larger scale than ever before. Quantum cryptography has the potential to transform the way sensitive data is protected. Details appear in Nature journal. Lightweight Browsers Flashpeak.com The folks at FlashPeak.com have created two lightweight browsers in this category. Slimbrowser was developed as a lightweight high speed alternative for the Windows OS and uses the Trident engine. Slimboat is similar in appearance, but the core uses Webkit to offer versions in Windows, Linux and Mac OSx.

Still trust DuckDuckGo? In my recent blog post PRISM - Where do we go from here? I made the point that using services such as DuckDuckGo on the presumption that they are safe, is a dangerous thing to do and explained why. I have also been explaining to people on Twitter that using DuckDuckGo on the assumption that their searches will be private was a misunderstanding of who DuckDuckGo are and what they do and pointed them to the previously mentioned blog post. How (and Why) to Set Up a Secondary Browser Optimized for Slow Internet Connections SExpand I like how you say "use fewer extensions" followed by "use the speed dial extension" and "use the tabvault extension". Snarkiness aside, Opera has the option to start with the tabs from last session or not, and speeddial is built in. You don't need an extension for that. And I'm pretty sure you could make your own speeddial for Firefox, for instance by grabbing [myfav.es] and saving it to drive.