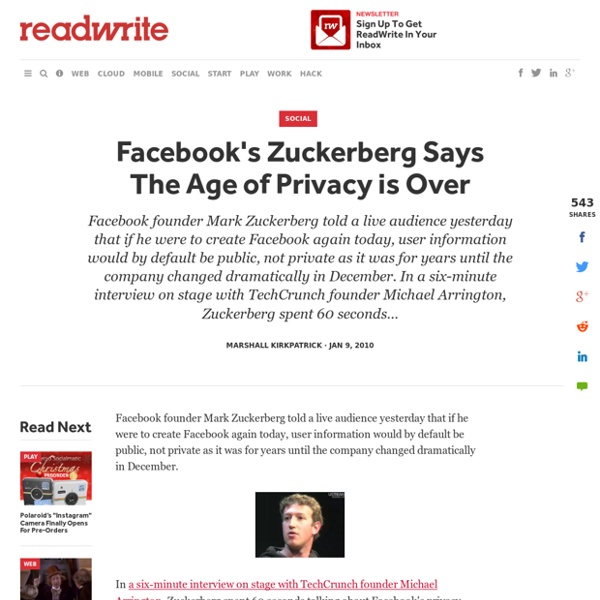 Facebook founder Mark Zuckerberg told a live audience yesterday that if he were to create Facebook again today, user information would by default be public, not private as it was for years until the company changed dramatically in December. In a six-minute interview on stage with TechCrunch founder Michael Arrington, Zuckerberg spent 60 seconds talking about Facebook's privacy policies. His statements were of major importance for the world's largest social network - and his arguments in favor of an about-face on privacy deserve close scrutiny. Zuckerberg offered roughly 8 sentences in response to Arrington's question about where privacy was going on Facebook and around the web. See also: Why Facebook is Wrong: Privacy is Still Important Zuckerberg: "When I got started in my dorm room at Harvard, the question a lot of people asked was 'why would I want to put any information on the Internet at all? That's Not a Believable Explanation Perhaps the new privacy controls will prove sufficient.

WhyFacebook is Wrong Privacy Still imp Facebook founder Mark Zuckerberg told a live audience this weekend that the world has changed, that it's become more public and less private, and that the controversial new default and permanent settings reflect how the site would work if he were to create it today. Not everyone agrees with his move and its justification. Has society become less private or is it Facebook that's pushing people in that direction? Is privacy online just an illusion anyway? Below are some thoughts, based primarily on the pro-privacy reactions to Zuckerberg's statements from many of our readers this weekend. Though there is a lot to be said for analysis of public data (more on that later), I believe that Facebook is making a big mistake by moving away from its origins based on privacy for user data. In Facebook's early days, and for the vast majority of the site's life, its primary differentiator was that your user data was only visible to other users that you approved friend requests from.

Google CEO On Privacy (VIDEO): &#039;If You Have Something You Don&#039;t Want Anyone To Know, Maybe You Shouldn&#039;t Be Doing It&#039; Yahoo, Verizon, Sprint, and others have recently come under fire for sharing customer data with the authorities, and admitting to "spying" abilities that would "shock" and "confuse" customers. A CNBC interview with Google CEO Eric Schmidt suggests the search giant Google shouldn't get off easy, and users should be wary of what Google knows about them -- and with whom they can share that information. CNBC's Mario Bartiromo asked CEO Schmidt in her December 3, 2009 interview: "People are treating Google like their most trusted friend. Should they?" Schmidt's reply hints that if there's scandalous information out there about you, it's your problem, not Google's. Schmidt tells Baritoromo: If you have something that you don't want anyone to know, maybe you shouldn't be doing it in the first place. But if you really need that kind of privacy, the reality is that search engines, including Google, do retain this information for some time. Silicon Alley Insider notes,

Conversations About The Internet #5: Anonymous Facebook Employee Facebook employees know better than most the value of privacy. This past summer Facebook relocated from University Avenue in Palo Alto, CA — where several buildings fan out along the downtown strip — to a new central office in Stanford Research Park. A good friend and two-year veteran of Facebook invited me to check out the new space. When I arrived, a security guard handed me a non-disclosure contract to fill out, a requirement to enter the building. “Just making sure you’re not a Twitter spy,” he said. The Rumpus: On your servers, do you save everything ever entered into Facebook at any time, whether or not it’s been deleted, untagged, and so forth? Facebook Employee: That is essentially correct at this moment. Rumpus: When you say “click on somebody’s profile,” you mean you save our viewing history? Employee: That’s right. Rumpus: In other words, the person you stalk the most. Employee: No, it’s more than just that. Rumpus: When did Facebook make this change? Employee: Exactly.

Classroom 2.0 Zuckerberg Opens His Facebook Page Wide Open. He Knows What He’s From the beginning of the week, Facebook began rolling out new privacy settings, which were meant to enable the user what information can be shown (to people who are not friends, or are friends of friends, or networks). They were also able to keep their old privacy settings. In a press release, Elliot Schrage, Vice President of Communications, Public Policy and Marketing said “Facebook is transforming the world’s ability to control its information online by empowering more than 350 million people to personalize the audience for each piece of content they share.” However, one blog noticed that rather than ‘control’ what information he was sharing, Zuckerberg has opened almost all of his profile to everyone, allowing us to see all his photos, some personal information and events he is planning on attending. “I can see his wall, his photo albums, and his events calendar. Here are Hill’s screenshots of his profile (just in case he changes his mind!)

Facebook&#039;s Privacy Erosion - Andrew Tech Help Facebook is the world's most popular social networking website and has attracted over 400 million active users in only 6 years. For quite a while it appeared to be a very safe place to put information to share with friends, without having to worry about the general public seeing it, unlike Myspace which has dropped it's members significantly since 2007. In the last 9 months though, the sugar coating has started to drop off and more and more people are leaving the service. When Facebook was first made fully public to people outside of universities, it was marketed as the safe place to share photos, videos, and other communications online with your friends and family. How Facebook's Privacy Has Eroded Over The Years In 2007, the erosion of privacy within the Facebook network started to occur. Between June and August 2009, Facebook updated it's Publisher and search facilities. While Facebook was moving towards more public "Twitter like" profiles, it hadn't yet, until now. Your Birthdate.

Facebook Looks to Extend Its Presence Now Facebook is intensifying its efforts to expand its empire beyond its Web site; the company wants to turn scores of sites across the Internet into satellites where users will be able to interact with their Facebook friends. Details of Facebook’s plans — which involve a variation on its “Share” button, already prevalent on many sites — are expected to be introduced by , the company’s chief executive, on Wednesday during its conference here for third-party developers. But even before Facebook makes its plans public, its aim to become a social networking force across the Web is facing competition. On Monday, a coalition of other companies, including some Facebook rivals like and , are banding together to establish a new standard for Web sites to allow visitors to share information, not just with Facebook but also with dozens of other social networking sites. The moves by Facebook and its rivals set up a battle for control over social interactions across the Internet.

Odysen, Hassle Free Collaboration Facebook Founder on Privacy: Public Is the New "Social Norm" Facebook founder Mark Zuckerberg claims that if Facebook was starting out now, sharing with everybody — rather than with a small group of friends — would be the starting point. Is this more about reflecting social norms or changing them to help Facebook compete with Twitter? The statement, made during a livestream of the Crunchies awards, hits on a hot button issue for Facebook: It recently notified users of privacy changes via a pop-up notification. Zuckerberg: Sharing is the "Social Norm" Zuckerberg's statement to interviewer Michael Arrington avoids any major "gotcha" quotes, subtly implying that Facebook's move is a reaction to societal changes but carefully avoiding any mention of Twitter's role in those changes. When I got started in my dorm room at Harvard, the question a lot of people asked was 'why would I want to put any information on the Internet at all? Change Was Inevitable My take: Zuck is right; the change was inevitable.

Announcing our new Family Safety Center Helping your children use the Internet safely is similar to teaching them to navigate the offline world. There are parts of the real world that you wouldn’t let your children explore unsupervised—and that goes for the online world as well. But while most of us remember being taught to cross the road and not talk to strangers, we probably weren’t taught how much personal information we should share online or how to handle cyberbullies. Therefore, it’s no surprise when parents and teachers tell us they want to learn more about how to help their kids use the Internet safely and responsibly. Today, we’re launching our new Family Safety Center; a one-stop shop about staying safe online. For day-to-day practical tips we asked some of our parents at Google to share their own ideas. The new Safety Center also provides information on the safety tools built into Google products.

Diaspora wants to be your private, decentralized, open source Facebook : This Magazine Blog // Canadian progressive politics, environment, art, culture // Subscribe today If you’re like me and you shudder to think of the store of personal information you’ve inadvertently let loose online, you’ll be happy to know that a few altruistic software programmers are on the case. Four NYU students recently decided they’d had enough of heavily centralized, corporate-minded social networking sites. They took on the task of developing a social network to prove that online sharing and privacy should go hand in hand. Let’s be friends! Here’s what the New York Times had to say about the team and its project: (They) intend to distribute the software free, and to make the code openly available so that other programmers can build on it. Though the creators of Diaspora have not come right out and slammed Facebook, they have credited a talk by Eben Moglen, a professor of law at Columbia University, as the inspiration behind the project. Mr. Will Diaspora dismantle what Mogden calls “a Panopticon built out of web parts”?

Facebook is not your friend | Andrew Brown | Comment is free | g There is a wonderful graphic on the New York Times site showing how Facebook's privacy statement has got larger and larger to cover the growing holes in its privacy policy. The mapping isn't perfect: if it were, the declaration of Facebook's dedication to privacy would have to be of almost infinite size, since the default amount of privacy Facebook now offers is practically zero. When the site first started, very few people could join, and nothing became public, even to them, without the users' express permission. Now everyone can join and everything is public to almost all of them unless you make a determined effort to hide it. This effort has to be renewed every six months or so when Facebook revises its privacy policy to make it more opaque and less effective. If you decide it isn't worth it, Facebook turns out to be very difficult to leave. It is difficult to overestimate how much a Facebook user tells the company about his or her life.