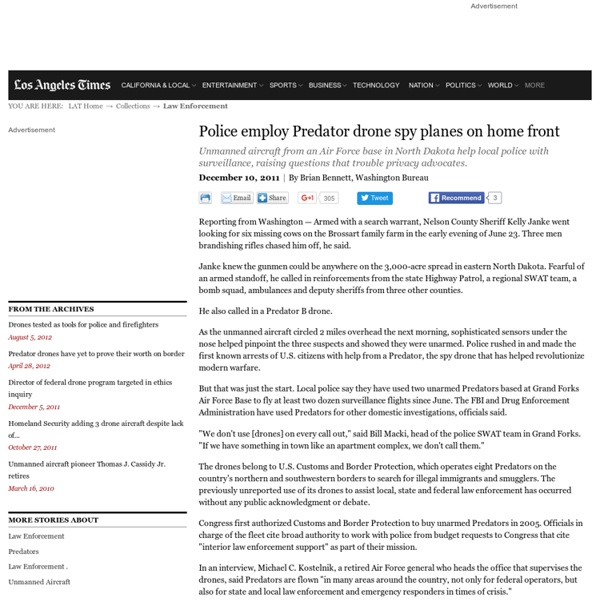 Reporting from Washington — Armed with a search warrant, Nelson County Sheriff Kelly Janke went looking for six missing cows on the Brossart family farm in the early evening of June 23. Three men brandishing rifles chased him off, he said. Janke knew the gunmen could be anywhere on the 3,000-acre spread in eastern North Dakota. Fearful of an armed standoff, he called in reinforcements from the state Highway Patrol, a regional SWAT team, a bomb squad, ambulances and deputy sheriffs from three other counties. He also called in a Predator B drone. As the unmanned aircraft circled 2 miles overhead the next morning, sophisticated sensors under the nose helped pinpoint the three suspects and showed they were unarmed. But that was just the start. "We don't use [drones] on every call out," said Bill Macki, head of the police SWAT team in Grand Forks. The drones belong to U.S. Congress first authorized Customs and Border Protection to buy unarmed Predators in 2005. In an interview, Michael C. Related:  POLICE

NSA Gadget Transfer Program Turning Local Cops into Spies By Activist Post With the media spotlight shining on police militarization, most Americans know something about the federal 1033 transfer program that enables police departments to get military equipment like armored vehicles, high power weapons, grenade launchers, and even bayonets. But most Americans don't realize that local law enforcement agencies can also acquire spy gear from the feds. The NSA transfers electronic gadgets to a variety of agencies including local law enforcement, and it is as simple as catalog shopping. This is yet another example of the tangled web of cooperation between state and local law enforcement, and the feds - a phenomenon quickly devolving America into one massive interconnected surveillance state. These transfer programs have largely gone unnoticed. The catalog contains the following mission statement. Some of this technology is specifically marketed to law enforcement: Here are just two examples of the technology your local cops can get their hands on.

Obama Signs Bill Creating “Amber Alert” System for Violence Against Police Officers By Carey Wedler On Tuesday, President Barack Obama signed a new bill intended to help keep better track of violent attacks against law enforcement. S.665 is also known as the Rafael Ramos and Wenjian Liu National Blue Alert Act of 2015, named for two NYPD officers killed late last year. It will set up infrastructure at the local, state, and federal level to keep meticulous track of acts committed against police. According to Congress’ website, the bill will create a Department of Justice-sponsored “Blue Alert” system, which mirrors the Amber Alert system created to locate abducted children. The bill defines “Blue Alert” as …information sent through the network relating to: (1) the serious injury or death of a law enforcement officer in the line of duty, (2) an officer who is missing in connection with the officer’s official duties, or (3) an imminent and credible threat that an individual intends to cause the serious injury or death of a law enforcement officer.

Why The Privatization Of America’s Police Is Such A Dangerous Trend By Claire Bernish Though a potent effort to silence dissent is underway in the US, directly doing so would be a flagrant breach of constitutional rights. And so the ostensible explanations for tactically-geared police at peaceful protests and insidious surveillance programs fall under nebulous terms like protecting public safety, keeping the peace or national security. But when Kinder Morgan wanted to push through construction of a controversial gas pipeline, it felt no need for such pretenses—and its justification for hiring off-duty police officers highlights disturbing implications of a dubious national trend: the privatization of American police. KMI spent more than $50,000 from June to October 2013 to employ uniformed, off-duty police in marked patrol units to “deter protests” in order to avoid “costly delays” for pipeline expansion in an environmentally sensitive area in Pennsylvania. As Mary Catherine Roper, deputy legal director of the ACLU in Philadelphia, said,

The U.S. Supreme Court Is Marching in Lockstep with the Police State The U.S. Supreme Court Is Marching in Lockstep with the Police State By John W. Whitehead June 23, 2014 “[I]f the individual is no longer to be sovereign, if the police can pick him up whenever they do not like the cut of his jib, if they can ‘seize’ and ‘search’ him in their discretion, we enter a new regime. The U.S. Whether it’s police officers breaking through people’s front doors and shooting them dead in their homes or strip searching innocent motorists on the side of the road, these instances of abuse are continually validated by a judicial system that kowtows to virtually every police demand, no matter how unjust, no matter how in opposition to the Constitution. These are the hallmarks of the emerging American police state: where police officers, no longer mere servants of the people entrusted with keeping the peace, are part of an elite ruling class dependent on keeping the masses corralled, under control, and treated like suspects and enemies rather than citizens.

Rising Enemy Within: Private Police Fits New World Order Script Bernie SuarezActivist Post First I want to say that many corporate (security) sympathizers tend to defend private policing, but this article will debunk all their arguments and show how private policing is the end-all end-game ultimate threat to freedom in America and humanity as a whole, all in the name of protecting corporate profits $ while working hand in hand with government for their greater long-term new world order plans. In 2014 I covered the rising threat of private security now arresting American citizens in the streets of America after witnessing firsthand the arrest of a gentleman in Hollywood, California. The private security company looked very threatening with guns, bulletproof vests and the whole tyranny outfit. The frightening scene looked more like a SWAT military situation with around 10-15 fully armed agents and multiple nearly unmarked cars, only there were no tanks or machine guns that I saw. Debunking the rationalization of private policing You Might Also Like

Cash Cops: How Civil Forfeiture Enriched U.S. Law Enforcement Devon Douglas-BowersActivist Post Civil forfeiture is a major issue that's recently gotten into the news, notably due to Attorney General Eric Holder's change to the controversial police action of seizing people's property. Unfortunately, Holder’s actions, while laudable, won't stop the massive damage that has already been done – and may very well continue the problem. To understand forfeiture, one must go back to colonial America. Originally, in rem jurisdiction was “incorporated into American customs and admiralty laws governing the seizure of ships for crimes of piracy, treason and smuggling in the early days of the Republic, and during the American Civil War." The situation changed, however, when President Nixon announced the War on Drugs and began to use civil forfeiture as an instrument of law enforcement. Under Nixon, the Continuing Criminal Enterprise statute was also enacted, targeting repeat offenders of lucrative drug trafficking. There have been attempts at reform.

Deli Customers Dragged into Chicago’s Secret Prison by Masked Police Cassius MethylActivist Post On September 29th 2011, a group of masked men burst into the Paseo Boricua Grocery & Deli in Chicago. Witnesses say they initially thought it was a robbery. John Vergara, an art teacher, who was taken to Homan Square in this incident said: At first I thought it was a robbery. The cops had machine guns, according to Jose Garcia, one of the other men dragged into Homan Square. …machine guns – I mean, I’m talking about rifles. They all had masks, all of them. So John Vergara and Jose Garcia were taken to Homan Square with the deli manager and 2 others; they were detained for about 9 hours. During their incarceration, police tried for hours to get them to falsely confess to crimes until one of the incarcerated men name-dropped a particularly good Chicago lawyer. Then they came back and all of a sudden they seemed scared. John Vergara added: I pretty much was kidnapped. I did not have any idea where I was. An original article from The Guardian about the incident said:

‘Black Site’ Discovered in Chicago, So Where Else Are American Police Disappearing People? Nick BernabeActivist Post The Chicago Police Department has been caught denying Americans due process; disappearing, torturing, and even killing people in an ominous building called Homan Square. Following a bombshell report published by The Guardian last Tuesday and subsequent reporting by independent media, Americans are up in arms over this facility. Activists using the hashtag #Gitmo2Chicago successfully trended across social media over the weekend, reaching millions of unknowing Americans who weren't aware of Homan Square because the mainstream media refuses to talk about it. However, fears are growing that Homan Square is not the only facility like this in the country. So where else are police using these facilities to disappear and torture people at? As we noted in an article last week, thanks to 2012-current language in the National Defense Authorization Act (NDAA), the federal government can now “legally” indefinitely detain Americans as long as they commit a “belligerent act.”