You Have Downloaded - We show what you downloaded 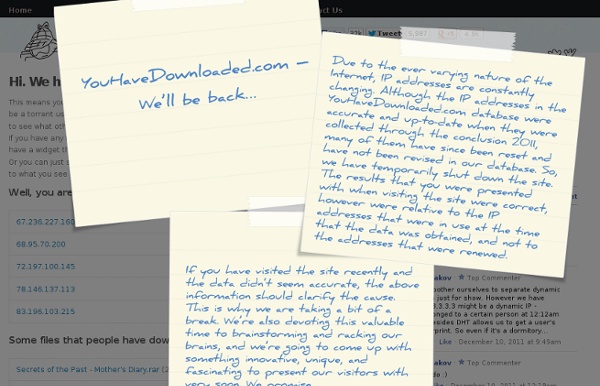 This means you are using a private torrent tracker or, of course, you may not be a torrent user at all! It happens. Please, entertain yourself. Feel free to see what other people have downloaded. The search box is on the top. If you have any friends who use torrents, use it to scare them off.

Track Who’s Tracking You With Mozilla Collusion LONG BEACH, Calif. — Mozilla CEO Gary Kovacs took the TED stage Tuesday morning to introduce Collusion, a Firefox browser add-on that lets you track who’s tracking you across the web for behavioral targeting purposes. Describing the medium as “an area of consumer protection that’s almost entirely naked,” Kovacs argued that the price we’re now being asked to pay for connectivenss is our privacy, and in turn, it’s “now time for us to watch the watchers.” Collusion looks to offer more transparency to users by creating a visualization of how your data is being spread to different companies as you navigate the web. Each time it detects data being sent to a behavioral tracker, it creates a red (advertisers), grey (websites) or blue dot on the visualization and shows the links between the sites you visit and the trackers they work with. Image Credit: James Duncan Davidson, TED

Hacking Facebook accounts on LAN – Part 2 « hackhaven Hey! Im back with the second part of the post. At the end of the last post, we successfully re-routed all the traffic from the victim’s computer to the router through our computer.Next, we have to capture their facebook cookies through wireshark. So How do you go about doing that? Create Something. Donate Login Remember Me Create An Account Forgot Password 53 New Digital Media Resources You May Have Missed With the holidays in full swing, that means the new year is just around the corner. Here at Mashable, we've been reflecting on the changes 2011 has brought for technology and social media and what those changes mean for the future. If you've been busy decking the halls and getting ready for the holidays, you might have missed a couple of our digital resources. Here is our gift to you — a weekly roundup of features. It's the gift that keeps on giving!

OK Glass, RIP Privacy: The Democratization Of Surveillance How’s this for synchronicity: Google Glass started shipping on the same week that CISPA passed the House, 3DRobotics unveiled their new site, and 4chan and Reddit pored over surveillance photos trying to crowdsource the identity of the Boston bombers. Cameras on phones. Cameras on drones. Cameras on glasses. Cameras atop stores, in ATMs, on the street, on lapels, up high in the sky. How to Build Your Own Wireless Home Network Welcome to Wireless Home Network Basics - the guide to setting up a basic Wireless LAN at home plus some security to keep it in place... This guide is meant for the intermediate computer user and therefore kept to a bare minimum in terms of complicated jargon/lingo; and is meant to be easily understood and straight to the point. Here is the table of contents: Introduction

Free Online Graph Paper Downloadable and very printable, I find these PDFs extremely useful. Graph Paper Quick Picks Now set to: 8 1/2 x 11 Paper. Language Log An important rallying cry and usage distinction made by allies of undocumented workers in the current cultural battle over immigration in the United States is Elie Wiesel's assertion above: "No human being is illegal." In the quote, Wiesel gives examples of the kinds of adjectives that he feels can denote properties of people (fat, skinny, beautiful, right, and wrong). On the other hand, calling a person 'illegal', he says, is a contradiction in terms. Here's a more elaborated statement of the idea, quoted from this website When one refers to an immigrant as an "illegal alien," they are using the term as a noun. They are effectively saying that the individual, as opposed to any actions that the individual has taken, is illegal.

Online Privacy FAQ Copyright © 2007 - 2014Privacy Rights Clearinghouse This FAQ is an addendum to our Fact Sheet 18 on Internet privacy.www.privacyrights.org/fs/fs18-cyb.htm It provides answers to questions that we are often asked by individuals who contact us concerning online privacy and safety. 1. I have found my name and personal information on the Internet at sites like ZabaSearch and Intelius. I am worried about identity theft. Wi-Fi Home Networking - Wireless LAN WLAN Technology Learn how to set up and maintain wireless home networks (or local area business networks) using standard "Wi-Fi" networking technology and products like wireless access points, routers, and adapters. How to Build a Wi-Fi Home Network TutorialThis in-depth article teaches you how to build a wireless home network (WLAN). Learn the terminology and technology basics, design a layout that meets your needs, choose the appropriate gear, then finally install and configure the pieces. Gallery of Home Networking DiagramsThis collection of home network diagrams covers both wireless, Ethernet and hybrid layouts. Network layouts including routers, access points, printers and entertainment consoles are described. Tips for Improving a Wireless Home NetworkOnce you have a basic Wi-Fi home network up and running, consider these ideas for improving its capability and performance.

Detexify LaTeX handwritten symbol recognition Want a Mac app? Lucky you. The Mac app is finally stable enough. See how it works on Vimeo. Download the latest version here. Download a Copy of The Pirate Bay, It’s Only 90 MB Soon The Pirate Bay will stop linking to .torrent files. Instead, the world's largest BitTorrent site will only list so-called magnet links. One of the advantages of the switch is that The Pirate Bay will be much more portable, and easier to copy. A new torrent listing all titles and magnet links on The Pirate Bay proves this point, as the public can download a copy that fits easily on a small USB stick - or even a few dozen floppies.

Apple, Facebook, others defy authorities, increasingly notify users of secret data demands after Snowden revelations Fueling the shift is the industry’s eagerness to distance itself from the government after last year’s disclosures about National Security Agency surveillance of online services. Apple, Microsoft, Facebook and Google all are updating their policies to expand routine notification of users about government data seizures, unless specifically gagged by a judge or other legal authority, officials at all four companies said. Yahoo announced similar changes in July. As this position becomes uniform across the industry, U.S. tech companies will ignore the instructions stamped on the fronts of subpoenas urging them not to alert subjects about data requests, industry lawyers say.

Create Your Own Smartphone App With Infinite Monkeys – No Coding Knowledge Required It would be great if we all had the time, skills, and patience to learn computer coding, especially since technology pervades so many areas of our life. But thankfully, there are applications and web developers out there who provide ways for the rest of us to produce apps with little or no coding skills. Back in June, I reviewed one such web application called Buzztouch, which is designed to allow anyone to create their own smartphone application.