FOODS 13/11/21 Determination of Multiple Mycotoxins and Their Natural Occurrence in Edible Vegetable Oils Using Liquid Chromatography–Tandem Mass Spectrometry. The prevalence of mycotoxins is often increased by the climatic conditions prevailing in tropical regions. 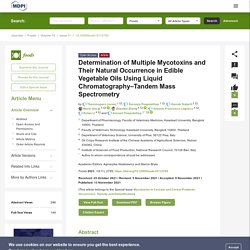 Reports have revealed the contamination of mycotoxins in some types of vegetable oil. However, vegetable oil is one of the essential ingredients used in food preparation. Thus, this study determined the occurrence of multi-mycotoxins in six types of vegetable oils commercially available in Thailand to assess the consumer health risk. ►▼ Show Figures Figure 1 This is an open access article distributed under the Creative Commons Attribution License which permits unrestricted use, distribution, and reproduction in any medium, provided the original work is properly cited The prevalence of mycotoxins is often increased by the climatic conditions prevailing in tropical regions. ►▼ Show Figures.

TOXINS 12/11/21 Mycobiota and Mycotoxin Contamination of Traditional and Industrial Dry-Fermented Sausage Kulen. The aim of this study was to identify and compare surface mycobiota of traditional and industrial Croatian dry-fermented sausage Kulen, especially toxicogenic species, and to detect contamination with mycotoxins recognized as the most important for meat products. 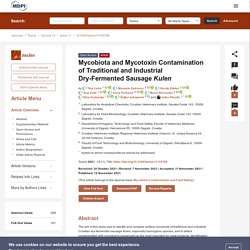 Identification of mould species was performed by sequence analysis of beta- tubulin and calmodulin gene, while the determination of mycotoxins aflatoxin B1 (AFB1), ochratoxin A (OTA), and cyclopiazonic acid (CPA) was carried out using the LC-MS/MS (liquid chromatography-tandem mass spectrometry) method. The results showed a significantly higher number of mould isolates and greater species (including of those mycotoxigenic) diversity in traditional Kulen samples in comparison with the industrial ones.

P. commune, as a potential CPA-producer, was the most represented in traditional Kulen (19.0%), followed by P. solitum (16.6%), which was the most represented in industrial Kulen samples (23.8%). BIOMIN - MARS 2021 - 2020 BIOMIN World Mycotoxin Survey Report. TOXINS 12/10/19 Simultaneous Determination of Twenty Mycotoxins in the Korean Soybean Paste Doenjang by LC-MS/MS with Immunoaffinity Cleanup. Doenjang, a Korean fermented soybean paste, is vulnerable to contamination by mycotoxins because it is directly exposed to environmental microbiota during fermentation. 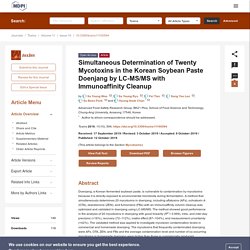 A method that simultaneously determines 20 mycotoxins in doenjang, including aflatoxins (AFs), ochratoxin A (OTA), zearalenone (ZEN), and fumonisins (FBs) with an immunoaffinity column cleanup was optimized and validated in doenjang using LC-MS/MS. The method showed good performance in the analysis of 20 mycotoxins in doenjang with good linearity (R2 > 0.999), intra- and inter-day precision (<16%), recovery (72–112%), matrix effect (87–104%), and measurement uncertainty (<42%). The validated method was applied to investigate mycotoxin contamination levels in commercial and homemade doenjang. ►▼ Show Figures. WORLD MYCOTOXIN JOURNAL - 2019 - Developments in mycotoxin analysis: an update for 2017-2018. 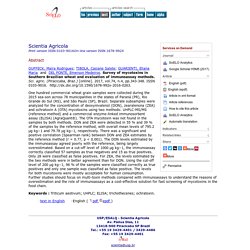 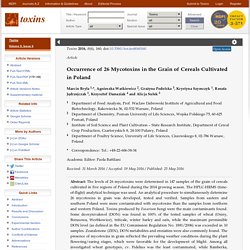 Weather Conditions/Wheat Genotype A total of 147 samples of cereals cultivated in five regions of Poland were analyzed (Figure 1). The samples included 99 samples of nine winter wheat cultivars (Astoria, Bamberka, Dacanto, Fidelius, Forkida, Kampana, Kepler, Meister, Oxal). Figure 1. Five regions of Poland in which samples for this study were cultivated. 1. The communes of Osiny, Borusowa and Werbkowice (situated relatively close to one another) are located in the southeastern part of Poland, with Żelisławki in the north and Wielichowo in the west. Figure 2. Figure 3. During the wheat flowering period, rainfall was lower in Żelisławki than in Osiny, Werbkowice and Borusowa by 11.2 mm, 7.9 and 6.1 mm, respectively. BIOMIN 18/03/15 MYCOTOXIN SURVEY 2014 - Surveying the Global Mycotoxin Threat [Infographic] BIOMIN 16/09/13 Rapport Mycotoxines BIOMIN 2012.

Comprehensive Reviews in Food Science and Food Safety - NOV 2013 - A Review on Mycotoxins in Food and Feed: Malaysia Case Study. Cereals and grains Rice is the main product and staple food in Malaysia. 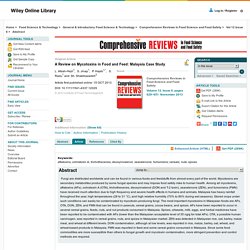 Corn, wheat, and barley are not staple food grains in this country and are totally imported from Argentina, China, Indonesia, and Thailand (Warr and others 2008). In a survey on stored paddies, rice and rice flour samples were contaminated with AFs (MARDI 1992). However, AF levels in the positive samples were lower than 4 ng/g. A. flavus was also isolated from some of the AF-negative samples. International Journal of Advanced Research (2014) MYCOTOXIN AND TOXIGENIC FUNGI OCCURRENCE IN EGYPTIAN MAIZE. Chem Cent J. 2013; 7: 99. The occurrence of mycotoxins in wheat from western Romania and histopathological impact as effect of feed intake. J Hum Ecol, 46(1): 21-31 (2014) Subsistence Farmers’ Mycotoxin Contamination Awareness in the SADC Region: Implications on Millennium Development Goal 1, 4 and 6. NORWEGIAN SCIENTIFIC COMMITTEE FOR FOOD SAFETY 09/04/13 Risk assessment of mycotoxins in cereal grain in Norway.

FSA - OCT 2013 - Food Survey Information Sheet 04/13 - Surveillance programme for mycotoxin in foods Year 3: mycotoxins in ethnic foods. FSA 01/08/14 Programme de recherche 2008-2015 - 4-year surveillance for mycotoxins – sampling and analysis. The sampling was the first part of an interdependent project which provided retail samples available to UK consumers comprising of a variety of foods to support the final year of a four year surveillance programme investigating the occurrence of mycotoxins in foods. 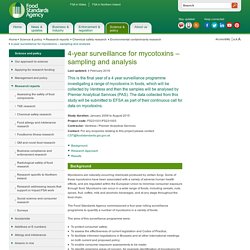 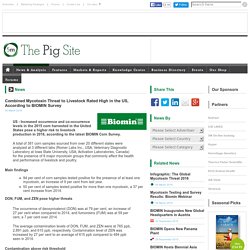 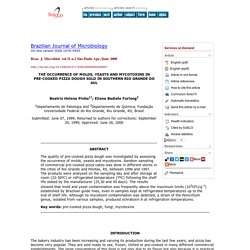 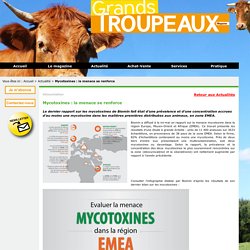 News 80 Per Cent of Livestock Producing Regions Face High Threats from Mycotoxins 25 March 2015 GLOBAL - Mycotoxin-related threats to livestock production are severe or high in 80 per cent of regions worldwide according to the latest BIOMIN Mycotoxin Survey. Those areas registered three or more major mycotoxins at concentration levels known to cause harm in animals. The survey results provide insights on the incidence of the six major mycotoxins in the agricultural commodities used for livestock feed.

Main findings Livestock production in North America and Southern Europe faces severe threat from mycotoxin contamination.South America, Asia, and the rest of Europe all face high threat from mycotoxins.Globally, deoxynivalenol poses the most frequent threat to livestock though levels of fumonisins and zearalenone also present a cause for concern. An Overview on Mycotoxin Contamination of Foods in Africa. WORLD POULTRY 30/05/13 Survey confirms extent of mycotoxin problem in feed. The 2012 drought in the US and the recent aflatoxin scandal in Europe has raised awareness once again of the mycotoxin problem facing the animal feed industry.

With more than 4,000 samples collected worldwide and almost 14,500 analyses conducted in the past year alone, Biomin has released its most complete and comprehensive mycotoxin report on the market to date. Since 2005, Biomin has been conducting extensive studies documenting the occurrence of mycotoxins worldwide. The Biomin Mycotoxin Survey Program 2012 details once again the distribution of mycotoxins according to their region of origin and commodity type. From January 2012 until December 2012, a total of 4,023 samples collected worldwide were analysed. EFSA 07/11/14 Interview with Dr. Bruce Cottrill, Member of the CONTAM Panel (mycotoxines) REVUE DE L ALIMENTATION ANIMALE 26/07/13 Mycotoxines : le rapport Biomin révèle la réalité du risque. JUNDISHAPUR JOURNAL OF MICROBIOLOGY - 2013 - Mycoflora of Fungal Contamination in Wheat Storage (Silos) in Golestan Province, No.

Ciudad Universitaria, C1428EHA, Buenos Aires - 2013 - Mycoflora and Mycotoxins Contamination of Soybean RR Harvested In the Pamp. African Journal of Agricultural Research 22/08/13 A survey of South African silage for fungi and mycotoxins. Toxins, Vol. 5, 2013 Estimated Dietary Exposure to Mycotoxins after Taking into Account the Cooking of Staple Foods in Japan. Abstract: Mycotoxins are commonly present in cereal grains and are not completely destroyed during their cooking and processing. When mycotoxins contaminate staple foods, the risk for exposure becomes serious. In East Asia, including Japan, rice is consumed as a staple food, and with the increasingly Westernized lifestyle, the consumption of wheat has increased. The mycotoxins commonly associated with rice and wheat are total aflatoxin (AFL) and ochratoxin A (OTA), respectively.

The content of mycotoxins in the analysed samples was assayed using the extraction method combined with HPLC-MS/MS analysis.