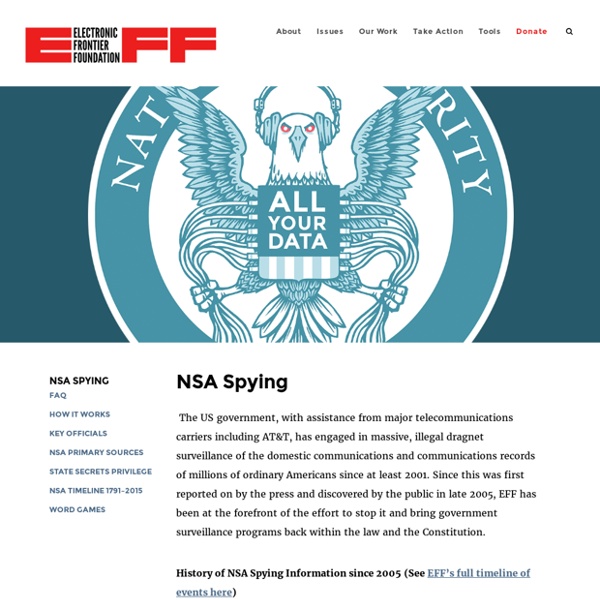 The US government, with assistance from major telecommunications carriers including AT&T, has engaged in massive, illegal dragnet surveillance of the domestic communications and communications records of millions of ordinary Americans since at least 2001. Since this was first reported on by the press and discovered by the public in late 2005, EFF has been at the forefront of the effort to stop it and bring government surveillance programs back within the law and the Constitution. History of NSA Spying Information since 2005 (See EFF’s full timeline of events here) News reports in December 2005 first revealed that the National Security Agency (NSA) has been intercepting Americans’ phone calls and Internet communications. Those news reports, combined with a USA Today story in May 2006 and the statements of several members of Congress, revealed that the NSA is also receiving wholesale copies of American's telephone and other communications records. EFF Fights Back in the Courts Jewel v.

Crimes Against Humanity Having been conditioned your entire lives, the way we are all conditioned our entire lives, to receive sound-bite answers to questions we have never had the critical ability to form in our minds, forecloses our ability to interrogate reality and draw conclusions from it. That is the function of the media. That is the function of the educational system you understand. It's not to teach you to think critically, which is educational in value. It's to teach you what to think. That's a rather different thing, to be indoctrinated than to be educated. We've got an ignorant leadership. At Nuremberg it was said that there was a complicity on the part of the German citizenry. [You] do what's necessary. You are not going to morally persuade a criminal state structure, bent upon perpetrating genocide, war crimes, and crimes against humanity, to do the right thing.

U.S. Spy Agency Reports Improper Surveillance of Americans - Bloomberg Business (Bloomberg) -- The National Security Agency today released reports on intelligence collection that may have violated the law or U.S. policy over more than a decade, including unauthorized surveillance of Americans’ overseas communications. The NSA, responding to a Freedom of Information Act lawsuit from the American Civil Liberties Union, released a series of required quarterly and annual reports to the President’s Intelligence Oversight Board that cover the period from the fourth quarter of 2001 to the second quarter of 2013. The heavily-redacted reports include examples of data on Americans being e-mailed to unauthorized recipients, stored in unsecured computers and retained after it was supposed to be destroyed, according to the documents. They were posted on the NSA’s website at around 1:30 p.m. on Christmas Eve. Other unauthorized cases were a matter of human error, not intentional misconduct. Unauthorized Surveillance No New Legislation No Oversight Masking Identities Report Violations

WikiLeaks statement on the mass recording of Afghan telephone calls by the NSA (on 2014-05-23) The National Security Agency has been recording and storing nearly all the domestic (and international) phone calls from two or more target countries as of 2013. Both the Washington Post and The Intercept (based in the US and published by eBay chairman Pierre Omidyar) have censored the name of one of the victim states, which the latter publication refers to as country "X". Both the Washington Post and The Intercept stated that they had censored the name of the victim country at the request of the US government. We know from previous reporting that the National Security Agency’s mass interception system is a key component in the United States’ drone targeting program. Although, for reasons of source protection we cannot disclose how, WikiLeaks has confirmed that the identity of victim state is Afghanistan. We do not believe it is the place of media to "aid and abet" a state in escaping detection and prosecution for a serious crime against a population. Send to Friend Print