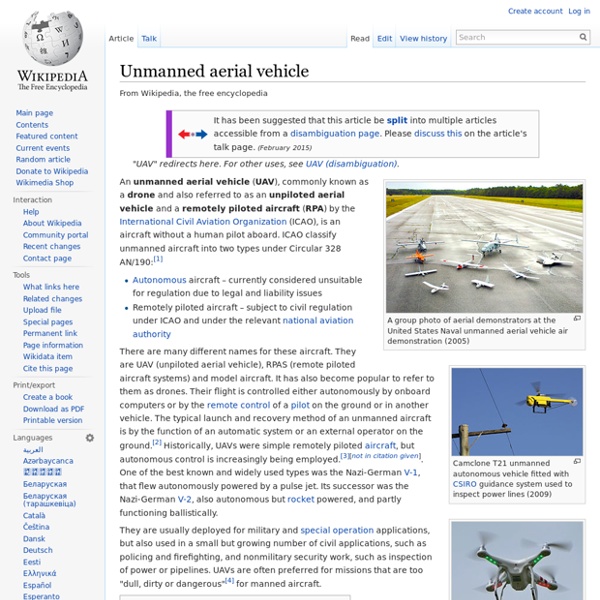 A group photo of aerial demonstrators at the 2005 Naval Unmanned Aerial Vehicle Air Demo. An unmanned aerial vehicle (UAV), commonly known as drone, is an aircraft without a human pilot aboard. Its flight is controlled either autonomously by onboard computers or by the remote control of a pilot on the ground or in another vehicle. The typical launch and recovery method of an unmanned aircraft is by the function of an automatic system or an external operator on the ground.[1] Historically, UAVs were simple remotely piloted aircraft, but autonomous control is increasingly being employed.[2][not in citation given] They are usually deployed for military and special operation applications, but also used in a small but growing number of civil applications, such as policing and firefighting, and nonmilitary security work, such as surveillance of pipelines. History[edit] The birth of U.S. FAA designation [edit] In the United States, shortly after,[when?] Classification[edit] U.S.

State Police Increasingly Turn to Drones to Monitor U.S. Citizens Drones quickly became the United States’ worst kept secret in 2011. From killing Anwar al-Awlaki to crashing in Iran, the use of drones has gotten more attention this past year than ever before. The use of drones in the U.S. itself, however, has received considerably less coverage. This year will prove to be a coming out party for the domestic drone. If used responsibly while remaining fully aware of potential dangers, drones could revolutionize law enforcement in the United States. In June 2011, a sheriff in North Dakota was searching for six missing cows that were stolen. According to the Los Angeles Times, this was the first known arrest of U.S. citizens using Predator drones on our soil. Drones will take significant danger away from law enforcement officials who put their lives at risk every day. This demand will likely lead the Federal Aviation Administration to review requests for unmanned vehicles for law enforcement purposes in 2012. Photo Credit: drsmith7383 Therese Postel

Fourth Amendment to the United States Constitution Because the Bill of Rights did not initially apply to the states, and federal criminal investigations were less common in the first century of the nation's history, there is little significant case law for the Fourth Amendment before the 20th century. The amendment was held to apply to the states in Mapp v. Ohio (1961). Under the Fourth Amendment, search and seizure (including arrest) should be limited in scope according to specific information supplied to the issuing court, usually by a law enforcement officer who has sworn by it. Fourth Amendment case law deals with three central questions: what government activities constitute "search" and "seizure"; what constitutes probable cause for these actions; and how violations of Fourth Amendment rights should be addressed. The exclusionary rule is one way the amendment is enforced. Text[edit] Background[edit] English law[edit] Like many other areas of American law, the Fourth Amendment finds its roots in English legal doctrine. Search[edit]

Border patrol drones can detect armed subjects and intercept wireless signals, documents show The Department of Homeland Security's border patrol drones are outfitted to distinguish armed subjects from unarmed ones and to potentially intercept communications signals. Earlier this week, the Electronic Privacy Information Center received a redacted document from the Bureau of Customs and Border Protection through the Freedom of Information Act, showing the performance specifications of Predator drones that are used to patrol the US border. Later, CNET found an unredacted copy. Besides the visual surveillance system, border patrol drones also incorporate interception of wireless signals. "Any potential deployment... would be implemented in full consideration of civil rights."

Drones assist county sheriffs’ search and rescue missions Unmanned aircraft have garnered most of their news coverage for their role in targeting terrorists overseas, but domestically they serve many of the same functions as their military counterparts. Although most are no bigger than a radio-controlled plane, unmanned aircraft — or drones — are regulated by the Federal Aviation Administration, which has given clearance for four counties’ sheriff’s offices to use them. Mesa County, Colo. has been a leader in using drones for search and rescue operations. Ben Miller coordinates the program. “We don’t need them to blow people up, but the rest of the stuff they could do opens up a lot of options,” he said. “It allows us to get that aerial view for a reasonable price. What started as a throwaway line at the water cooler about how cool it would be to have an unmanned aircraft became a years-long process for Miller to bring drones to Mesa County, which came to fruition in 2010. Polk County, Fla. toyed with using drones, but decided against it.

5 ways drones will be part of Utahns' lives SALT LAKE CITY — It seems that unmanned aerial vehicles — more often called drones — are everywhere these days. The U.S. makes use of drones extensively in its overseas operations for both surveillance and attack. On Tuesday, it was revealed that the U.S. makes use of drones flying out of a secret base in Saudi Arabia, though whether the base was really that much of a secret is a bit of a dispute. The Pentagon, C.I.A. and Joint Special Operations Command all operate independent drone programs. Police agencies nationwide have been seeking the use of UAVs, including here in Utah. On Tuesday, several states moved to curtail police access to drones and Florida voted to restrict access to emergency situations or terrorism cases. Since they have come into military use, drones have begun to make their way into other aspects of our lives, right here in the state. Dugway Proving ground dedicated a facility for testing and flying drones back in 2009. David Self Newlin, ksl.com Content Manager

U.S. opening up airspace to use of drones - Technology & science - Science - DiscoveryNews.com After more than 40 years of development and extensive use by the military, the United States has set the date when the nation’s airspace will be open for drones. Should you be scared? Short answer: No, but like any new technology, unmanned aerial vehicles have their dark side. Legislation passed by Congress last week gives the Federal Aviation Administration until Sept. 30, 2015, to open the nation’s skies to drones. NEWS: Smart Drone Aircraft Makes Debut Flight The first step comes in 90 days when police, firefighters and other civilian first-response agencies can start flying UAVs weighing no more than 4.4 pounds, provided they meet still-to-be-determined requirements, such as having an operator on the ground within line-of-sight of the drone and flying it at least 400 feet above ground. Currently, UAVs can only fly in restricted airspace zones controlled by the U.S. military. The deadline for full integration of drones into U.S. airspace is Sept. 30, 2015. NEWS: Drones Play ‘Where’s Waldo’

Domestic Drones U.S. law enforcement is greatly expanding its use of domestic drones for surveillance. Routine aerial surveillance would profoundly change the character of public life in America. Rules must be put in place to ensure that we can enjoy the benefits of this new technology without bringing us closer to a “surveillance society” in which our every move is monitored, tracked, recorded, and scrutinized by the government. Numerous states are considering (and some have passed) legislation regulating the use of drones. USAGE LIMITS: Drones should be deployed by law enforcement only with a warrant, in an emergency, or when there are specific and articulable grounds to believe that the drone will collect evidence relating to a specific criminal act. DATA RETENTION: Images should be retained only when there is reasonable suspicion that they contain evidence of a crime or are relevant to an ongoing investigation or trial.