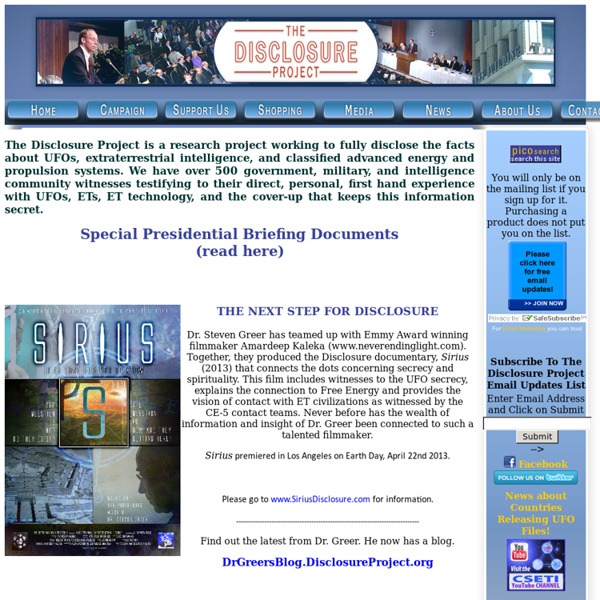 On Wednesday, May 9th, 2001, over twenty military, intelligence, government, corporate and scientific witnesses came forward at the National Press Club in Washington, DC to establish the reality of UFOs or extraterrestrial vehicles, extraterrestrial life forms, and resulting advanced energy and propulsion technologies. The weight of this first-hand testimony, along with supporting government documentation and other evidence, will establish without any doubt the reality of these phenomena. Learn more » Watch the May 9, 2001 Press Conference Watch the 2 Hour Witness Interview DVD Watch the 4 Hour Witness Interview DVD Part 1

Watch: Astonishing Footage Of UFO Breaking Up Chemtrail Bio-True Selenium Limited Advanced Release Never synthetic, Infowars Life Bio-True Selenium is extracted from 100% certified organic mustard seed, functions as a powerful antioxidant and supports a healthy thyroid and immune system. “We Are Living In The Most Important Time In The History Of The Universe” Dolores Cannon Discusses Our Current Paradigm Dolores Cannon has over 40 years of regressive hypnotherapy experience from which she’s acquired remarkable information about life in the Universe. Dolores Cannon’s career has spanned over 4 decades, during which time she has worked with thousands of clients in regressive hypnotherapy sessions. With over 17 published books on the subject, Dolores Cannon can easily be considered one of the world’s most sought after professionals in the field. Popular subject matter touched upon in her numerous books includes: past lives, extra-terrestrials, life on other planets, energy healing, famous historic figures such as Nostradamus and Jesus, abductions, and more.

Jake Simpson _____________________________ On return to Europe from the 2008 NEXUS Conference in Australia, flying out of Sydney, we stopped off in Thailand to visit a close friend who lives on the island of Koh Samui. Samui is well known as a travelers' international crossroads, and is also a place where a number of expats of all nationalities have settled.There we had the good fortune to meet Jake Simpson [an agreed pseudonym]. We spent several days with him and got to know him, and his family, very well. His story, which we heard in great detail, was one of the most important and interesting we have ever heard.None of the many long conversations we had were recorded, and we hope to capture an audio interview with Jake soon. The following concise summary was compiled upon return to the US, and has been checked for accuracy by Jake himself.For reasons which will become obvious, we were at first quite unsure whether to release this at all.

Anonymous takes down hundreds of ISIS social media accounts February 10th, 2015 at 9:07 am - AuthorJon Martindale The hacktivist movement Anonymous has made good on its promises to target those associated with the violent extremist organisation, ISIS, by taking over and knocking out hundreds of websites and social media accounts that help promote the organisation and encourage recruitment from new members. Apparently though, this is just the start, with the Anons stating in a video that #OpISIS would continue. It also championed the notion of solidarity in the face of the middle-east terrorist organisation’s brutality. “We are Muslims, Christians, Jews. Reptilian Revelations Out of Africa – New Dawn South Africa-based Zulu shaman Credo Mutwa confirms the story of reptilian-extraterrestrials in Africa, another hidden chapter of the lost history of Planet Earth. Having traveled throughout the world, Credo Mutwa, says that the “legends” of the interactions of humans and reptilians are common knowledge in Australia among the Aborigines, the cultures of Japan and Taiwan, as well as indigenous Native American people like the Mayans, Sioux, Cree, and many others. The Hopis’ Kachina, for example, reflects their understanding of the extraterrestrials’ presence on earth. Now it seems that only so-called Western civilisation authorities officially deny the existence of these creatures. In an interview with Rick Martin, Credo Mutwa explains the manipulation of life on earth by these negative entities, “Our people believe that we, the people of this Earth, are not masters of our own lives, although we are made to think that we are.” © New Dawn Magazine and the respective author.

10 Questions About The Pineal Gland That Add To The Mystery Of Spirituality by Buck Rogers The pine cone shaped, pea-sized pineal gland, located in the center of the human brain, is an organ of tremendous interest these days. To many spiritual seekers it is the ‘seat of the soul‘ and the ‘third eye,’ the anatomical part of the human body that acts as our spiritual antennae, connecting us to the non-physical, spiritual planes of existence. However, to many scientists and rigid materialist thinkers, it is strictly an endocrine gland responsible for the secretion of the hormone melatonin, a substance which, among other things, aids in the regulation of our circadian rhythms.

Serpo.org - The Zeta Reticuli Exchange Program (Release 16) Posting Sixteen by Anonymous (9 March, 2006) [Note by BR: This posting was received by myself while at the Laughlin UFO Congress, Nevada. There are two parts: 1) A sample of the Eben written language (original on left; sample enlargement on right; click on either for a higher-resolution image); 21 GIFs That Explain Mathematical Concepts “Let's face it; by and large math is not easy, but that's what makes it so rewarding when you conquer a problem, and reach new heights of understanding.” Danica McKellar As we usher in the start of a new school year, it’s time to hit the ground running in your classes! Math can be pretty tough, but since it is the language in which scientists interpret the Universe, there’s really no getting around learning it. Check out these gifs that will help you visualize some tricky aspects of math, so you can dominate your exams this year.

Well I guess it is not a big deal like the the US gov thought. There is only about 40% of people even believe that other world people visit here. Of those even fewer have ever been visited or seen a other world craft. Unless they take a person for a trip I don't think it makes much of an impression. Brazil is the one of the few government that have acknowledged their existance. by timepeaces Jun 8

I am mostly amazed at the vast NON interest in this. For me, it was huge; while most people seemed to say, "Yeah whatever, Kohls is having a sale today..." by hippiegal Jun 7

An essential 101 to anyone wondering if we're alone. The implimations are vast, by hapkido690 Jun 7