Edgar Cayce on astrology. By Kevin Williams Reality is multi-dimensional. 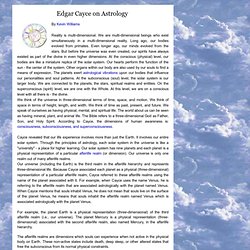 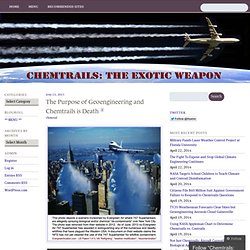 Activist Post – Special Report Urgent Alert: Throughout May of 2013, Southern California, home of 22 million people, received by far the most powerful daily aerosol attacks this writer has ever seen since learning of the Geoengineering issue in 2007. The sky remains whited-out and mountains ten miles away are barely visible due to toxic chemtrail fallout. Humanity, as motivated individuals of conscience, must unite and take immediate action to save lives and nature. 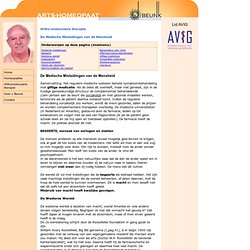 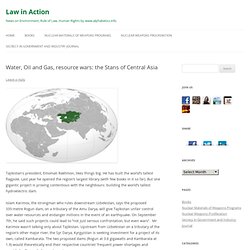 He has built the world’s tallest flagpole. Last year he opened the region’s largest library (with few books in it so far). But one gigantic project is proving contentious with the neighbours: building the world’s tallest hydroelectric dam. Islam Karimov, the strongman who rules downstream Uzbekistan, says the proposed 335-metre Rogun dam, on a tributary of the Amu Darya, will give Tajikistan unfair control over water resources and endanger millions in the event of an earthquake. On September 7th, he said such projects could lead to “not just serious confrontation, but even wars”.

Both were conceived in the twilight of the communist era and stalled when subsidies from Moscow evaporated at independence. Spurring on both projects is Uzbekistan’s bad behaviour, egregious even in a tetchy region. Though it seems unlikely Mr Karimov will drive his tanks over the border just yet, shoot-outs on the disputed borders are not uncommon. Conspiracy Theories, UFOs, Paranormal, Political Madness, and other "Alternative Topics". Magic the Gathering.

Cozywarm. Unclaimed Money Search - Find Unclaimed Property and Lost Money. An unclaimed asset becomes abandoned in the eyes of the law when an owner or heir fails to communicate an interest in it over a period of years, known as the dormancy period. 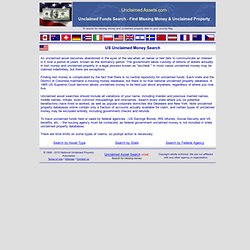 The government takes custody of billions of dollars annually in lost money and unclaimed property in a legal process known as "escheat. " In most cases unclaimed money may be claimed indefinitely, but there are exceptions. Finding lost money is complicated by the fact that there is no central repository for unclaimed funds. Each state and the District of Columbia maintains a missing money database, but there is no true national unclaimed property database. A 1965 US Supreme Court decision allows unclaimed money to be held just about anywhere, regardless of where you now live. Smallpox and Pseudomedicine. A good case of smallpox may rid the system of more scrofulous, tubercular, syphilitic and other poisons than could otherwise be eliminated in a lifetime. 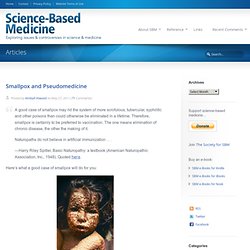 Therefore, smallpox is certainly to be preferred to vaccination. The one means elimination of chronic disease, the other the making of it.Naturopaths do not believe in artificial immunization . . . —Harry Riley Spitler, Basic Naturopathy: a textbook (American Naturopathic Association, Inc., 1948). Quoted here. Incredible Inventions (18) suppressed by Corporations, Government or Medical Associations. INVENTIONS EVER! 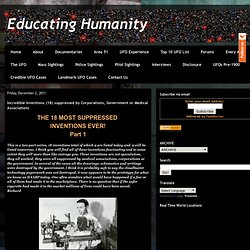 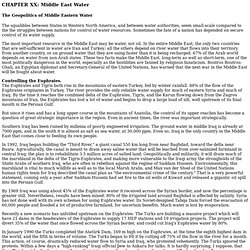 The Wealth Management Industry in the Middle East: Boon or Bust? Introduction Saudi Prince al-Waleed bin Talal al-Saud has a net worth of $20 billion. 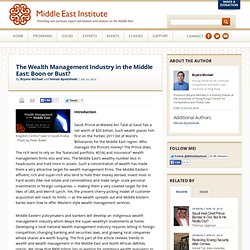 Such wealth places him first on the Forbes’ 2011 list of World's Billionaires for the Middle East region. Who manages the Prince’s money? The Prince does. The rich tend to rely on the “balanced portfolio, 401(k) and insurance” wealth management firms less and less. Middle Eastern policymakers and bankers will develop an indigenous wealth management industry which keeps the super-wealthy’s investments at home. The Wealth Management Industry in Perspective. HISTORY OF THE NEW WORLD ORDER by D. A. Rivera - Contents, Preface & Intro. Chapter One: The Illuminati, the House of Rothschild, Freemasonry, The Illuminati Grows, The German Union, The French Revolution, The Illuminati Spreads to America, Phi-Beta-Kappa, Skull and Bones, Congress of Vienna, the Masons Separate Themselves From the Illuminati, the Illuminati in the United States, Weishaupt Dies. 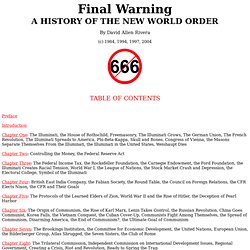 Fall of president suharto, imf, fall of rupiah. [www.witts.ws] Self-Running 40kW (40,000 Watt) Fuelless Generator (2 of 3) Gene Can Predict Likely Time Of Death - Scientists - Science/Technology. Genetic "switches" determine much about our bodies, including hair color, blood type, and susceptibility to certain diseases. Now, researchers believe they have found a gene that regulates something far more eerie: the time of day a person is likely to die. In an study published in the November 2012 issue of the Annals of Neurology scientists studying the body's biological clock (a.k.a. the circadian rhythm) report the discovery of gene variant that not only determines the likelihood of your being a morning person, but also predicts, with unsettling accuracy, your likely time of death.

The gene typically allows for three possible combinations of nucleotides (the four molecular building blocks of DNA): adenine-adenine (A-A), adenine-guanine (A-G), and guanine-guanine (G-G), according to a written statement released by Harvard Medical School. "This particular genotype affects the sleep-wake pattern of virtually everyone walking around," Dr. StAR - Stolen Asset Recovery Initiative - The Puppet Masters: How the Corrupt Use Legal Structures to Hide Stolen Assets and What to Do About It. Billions in corrupt assets, complex money trails, shell companies and other spurious legal structures.

These form the complex web of subterfuge in corruption cases, behind which hides the Puppet Master and beneficiary of it all. Linking the beneficial owner to the proceeds of corruption is difficult. With sizable wealth and resources, the corrupt stay ahead of the game by exploiting transnational constructions that are hard to penetrate. Indeed, nearly all cases of grand corruption have one thing in common. They rely on corporate vehicles- legal structures such as companies, foundations and trusts - to conceal ownership and control of tainted assets. The Puppet Masters takes corporate vehicles as its angle of investigation. History of PSYOP. Psychological Operations or PSYOP are planned operations to convey selected information and indicators to audiences to influence their emotions, motives, objective reasoning, and ultimately the behavior of organizations, groups, and individuals.

Used in all aspects of war, it is a weapon whose effectiveness is limited only by the ingenuity of the commander using it. A proven winner in combat and peacetime, PSYOP is one of the oldest weapons in the arsenal of man. It is an important force protector/combat multiplier and a non-lethal weapons system. Alien-Like Skulls Unearthed In Mexico. December 27, 2012 Image Caption: 300 Meters from the village of Onavas, archaeologists discovered a site with 25 human burials, 13 of whom have cranial deformation. This image shows cranial deformation in one of the human skulls. Credit: Cristina Garcia / INAH [Watch Video: Alien-Like Skulls Unearthed In Mexican Cemetery] Lee Rannals for redOrbit.com — Your Universe Online Archeologists have unearthed what looks like a cone-shaped alien skull from 1,000 years ago in Mexico.

The skull, which dates from 945 A.D. to 1308 A.D., was discovered accidentally while digging an irrigation system in the northwest state of Sonora in Mexico. Phys.org - Science News, Technology, Physics, Nanotechnology, Space Science, Earth Science, Medicine.

Aids. Egypt. Dutch. Conspiracy Archives. "conspiracy" / hokey but still interesting. This Chart Shows The Bilderberg Group's Connection To Everything In The World. Bazzio101. Mind Control. Philipduguay. Wars , the making of. Nuclear waste: the 270-tonne legacy that won’t go away. Rebecca Harms was 18 when she started campaigning for solutions to nuclear waste-storage in Germany. The Green Party MEP is now nearing her 56th birthday, but the country isn’t any closer to burying its radioactive waste. Last year – after decades of on-off drilling at the site of an old salt dome in north Germany and more than a billion euros of public money spent – the federal government announced it was starting from scratch with its search for a suitable site for a “deep geological repository” in which to store spent fuel.

Germany is not alone. “None of the countries which started to use nuclear fission for power production 50 years ago have an acceptable solution for nuclear waste and final storage.