UFO files: photographs of 'UFO next to RAF jet' The seven files, produced by the DI55 branch of the Defence Intelligence Staff, relate to the period between November 1987 and April 1993 and contain details of around 1,200 separate UFO sightings. 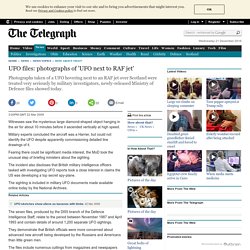 They demonstrate that British officials were more concerned about advanced new aircraft being developed by the Russians and Americans than little green men. The files include numerous cuttings from magazines and newspapers relating to rumours that the US military was developing a hypersonic spy-plane known as Aurora.

Attached to one article about Aurora from September 1991 was a note from an MoD official that read: "Attention is really focusing on this now, notwithstanding a recent USAF 'denial briefing'. "This is bound to prompt further questions/Parliamentary interest. " There is also an intelligence report quoting an October 1991 sighting in Kazakhstan of a UFO with "a semi-transparent halo and rays 'shooting out' in different directions". The janos people. UFO Brigantia newsletters (UK 1980s-1990s) - PDF archive now online (free), page 1. 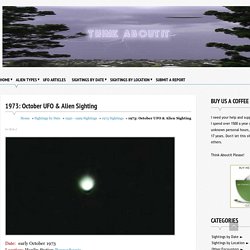 Little Sticky Legs. Why are so many bankers committing suicide? Play Video Three bankers in New York, London and Siena, Italy, died within 17 months of each other in 2013-14 in what authorities deemed a series of unrelated suicides. 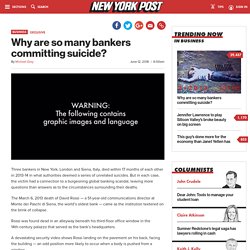 But in each case, the victim had a connection to a burgeoning global banking scandal, leaving more questions than answers as to the circumstances surrounding their deaths. UFOs - Documenting The Evidence. Uncategorized. Category Archives: Experience. The purpose of Operation Intruder is to target the worlds leaders, in whatever capacity they lead, for alien abduction. 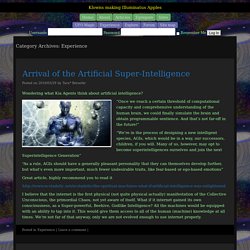 The idea is that the alien abduction experience leads to such symptoms as ontological shock, environmental awareness, increased compassion, distrust for authority, interest in decentralised spirituality and so on. And of course it is quite fun making memes and tagging politicians, bankers, ceos, media moguls, generals, terrorist leaders, dictators and oligarchs, which perhaps explains the rapid growth in this operations popularity.

However I would argue that an Operation Intruder agent should consider tagging themselves. Rockefeller Initiative Documents. UFO Researcher Nick Pope Is the British Fox Mulder and His Country Needs Him Now. Back in the early ‘90s, when The X-Files first came to television, Nick Pope could use the show to explain his job. 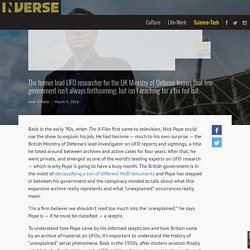 He had become — much to his own surprise — the British Ministry of Defense’s lead investigator on UFO reports and sightings, a title he toted around between archives and active cases for four years. After that, he went private, and emerged as one of the world’s leading experts on UFO research — which is why Pope is going to have a busy month. The British government is in the midst of declassifying a ton of different MoD documents and Pope has stepped in between his government and the conspiracy minded to talk about what this expansive archive really represents and what “unexplained” occurrences really mean. “I’m a firm believer we shouldn’t read too much into the ‘unexplained,’” he says.

Pope is — if he must be classified — a skeptic. Special Branch and Mars Sector 6. ‘Special branch operatives tailed a UFO cult leader who said he was in telepathic contact with aliens, it emerged today’, announced London’s Daily Express on 28 July. 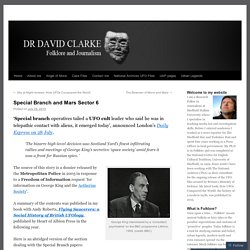 ‘The bizarre high-level decision saw Scotland Yard’s finest infiltrating rallies and meetings of George King’s secretive ‘space society’ amid fears it was a front for Russian spies. The Inconvenient Truth is Out There… The truth about the British Government’s interest in UFOs has been released by The National Archives. 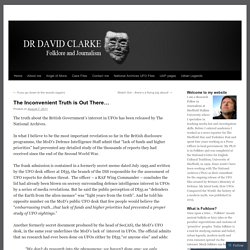 In what I believe to be the most important revelation so far in the British disclosure programme, the MoD’s Defence Intelligence Staff admit that “lack of funds and higher priorities” had prevented any detailed study of the thousands of reports they had received since the end of the Second World War. The frank admission is contained in a formerly secret memo dated July 1995 and written by the UFO desk officer at DI55, the branch of the DIS responsible for the assessment of UFO reports for defence threat.

The officer – a RAF Wing Commander – concludes the lid had already been blown on secrecy surrounding defence intelligence interest in UFOs by a series of media revelations. But he said the public perception of DI55 as “defenders of the Earth from the alien menace” was “light years from the truth”. UFO over Retford 2004? House of Commons Hansard Written Answers for 25 Oct 2007 (pt 0008) 25 Oct 2007 : Column 476W—continued Thefts of weapons are investigated by the Service Police, Ministry of Defence Police or the Home Department Police, either jointly or independently. 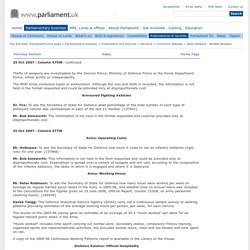 The MOD holds numerous types of ammunition. Although the loss and theft is recorded, the information is not held in the format requested and could be provided only at disproportionate cost. Armoured Fighting Vehicles Dr. House of Commons Hansard Written Answers for 26 Apr 2006 (pt 5) 26 Apr 2006 : Column 1106W—continued Gulf Veterans Sandra Gidley: To ask the Secretary of State for Defence what funding has been received by the Gulf Veterans' Medical Assessment Programme in each year since 1993. [64762] Mr. 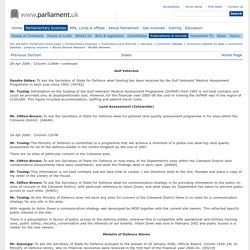 JAR Magazine: In Memoriam. The Linda Cortile UFO Abduction. Www.ufocasebook.com/pdf/projectcondign.pdf. 20130419001207uap_exec_summary_dec00_pdf.pdf. WordPress.com - Get a Free Website and Blog Here. Best UFO Crash Cases. British MOD still witholding secret UFO documents. - Phoenix ufo. The British Ministry of Defence is still withholding high-level UFO public policy papers, along with other UFO documentation, despite the public stance that all material has been transferred to the National Archives, according to John F. 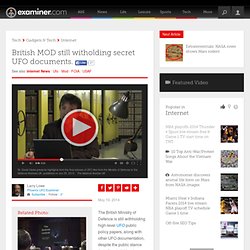 Burroughs, a retired USAF security officer. What’s the status of today’s UFO community? Have a look. Alien abduction, human-ET hybrids, hypnotic regression, repressed memories, medical quackery and conspiracy theories are currently a part of the UFO landscape. All pseudoscience. All dragging down the credibility of the subject. Thanks to Jack Brewer of The UFO Trail for providing me with notice of an excellent two-part piece he wrote on the current state of UFO research, its leaders, its critics and what happens now. If you are at all interested in UFOlogy or how a field of study evolves due to personalities and agendas, have a look. The UFO Trail: Carol Rainey: Open Letter to the UFO Community. The following open letter was provided Sunday to The UFO Trail by Carol Rainey. Learn more about Ms. Rainey and her work by visiting her website, carolrainey.com, viewing her YouTube channel and watching her videos posted in the sidebar to the right.

THE UFO CASEBOOK, Cordell Hull saw Alien Bodies in Glass Tubes. UFOs and the Guy Hottel Memo. An FBI memo in 1950 regarding an unconfirmed account of “flying saucers” still stirs interest. It’s the most popular file in the FBI Vault—our high-tech electronic reading room housing various Bureau records released under the Freedom of Information Act. Over the past two years, this file has been viewed nearly a million times. Yet, it is only a single page, relaying an unconfirmed report that the FBI never even followed up on. The file in question is a memo dated March 22, 1950—63 years ago last week. Index of /ISGP/UFOs/press_reports. Intellectual Property. The Grey Alien Agenda: aka From Chemtrails to Pseudo-Life (FULL LENGTH VIDEO) The Secret Files The Welsh Triangle. Originally published in Fortean Times 200 (2005) The West Wales flap of 1977 is second only to the Warminster “Thing” in British UFO history.

Documents released in 2005 have revealed how a secret military investigation was launched into claims that alien craft and their tall humanoid occupants were taking a particular interest in the Welsh coastline. DAVID CLARKE investigates. The death in 2003 of veteran Welsh UFOlogist Randall Jones Pugh passed without notice within the UK UFO community.

But less than three decades ago Pugh, a retired vet, was a leading spokesman for the subject and the key promoter of Britain’s hottest new UFO “flap”. Earlier in the year Pugh, in an interview for a local paper, discussed sightings in 1976 and predicted there soon would be a spate of similar events in West Wales. Babylon Wales: The Welsh Triangle. To most people 1977 is synonymous with punk rock but in West Wales it is more closely associated with UFOs and aliens in silver suits. You’ve Been Saucer-Spied! UFO Conferences: “They” Are Watching. UFOs: The Exposed Secret. Pdf_en/the hunt for zero point.pdf. Milton Torres 1957 UFO Encounter. Government UFO files released July 2012.. - Weird and Strange News. RENDLESHAM UFO - Another Perspective (Jerry Cohen) A Definition and Explanation.

The Broad Haven School UFO Incident Wales - 1977 Part 1. Alien Files Solway Firth Spaceman. Bolender2.jpg (849×1100) Need to Know: UFOs, the Military and Intelligence - Timothy Good. Www.buckingham.ac.uk/wp-content/uploads/2011/09/Polonnaruwa-meteorite.pdf. National Geographic viser nyt dansk UFO-vidne. D-notices – UFOs – Crop Circle debunking in an easily deniable form and Nick Pope; strings still being pulled… The UMMO Affair: Are Extraterrestrials Living Among Us? Evidence For A Cover-Up and A Story About Talking To Aliens by Grant Cameron. You are Being Lied To: The Disinformation Guide to Media Distortion, Historical Whitewashes, and Cultural Myths by Russ Kick - Reviews, Discussion, Bookclubs, Lists. Www.sagepub.com/upm-data/5238_Croteau_Chapter_3.pdf. Demands on UFO Researchers by the Media and Groupsl by Dennis Balthaser.