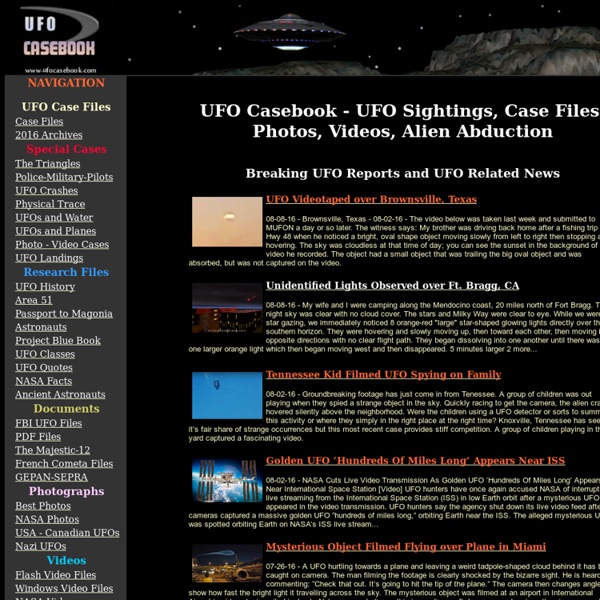 Interested in a UFO Sighting? Head to Bali 04-17-14 - Fireballs (regarded as UFOs in some communities) are dropping from the sky in droves. From Texas to Bali, Indonesia, the so-called fireball phenomenon is occurring more frequently. At least, in recorded terms. From YouTube to Facebook, videos of unidentified flying objects are being posted from various parts of the world.

Browse like Bond: Use any computer without leaving a trace with Tails If James Bond logs on to a computer, he doesn't want to leave a bunch of files, cookies, or his IP address out there for someone to find. It might seem extreme, but sometimes it's a good idea to take the same precautions yourself. In this post, we'll walk through how to use a USB stick or DVD to anonymize, encrypt and hide everything you do on a computer no matter where you are. When we say "browse without leaving a trace", we truly mean it. Using the Linux-based, live-boot operating system Tails (The Amnesiac Incognito Live System), you can use any computer anywhere without anyone knowing you were ever on it. Tails is a portable operating system with all the security bells and whistles you'll ever need already installed on it.

FBI The FBI’s Reading Room contains many files of public interest and historical value. In compliance with the National Archives and Records Administration (NARA) requirements, some of these records are no longer in the physical possession of the FBI, eliminating the FBI’s capability to re-review and/or re-process this material. Please note, that the information found in these files may no longer reflect the current beliefs, positions, opinions, or policies currently held by the FBI. 'Hellish nightmare of suffering and devastation': 10-year-long game predicts grim future for humanity The world in 3991AD ... a “hellish nightmare of suffering and devastation". This post was originally published on Mashable. Can the fate of humanity be predicted by a video game? On Tuesday morning, Reddit user Lycerius wrote a post in r/gaming asking for help with his 10-year-long Civilization II game. He described the world of 3991 AD as a "hellish nightmare of suffering and devastation".

The 100 Best Films Of World Cinema From Brazil to Japan to France and Senegal, from Neo-Realism to Dogme to J-horror, we've compiled a list of the very best films not in the English language (note: features, not documentaries). So rustle up some sushi, strike up a gauloise and make sure you've locked your bicycle as we count down the top 100 world cinema movies... 100. Night Watch Year: 2004Country: RussiaDirector: Timur Bekmambetov Milan’s Vertical Forest Wednesday, 12 October 2011 GreenMuze Staff Milan’s Vertical Forest from Stefan Boeri Architects. The Bosco Verticale (Vertical Forest) will be the greenest building in Milan when completed, which is one of Europe’s most polluted cities. Designed by Stefan Boeri Architects, as part of their BioMilano vision to incorporate 60 abandoned farms into a greenbelt surrounding the city. The Bosco Verticale building has a green façade planted with dense forest systems to provide a building microclimate and to filter out polluting dust particles.

What Female Disney Characters Might Look Like in Real Life Mar 17, 2012 Jirka Väätäinen is a Finnish designer and photographer currently studying graphic design at the Art University College at Bournemouth. His series on Behance titled Envisioning Disney Characters in “Real Life” is one of the most ‘appreciated’ (think of it as a Like on Facebook) projects of all time on Behance with 14,528 thumbs up at the time of this posting. Noise-Canceling Tech Lets You Quietly Dine in Noisy Restaurants How many times have you gone out for some fancy food, and ended up spending the evening yelling into the ear of your dinner companion? An accomplished sound engineer has figured out a way to solve that problem, using technology similar to that of noise-canceling headphones. Using 123 cleverly hidden speakers, an array of highly sensitive microphones and noise-canceling technology, sound engineer (and now restaurant owner) John Paluska has teamed up with Meyer Sound to create a way to make the noise of conversation cancel itself out, letting him control the ambient sound levels in his restaurant using an iPad app.

Top 6 Sites that Inspire and Educate If you’re a professional who likes to be intellectually stimulated and you enjoy keeping up with the latest news and breaking trends, the internet provides you with an endless choice of carefully curated sites to visit. Today, we bring you six of them that we believe are leaps and bounds above the rest. These sites will not only educate you on topics ranging from business and technology to art and design, they’ll motivate you to find your own, original ideas and see them through.