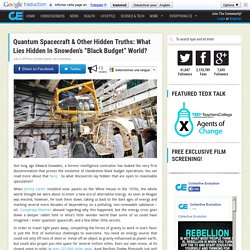 You can read more about that here. So what discoveries lay hidden that are open to reasonable speculation? When Jimmy Carter installed solar panels on the White House in the 1970s, the whole world thought we were about to enter a new era of alternative energy. As soon as Reagan was elected, however, he took them down, taking us back to the dark ages of energy and marking several more decades of dependency on a polluting, non-renewable substance – oil.

Conspiracy theories abound regarding why this happened, but the energy crisis goes down a deeper rabbit hole in Alice’s little wonder world than some of us could have imagined – enter quantum spacecraft, and a few other little secrets. Mustafa’s was not the only invention in recent years that belied conventional energy limitations, though. Don’t get me wrong. The Betz Sphere: Mysterious Alien Device? On May 26, 1974, Terry Betz and his parents were inspecting the damage caused by a brush fire on their woodland property east of Jacksonville, Florida. 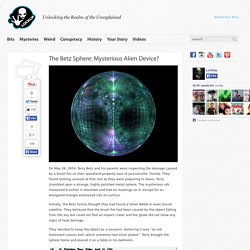 They found nothing unusual at first, but as they were preparing to leave, Terry stumbled upon a strange, highly polished metal sphere. The mysterious orb measured 8 inches in diameter and had no markings on it, except for an elongated triangle embossed into its surface. Initially, the Betz family thought they had found a fallen NASA or even Soviet satellite. They believed that the brush fire had been caused by the object falling from the sky but could not find an impact crater and the globe did not show any signs of heat damage. They decided to keep the object as a souvenir, believing it was “an old fashioned cannon ball, which someone had silver plated.” Two weeks later, Terry wanted to entertain a guest by playing his guitar. Over the next few days, the orb exhibited an even stranger behavior as if it were intelligently controlled.

The Polarized Vacuum “Onion Drive” Propulsion System. The information offered on this webpage is a very brief look at a UFO drive system that will help to explain the “hyper drive UFO” phenomenon, whereby UFO craft are observed to project a beam of energy ahead of them and appear to ride into that beam – and thus are pulled rather than propelled by the UFOs generated forces. 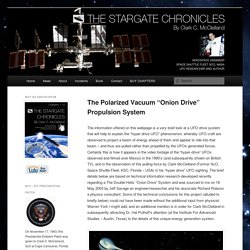 Certainly this is how it appears in the video footage of the “hyper-drive” UFOs observed and filmed over Mexico in the 1990’s (and subsequently shown on British TV), and in the observation of this pulling force by Clark McClelland (Former ScO, Space Shuttle Fleet, KSC, Florida – USA) in his “hyper drive” UFO sighting. The brief details below are based on technical information research-developed recently regarding a The Double-Helix “Onion Drive” System and was sourced to me on 18 May 2003 by Jeff Savage an engineer/researcher and his associate Richard Robson a physics consultant. Why only in short pulses ? Gravitational g-forces for the occupants of such craft ? David Sereda, Nikola Romanski, and how they fit together. 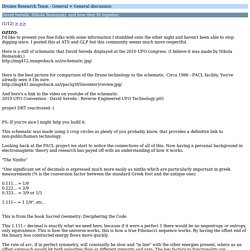 OZfZO: I'd like to present you fine folks with some information I stumbled onto the other night and haven't been able to stop digging since. I posted this at ATS and GLP but this community seems much more respectful. Here is a still of schematic that David Sereda displayed at the 2010 UFO congress. (I believe it was made by Nikola Romanski.) Here is the best picture for comparison of the Drone technology to the schematic. And here's a link to the video on youtube of the schematic. 2010 UFO Convention - David Sereda - Reverse Engineered UFO Technology p05 project DRT reactivated :) PS: If you're nice I might help you build it. This schematic was made using 3 crop circles as plenty of you probably know, that provides a definitive link to non-public/human technology.

Looking back at the PACL project we start to notice the connections of all of this. "The Ninths" 1.111~ = 1 1/9", etc.. CARET technology un-debunked. Drones dimensions and location measurements.