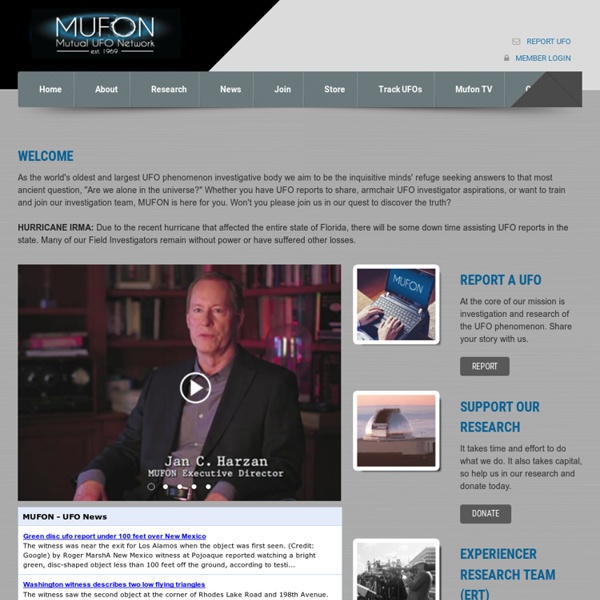 Raymond Fowler Dan Boudillion: Ray, with 5 books on the Andreasson affair, you and your name have become inexorably linked with it. I find it suggestive that in the end the same thread of buried contact memories may have run a parallel course through your life as well. Are your and Betty Andreasson Luca’s experiences linked at some deeper level beyond coincidence? If so, what do you think its all about and where do you think its all going? Dan Boudillion Ray Fowler: I don’t know. I do know that I was attracted to her case not only because Dr.

UFO Information UFO Information Center This page provides links to a variety of sources of reliable, verifiable information dealing with the UFO cover-up. Our most basic material is listed first, followed by other resources which delve deeper for those interested in more. Tips for Reading Scientific Research Reports Not all science or research is created equal. Some research is likely to hold more weight than other research. Researchers and academics often recognize quality research readily, while others — even other professionals such as doctors and clinicians — may struggle with understanding the value of any given journal article. The intent of this article is to provide some basic tips on reading research reports. I will assume you already have at a least a basic understanding of different methods and statistical procedures used in analyzing research data.

The 37th Parallel a UFO Highway? Opemmindstv explains, “Ex-Deputy Sherriff Chuck Zukoswki has spent 25 years investigating mysterious phenomena across America. From his extensive research he’s spotted an alarming pattern – a growing list of eye-witness UFO reports along a 3,000 mile stretch through the heart of America. This stretch of UFO sightings corresponds with the 37th degree parallel, and Chuck has noticed that a number of military bases, including the famous Area 51, exist on the same parallel.

GrahamHancock.com I don't want GRAHAMHANCOCK.COM to be exclusively a Graham Hancock site, but a place where ideas and perspectives on the past can be put forward and discussed by other writers and researchers as well -- and indeed by anyone with something interesting to say and the ability to say it. Accordingly I'm offering this section of the site as a FORUM for the excellent writing and thought-provoking ideas of others. I offer no set guidelines as to what is or is not "relevant". If you think that a piece of your own original writing would fit in well in these pages then please submit it to me for consideration. You should feel completely free to express points of view, opinions, ideas and beliefs with which I may profoundly disagree; all that matters is that you should express them well in a manner which may be of interest or of value to others.

40 Useful Photoshop Tutorials for Photo Manipulation « JinSpiration Since our last Photoshop tutorial, Photoshop Tutorials: Compilation of some stunning text effects, we got so much positive feedback that we decided to put together another collection of tutorials concentrating on photo manipulation. In this post, you’ll find everything from Pencil Sketching Effect to Creating A Slow Motion Bullet Shot Effect in Photoshop. Now the hard part will be deciding which of these amazing tutorials you will use in your next creations. Maurice Chatelain talks about UFOs Critical Note: "when James Oberg contacted Chatelain's employers he learned that Chatelain was no longer employed by them when Apollo 11 landed on the moon. If he was no longer an employee of a NASA sub-contractor then he could not have been present in any so-called "secret room" where he could overhear the confidential communications of the astronauts on the lunar surface. He was a low-level engineer who worked for a NASA sub-contractor who built the Apollo communications systems. His status as the "head of communications" (as some UFOlogists have claimed), is entirely false." In 1979 Maurice Chatelain, confirmed that Armstrong had indeed reported seeing two UFOs on the rim of a crater.

7 new Earth-like exoplanets discovered, NASA announces Talk about lucky number seven. Astronomers have discovered not one, not two, but seven Earth-sized planets orbiting a star called TRAPPIST-1. What’s more, three of them are in the habitable zone— the happy place where liquid water can exist on the surface of rocky planets, as it’s not too hot or cold. (Although liquid water could potentially exist on any of the seven, NASA said, it likes the odds on those three best.)