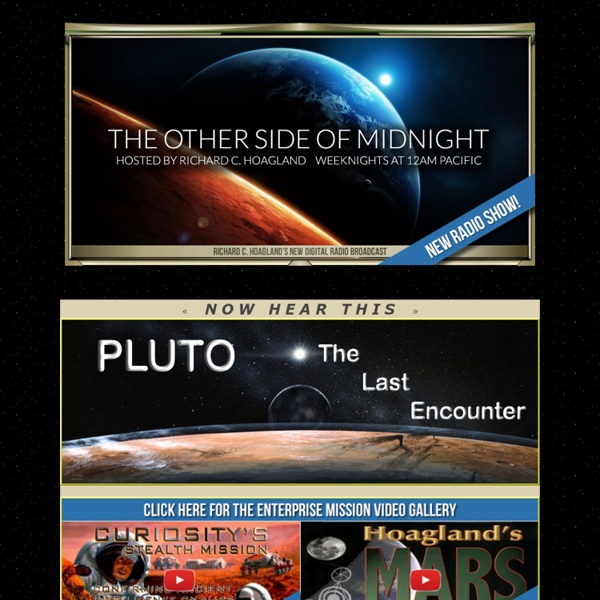 "It's hard to image why such bullet-proof evidence was denied for such a long time, and why those so vigorously denying it never did so by meeting the science, but merely by brushing it away. Of course, now that it must be acknowledged by all that there is liquid water on the surface of Mars, this starts those denying the validity of the Mars LR data down the slippery slope leading to life." -- Dr. Gil Levin, Chief Project Scientist on the Viking Labeled Release Experiment NASA Announces Liquid Water on Mars at Tuesday Press Conference Claim Confirms Previous Enterprise Mission Research and Major aspects of Hoagland's Mars Tidal Model

Does the Universe Need God? I’ve had God on my mind lately, as I’ve been finishing an invited essay for the upcoming Blackwell Companion to Science and Christianity. The title is “Does the Universe Need God?“, and you can read the whole thing on my website by clicking. I commend the editors, Jim Stump and Alan Padgett, for soliciting a contribution that will go against the grain of most of the other essays.

How To Have An Out of Body Experience: First Steps Last updated on July 13, 2012 at 12:00 am EDT by in5d Alternative News * Visit in5D Connection where you can find your soul mate or join one of our amazing groups. EVERYONE is welcome! The Secret Sun: Sirius Star: Pirate Fighters or Welcome Wagon? (UPDATED) Well, you knew this was coming. We're now going to have an international phalanx of warships in the Gulf of Aden and presumably, the Red Sea and Indian Ocean. US Navy Rear Admiral Terence McKnight has been named the commander of the new force, called Combined Task Force 151 (CTF-151), the US Fifth Fleet said in a statement from its headquarters in Bahrain. Ships from other navies, including Canada, Iran, India and China, have also been patrolling one of the world's busiest sea lanes - the waters of the Gulf of Aden and the Indian Ocean leading to and from the Suez Canal. A spokeswoman for the force, Commander Jane Campbell, said the area the pirates operate in is larger than the Mediterranean Sea and the shipping lane the force will patrol is 480 miles (780km) long. Despite only two successful hijackings in December, Somali pirates still hold about 15 ships carrying more than 200 crew members.

The True Colours of Mars This site uses cookies to store information on your computer. Some of these cookies are essential to make our site work and others help us to improve by giving us some insight into how the site is being used. Some cookies on this site are essential, and the site won't work as expected without them.

UFO Part 1 of 16 The FBI’s Reading Room contains many files of public interest and historical value. In compliance with the National Archives and Records Administration (NARA) requirements, some of these records are no longer in the physical possession of the FBI, eliminating the FBI’s capability to re-review and/or re-process this material. Please note, that the information found in these files may no longer reflect the current beliefs, positions, opinions, or policies currently held by the FBI. The image quality contained within this site is subject to the condition of the original documents and original scanning efforts.

Roswell Timeline - We Are Not Alone Detachment 3 of the 9393rd technical services unit Alamogordo AAF was responsible for the locating and transportation of the large sections of the craft. A special radiobiological and security detail team from Sandia Base under orders from Col S.V. Hasbrouck , secured immediate area. Select scientists from General Advisory Committee of the Atomic Energy Commission including Dr.

The Secret Sun: "Behold, Atlantis Rising!" (UPDATED 11/22) I am absolutely speechless: "Dubai has thrown a spectacular light show to celebrate a new $1.5bn marine-themed resort built off the Gulf coast on an artificial island in the shape of a palm tree. Organisers claimed that the fireworks display for the $20m party could be seen from space," the BBC says. Seen from space? For whose benefit? A GIFT (Girls In Flight Training) for woman aviators « P3air Our listed service and training courses can be booked online. All of our services are offered all year long. If you can’t find it for a particular date, please contact us and we’ll work something out. In an airplane such as the Caravan, one that gets flown by a single pilot, often in demanding conditions, there’s no doubt that all of this adds up to greatly increased safety and capability.

Paranormal Patterns ( Historical) - Paranormal Intelligence Agency This is the first DEEP BLACK report to be published by P.I.A. We make it available for free to the public. Future DEEP BLACK reports will available soon in our coming web store. The Secret Sun: AstroGnostic: Trapped Here on this Alien World-UPDATED!!! NOTE: Scroll to bottom of post for important update. Well, here we are- it's Twilight time again. The Gnostic vampire-superhero phenomenon is about to descend on multiplexes all across the planet, enrapturing tween girls in ways not seen since the glory days of N'Sync and the Backstreet Boys. And most significantly for our purposes, Twilight creator Stephanie Meyer is a Mormon- a member of the Church of Latter-Day Saints- and the Twilight books are widely seen as Mormon allegories. Amie Charney (a Christian blogger) detailed the links, darkly warning that those dastardly Mormons "believe in deification – you can become a god or goddess through their various rituals and practices," preach a doctrine "called “eternal progression...where it is a core belief for even a god or goddess to learn (progress) for eternity," that Mormon is "all about the family" (horrors!) Wait- I'm missing the exact problem here.

Bio-Station Alpha: Google Finds Life on Mars? (Video) By Belinda McCallumEpoch Times Staff Created: June 6, 2011 Last Updated: June 7, 2011 Martines: "This could be the most important discovery on Mars yet!" David Martines, an amateur astronomer, was exploring the red planet from his armchair using Google Mars when he came across a bizarre surface anomaly that he nicknamed “Biostation A.” Secret Space Programs During World War II, a top secret espionage program was led by the United States Navy to infiltrate the black programs of Nazi Germany that were successfully building antigravity space craft capable of interplanetary flight. Covert naval operatives were embedded inside a number of Nazi Germany’s advanced aerospace programs and tasked to report back what they had seen. This information was then relayed onto various U.S. corporations specifically contracted by the Navy that would begin designing and eventually building a variety of antigravity vehicles, including kilometer long space carriers.

Interplanetary Phenomenon Unit Interplanetary Phenomenon Unit July 1947 office of A.C. of S., G-2 By authority of: Lt. The Secret Sun: Astronaut Theology: Kirby Meets Hoagland That's Orion that Kirby is drawing there... This is awesome- two of my favorite visionary madmen, Jack Kirby and Richard Hoagland, meet in Cyberspace in Hoagland's exploration of Mars Face symbolism in pop culture, which touches on Kirby's astonishingly prescient Face on Mars story. Incan Visitation by Jack Kirby (which I have on my wall here!) A lot of you out there may not realize that Hoagland has done a lot of very interesting work on symbology, alternative history and secret societies (which in my view are all related), as well as work on Mars and UFOs. I'd put his semiotic/conspiracy work up against anyone out there, and you can bet he had a very big influence on researchers like Goro Adachi. A lot of people may consider him a crank, but I consider him a pioneer and a prophet, mapping out the terra incognita every curious mind will be trudging through in the coming years.

Richard Hoagland - The face on Mars author who is often beyond brilliant, but also at timesa bit nuts. The problem is with quantum physics and UFOs it can be hard to tell the two apart by glib Jul 3