A Father Who Creatively Captures His Kids (20 photos) 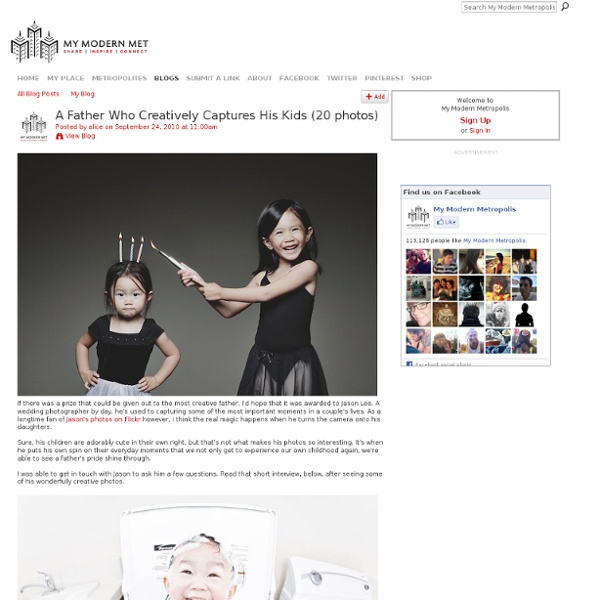 If there was a prize that could be given out to the most creative father, I'd hope that it was awarded to Jason Lee. A wedding photographer by day, he's used to capturing some of the most important moments in a couple's lives. As a longtime fan of Jason's photos on Flickr however, I think the real magic happens when he turns the camera onto his daughters. Sure, his children are adorably cute in their own right, but that's not what makes his photos so interesting. It's when he puts his own spin on their everyday moments that we not only get to experience our own childhood again, we're able to see a father's pride shine through. I was able to get in touch with Jason to ask him a few questions. Q: How did you get into photography? Q: How do you come up with such creative photos of your daughters? Q: How has being on Flickr helped you with your business? Q: Any inspirational stories you'd like to share? Q: Do you have any advice for aspiring photographers? Q: Any quotes you live by?

The Great Geek Manual » The World’s Most Beautiful Libraries I make no secret of the fact that I’m a hardcore bibliophile, but we’re a common enough lot these day. And the one sight that always makes me linger over a webpage is rows and rows of neatly organized books. So, in an effort to draw more like-minded read here to my little blog, I decided to round-up a gallery of photos of some of the most beautiful libraries I’ve ever seen photos of.

Top 5: Places to visit with a Harry Potter theme Visit the magical Alnwick Castle iStockphoto / Thinkstock The final Harry Potter film Harry Potter and the Deathly Hallows Part II premieres on 7 July, marking the end of an era for a generation of film buffs; but the magic of Hogwarts and its famous bespectacled graduate will live on at a number of locations. We’ve chosen five must-see haunts for Potter fans.

Disney Princesses In Accurate Period Costume These are very beautiful drawings! Although I am sad to see Belle looking so unlike herself. On a different note: I’d love to know what the reference was for the period costuming for each Princess. Given what I know about the stories, a lot of these seem a little inaccurate time period wise (I have no idea about the costumes other than that they look gorgeous): - As far as I know, the German “Snow White” was published in 1812 with the rest of the Grimm’s collected works; even her supposed ‘real’ influence lived in the 18th century. Earlier versions do exist, but with very significant differences, since this the Disney (and thus, Grimm) version we’re talking about, it seems odd to use the style of a much earlier period.

30 of the Worlds Greatest Wedding Cakes Few things are more important on a wedding day (apart from both partners turning up; the ring being secure; and nobody objecting during the ceremony) than the cake. Very few weddings are without such a centrepiece. It's just a shame that so many couples opt for the same traditional, boring designs when there is so much opportunity to impress and surprise the guests. Here are 30 brilliant examples, to be used as inspiration for your own big day. Top Entrepreneurs Warn Congress: PROTECT IP Will Stifle Innovation &038;... Lots of people have been speaking up about why PROTECT IP is a terrible, terrible idea that will have massive unintended consequences for innovation online. We've seen the biggest names in venture capital tell Congress that PROTECT IP would chill investment in new innovations. We've seen top technologists explain how PROTECT IP messes with fundamental infrastructure and security elements of the internet.

Visiting 10 of the Most Interesting Abandoned Places on Earth Travelers looking for a getaway from the normal getaway should skip the sandy beaches to walk amid silent relics in Namibia, Chernobyl or an abandoned California gold mining town. These empty places may look like Scooby Doo set pieces, but they hold important clues to bigger mysteries about both the past and the future; the creep of urban decay and the necessity of memorializing tragedy. Sometimes history lives alone. We bring you 10 modern ghost cities where you can choose your own adventure, exploring what once was and what could have been. Hashima Island, Japan

Miniature Art on the Tip of Pencil by Dalton Ghetti Many artists have used pencils to create works of art – but Dalton Ghetti creates miniature masterpieces on the tips of pencils. Dalton, who works as a carpenter, has been making his tiny graphite works for about 25 years. A sculpture of Elvis Presley wearing shades, carved from a single pencil. The 49-year-old said: “At school I would carve a friend’s name into the wood of a pencil and then give it to them as a present. Later, when I got into sculpture, I would make these huge pieces from things like wood, but decided I wanted to challenge myself by trying to make things as small as possible. I experimented sculpting with different materials, such as chalk, but one day I had an eureka moment and decided to carve into the graphite of a pencil”

70 Photos That Will Take Your Breath Away We here at DPShots believe that the easiest way to learn photography is to learn it by example. Every now and then we come up with some amazing photography examples that take your breath away. This post is no different. We have collected some of the most amazing, most awesome and THE most beautiful photography we could ever get our hands on. This post will help a lot of budding photographers to see where they are headed. It shows what is possible with Photography and a bit of creative thinking.

20 PSD Tuts That Will Turn You Into A Photoshop Guru Many people can use Photoshop, but only a select few can call themselves gurus. Learn all the methods in the 20 tutorials below and you’ll be well on your way to joining this elite. Rather than focus on tuts for beginners, intermediates or advanced users, we’ve simply chosen ones which produce jaw-dropping effects. All of them are easy to follow, although most do require at least some prior knowledge and experience. 40 Beautiful and Very High-Resolution Wallpapers Do you have a boring desktop wallpaper? Are you tired of looking at the same, old desktop wallpaper? Well, here’s the remedy. This collection contains beautiful, high-quality and high-resolution (at least 1900x1200px) wallpapers. I hope you will find several wallpapers to refresh and invigorate your workspace.

Lesson Plan for Making a Speaker Laboratory ©1995 The Regents of the University of California by Regan Lum Introduction: Trick Photography with Album Covers Trick Photography with Album Covers February 12th, 2010 | Inspiration | See what happens when people use sleeves from classic vinyl records to spice up their photographs, the results are truly spectacular… Sleeveface is an international phenomenon wherein one or more persons obscure or augment body parts with record sleeve(s), causing an illusion. [image credit: Tim Caynes] Split Family Faces Cousins: Justine, 29, & Ulric, 29 How much do you and your family members really look alike? Quebec, Canada-based graphic designer and photographer Ulric Collette has created a shockingly cool project where he's exploring the genetic similarities between different members of the same family. By splitting their faces in half and then splicing them together, he creates interesting new people that are sometimes quite normal looking and other times far from it.