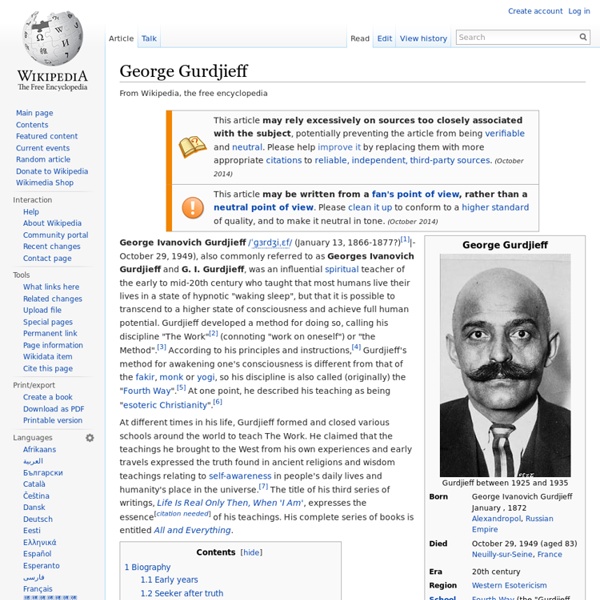 George Ivanovich Gurdjieff /ˈɡɜrdʒiˌɛf/ (January 13, 1866-1877?)[1]|- October 29, 1949), also commonly referred to as Georges Ivanovich Gurdjieff and G. I. Gurdjieff, was an influential spiritual teacher of the early to mid-20th century who taught that most humans live their lives in a state of hypnotic "waking sleep", but that it is possible to transcend to a higher state of consciousness and achieve full human potential. At different times in his life, Gurdjieff formed and closed various schools around the world to teach The Work. §Biography[edit] §Early years[edit] §Seeker after truth[edit] In early adulthood, according to his own account, Gurdjieff's curiosity led him to travel to Central Asia, Egypt, Iran, India, Tibet and Rome, before returning to Russia for a few years in 1912. §Businessman[edit] §In Russia[edit] In the midst of revolutionary upheaval in Russia, Gurdjieff left Petrograd in 1917 to return to his family home in Alexandropol. §In Georgia and Turkey[edit]

Rumi Jalāl ad-Dīn Muhammad Balkhī (Persian: جلال‌الدین محمد بلخى‎), also known as Jalāl ad-Dīn Muhammad Rūmī (Persian: جلال‌الدین محمد رومی‎), Mawlānā or Molānā (Persian: مولانا‎, meaning Our Master), Mawlawī or Molavi (Persian: مولوی‎, meaning My Master), and more popularly in the English-speaking world simply as Rumi (30 September 1207 – 17 December 1273), was a 13th-century Persian[1][6] poet, jurist, theologian, and Sufi mystic.[7] Iranians, Turks, Afghans, Tajiks, and other Central Asian Muslims as well as the Muslims of South Asia have greatly appreciated his spiritual legacy in the past seven centuries.[8] Rumi's importance is considered to transcend national and ethnic borders. His poems have been widely translated into many of the world's languages and transposed into various formats. In 2007, he was described as the "most popular poet in America. Name Life Jalal ad-Din Rumi gathers Sufi mystics. Why should I seek? Hussam implored Rumi to write more. Teachings Major works Poetic works

Bhagwan Shree Rajneesh Chandra Mohan Jain (11 December 1931 – 19 January 1990), also known as Acharya Rajneesh from the 1960s onwards, as Bhagwan Shree Rajneesh ( pronunciation ) during the 1970s and 1980s, and as Osho ( pronunciation ;) from 1989, was an Indian mystic, guru and spiritual teacher. His international following has continued after his death. A professor of philosophy, he traveled throughout India during the 1960s as a public speaker. Rajneesh's ashram in Pune[6] is today known as the Osho International Meditation Resort. Biography[edit] Childhood and adolescence: 1931–1950[edit] University years and public speaking: 1951–1970[edit] In 1951, aged nineteen, Rajneesh began his studies at Hitkarini College in Jabalpur.[19] Asked to leave after conflicts with an instructor, he transferred to D.N. After calling for a greater acceptance of sex in a 1968 lecture series (later published as From Sex to Superconsciousness), Rajneesh was dubbed "the sex guru" by the Indian press. Bombay: 1970–1974[edit] Peter B.

An Essay by Einstein -- The World As I See It "How strange is the lot of us mortals! Each of us is here for a brief sojourn; for what purpose he knows not, though he sometimes thinks he senses it. But without deeper reflection one knows from daily life that one exists for other people -- first of all for those upon whose smiles and well-being our own happiness is wholly dependent, and then for the many, unknown to us, to whose destinies we are bound by the ties of sympathy. A hundred times every day I remind myself that my inner and outer life are based on the labors of other men, living and dead, and that I must exert myself in order to give in the same measure as I have received and am still receiving... "I have never looked upon ease and happiness as ends in themselves -- this critical basis I call the ideal of a pigsty. The ideals that have lighted my way, and time after time have given me new courage to face life cheerfully, have been Kindness, Beauty, and Truth. "My political ideal is democracy.

Isha Upanishad The Isha Upanishad (Devanagari: ईशोपनिषद् IAST īśopaniṣad) is one of the shortest of the Upanishads, in form more like a brief poem than a philosophical treatise, consisting of 17 or 18 verses in total. The Upanishad constitutes the final chapter (adhyāya) of the Shukla Yajurveda and survives in two versions, called Kanva (VSK) and Madhyandina (VSM). Like other core texts of the Vedanta, it is considered revealed scripture (Śruti) by diverse traditions within Hinduism. The name of the text derives from the its incipit, īśā vāsyam, "enveloped by the Lord". It is grouped as a "Poetic Upanishad" with Kena, Katha, Svetasvatara and Mundaka by Paul Deussen (1908).[2] Its composition dates roughly to the second half of the first millennium BCE.[3] Text[edit] In the two shakhas of the Shukla Yajurveda (called the VSK and VSM) the order of verses 1–8 is the same, however VSK verses 9–14 correspond to VSM verses 12, 13, 14, 9, 10, 11. Content[edit] The first verse reads: See also[edit] References[edit]

Padmasambhava Padmasambhava[note 1] (lit. "Lotus-Born"), also known as Guru Rinpoche, was an 8th-century Buddhist master from the Indian subcontinent. Although there was a historical Padmasambhava, little is known of him apart from helping the construction of the first Buddhist monastery in Tibet at Samye, at the behest of Trisong Detsen,[1] and shortly thereafter leaving Tibet due to court intrigues.[2] A number of legends have grown around Padmasambhava's life and deeds, and he is widely venerated as a "second Buddha" by adherents of Tibetan Buddhism in Tibet, Nepal, Bhutan, the Himalayan states of India, and elsewhere.[3][4] Historical sources[edit] Mythos[edit] Sources[edit] Nyangrel Nyima Özer (1136-1204) was the principal architect of the Padmasambhava mythos according to Janet Gyatso.[8] Guru Chöwang (1212–1270) was the next major contributor to the mythos.[8] Early years[edit] Birth[edit] Tantra in India and Nepal[edit] Tibet[edit] Subjection of local religions[edit] Translations[edit] Nyingma[edit]

Peter Brook Peter Stephen Paul Brook CH, CBE (born 21 March 1925) is an English theatre and film director and innovator, who has been based in France since the early 1970s. Biography[edit] Life[edit] Brook was born in London in March 1925, the son of Simon Brook and his wife Ida (Jansen), two Jewish immigrants from Latvia.[1] He was educated at Westminster School, Gresham's School and Magdalen College, Oxford. In 1951, Brook married the actress Natasha Parry; the couple have a son and a daughter. In 1970, with Micheline Rozan, Brook founded the International Centre for Theatre Research, a multinational company of actors, dancers, musicians and others which travelled widely in the Middle East and Africa in the early 1970s. Influences[edit] Brook was influenced by the work of Antonin Artaud and his ideas for his Theatre of Cruelty. His major influence, however, was Joan Littlewood. The Mahabharata[edit] Tierno Bokar[edit] Work[edit] Major productions for the RSC[edit] Other major productions[edit] Awards[edit]

Enneagram History and Origins: The Traditional Enneagram Click here for The Stages of the Work The Enneagram of Personality Types is a modern synthesis of a number of ancient wisdom traditions, but the person who originally put the system together was Oscar Ichazo. Ichazo was born in Bolivia and raised there and in Peru, but as a young man, moved to Buenos Aires, Argentina to learn from a school of inner work he had encountered. After many years of developing his ideas, he created the Arica School as a vehicle for transmitting the knowledge that he had received, teaching in Chile in the late 1960's and early 70's, before moving to the United States where he still resides. This group spent several weeks with Ichazo, learning the basics of his system and engaged in the practices he taught them. Among the highlights for many of the participants was a system of teachings based on the ancient symbol of the Enneagram. "We have to distinguish between a man as he is in essence, and as he is in ego or personality. Type One Passion: Anger [Resentment]*

Walter Wriston Walter Bigelow Wriston (August 3, 1919 – January 19, 2005) was a banker and former chairman and CEO of Citicorp. As chief executive of Citibank / Citicorp (later Citigroup) from 1967 to 1984, Wriston was widely regarded as the single most influential commercial banker of his time.[1][2] During his tenure as CEO, the bank introduced, among other innovations, automated teller machines, interstate banking, the negotiable certificate of deposit, and "pursued the credit card business in a way that no other bank was doing at the time".[3][4] With then New York Governor Hugh Carey and investment banker Felix Rohatyn, Wriston helped save New York City from bankruptcy in the mid-1970s by setting up the Financial Control Board and the Municipal Assistance Corporation, and persuading the city's union pension funds and banks to buy the latter corporation's bonds.[5] Personal life[edit] In 1942, Walter Wriston married Barbara Brengle, with whom he had one daughter. Politics[edit] Quotes[edit]

The Electrical Dance of Uranus and Pluto The electrical dance of revolutionary Uranus and transformative Pluto outlines revolutionary phases in the development of human consciousness on a global scale. We are soon to enter the next stage of this cosmic quadrille. Richard Giles examines the trends... Historical cycles' beginnings and endings are very hard to spot from our narrow day-to-day perspective. From an astrologer's viewpoint, these cycles' directions are not always clear until afterwards. A few months ago I watched the movie Bobby, the story of Robert Kennedy Jnr, the second of the Kennedy brothers to be shot dead in the USA by an assassin. Uranus and Pluto, two of the most graphic of our outer planets in their cycle of conjunction, square and opposition, play a major part in establishing the impact of the new trends downloaded into our historical and social collective; and when they do, they cause massive alterations in our social and political fabric. Lessons and Testing Times The square occurs seven times: -