How to Ditch Big Brother and Disappear Forever 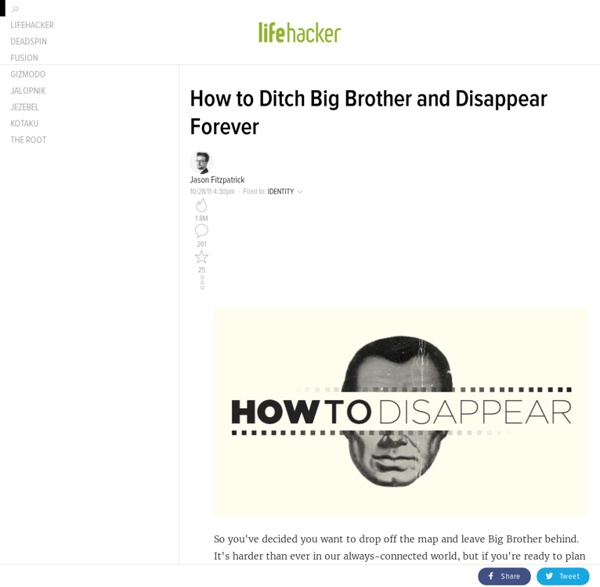 You can disappear and still communicate. it's hard to do but you need to cultivate a online persona that is nothing like you. Problem is that any Link to your past is a flashing "LOOK HERE" beacon. Used prepaid cellphones are great, they are usually registered to someone you do not know, buy a card and keep it running, in fact get several and be ready to ditch a phone if you think it's getting connected to you. Internet is easy, Open AP's are abundant. for the first few years use only open ap's and route all your traffic through a onion router. Finally you can set up a mail service to receive mail and not have it attached to you. Several companies will receive mail for you, open it, scan it, and then email it. earthclassmail.com for example. One trick I saw a friend use was to find an abandoned home near where he was living and have mail sent there if he needed a parcel. today there are so many abandoned homes that it's easy to do this and never use the same house twice.

Say hello to men who hate NSA spying but blame women for being spied on Over the weekend someone released hundreds of revealing photos of celebrities that appear to have been stolen from private storage. In response to this, a bunch of anonymous guys on the internet copied them and posted them all over the town square, because the internet is written in ink and if you are ever a victim once in your life the internet will remind you of it forever. These men are the detritus of human society for whom the internet provides a warm blanket, so let's remove the warm blanket for a minute. These men are the detritus of human society

Vanishing Point: How to disappear in America without a trace Where there's water, life is possible. True, it may be very difficult and very hard to live, depending, but anyone who's driven, hiked, or camped in the American South West will have noticed that cities and ranches crop up where there's surface water or where there's been a well dug. Within the state of California, Nevada, Arizona, Utah, New Mexico, and Colorado, there are deserts, mesas, mountains, and forests where normally people never or rarely visit; not-so-secret places where there's water, access to a road within a day's hike, and where a fairly rugged individual may hide while remaining basically healthy, marginally well fed, and reasonably sane. In this section I'll look at two such environments, neither of which I would recommend, but one of which I'd suggest is a reasonable way to live in basic health while either on the run, hiding out from the law, old girl friends, the draft for an illegal war, putative wives and such.

How to Disappear There are many reasons you might want to disappear, some honorable some not so honorable. Maybe you have a stalker or you would like more privacy, maybe you are avoiding domestic violence or identity theft... whatever the reason is here are a few tips that will help you do just that. The very first thing you should do if you would like to make your earthly presence a little less conspicuous is to stop getting your mail at the place you live. A post office box really wont do either because you need two forms of identification linking you to the place you live.

10 Things Every Guy Should Own (But Doesn’t) How would you like to be the guy that everyone guy wants to know and every girls wants to date? Are you nodding your head yes, but thinking, “that’s impossible, I’m just a cubicle worker who spends my day surfing NSFW websites?” Well cheer up and get excited because here are ten things that you should own if you’re aspiring to be the perfect man. 1. A Musical Instrument - An instrument can serve many purposes, from a profession down to a cure for boredom. City Hall Protesters Demand "Drone-Free LAPD" A boisterous group of protesters went to Los Angeles City Hall Thursday, trying to shoot down the LAPD drone program before it gets off the ground. A similar fate befell the Seattle Police Department, which offered the drones to LAPD. Gordon Tokumatsu reports from downtown LA for the NBC4 News at 6 p.m. on Thursday, August 21, 2014.

How to start your life over from scratch? If you had to walk away from your life in a split second, how would you start over? Writing a short story about a character who has to leave everything behind in his life with no prior warning. Literally set up as walking down a street and sees "x event" (something from his past) and realizes that everything associated with his current identity is compromised. Consider he has no wish other than to get away undetected and set up a new identity from scratch with only the clothes on his back and the twenty odd dollars in his pocket. I'm struggling with how my character can accomplish this. It seems like obtaining official forms of ID is a lot harder these days than just splicing a photo booth picture of yourself over someone else's drivers license a la The Fugitive or stealing the SSN of someone who is deceased like in Enough.

Marginal Revolution: How to disappear Tips from a teacher (markets in everything): There are three key steps to disappearing. First, destroy old information about yourself. Call your video store or electricity company and replace your old, correct phone number with a new, invented one. Glaucus atlanticus These sea slugs feed on other pelagic creatures including the venomous cnidarian, the Portuguese Man o' War. Because the sea slug stores stinging nematocysts from the cnidarian within its own tissues, a human picking up the sea slug may receive a very painful sting. For more information on the effects of the nematocysts, see Portuguese man o' war. Characteristics[edit]

DIY: Wine Bottle Light & Wit & Whistle November 3rd, 2009 This past spring Daniel and I went on a road trip from San Francisco to the Grand Canyon. Along the way we stopped at Chateau Julien for a wine tasting. I wanted to do something with the empty bottle instead of throwing it in the recycling bin. Meet Executive Order 12333: The Reagan rule that lets the NSA spy on Americans John Napier Tye served as section chief for Internet freedom in the State Department’s Bureau of Democracy, Human Rights and Labor from January 2011 to April 2014. He is now a legal director of Avaaz, a global advocacy organization. In March I received a call from the White House counsel’s office regarding a speech I had prepared for my boss at the State Department.