‘We Are Inside the Fire’: An Oral History of the War in Afghanistan. For the Afghan people, the last 18 years of war have taken an intimate toll. 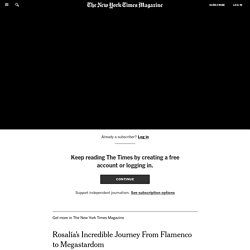 Afghan Insurgent Is Killed on an American-Led Base. “The Special Forces said that while he was being interrogated, he got angry and said something in Pashto that from his gestures seemed hostile,” Mr. 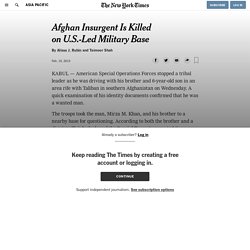 Sharif said. “Then he walked out of the room and walked toward his car.”

Guantánamo’s Darkest Secret. The next day, Salahi brought Wood and me to a friend’s wedding party, hosted by Mauritania’s best radiologist. 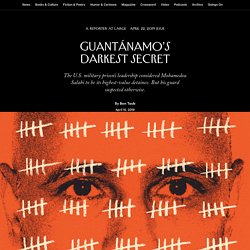 As we walked to the house, Abu Hafs al-Mauritani came out of a nearby mosque, dressed in a white turban and long robes. “Assalaamu alaikum,” he said to Mohamedou. “Peace be upon you.” Julian Assange’s Arrest Should Worry Anyone Who Cares About Freedom of the Press. Julian Assange’s strange seven-year residence in Ecuador’s London embassy has ended, and Assange, thanks to the American president he helped elect, is now in British custody facing a US extradition request. 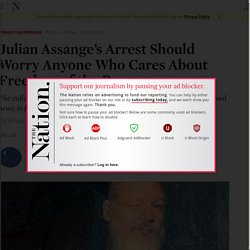 The question now is what the freshly unsealed Trump Justice Department indictment against him means, and doesn’t mean—for Assange, for the British courts, which must decide whether to hand him over, and for American press freedom. Compared with the worst that Assange and his supporters have always feared—black-hooded rendition, indictment under the Espionage Act, the death penalty—the indictment, filed under seal in 2017, may seem like good news. It’s brief—six pages. He is accused of conspiring with Chelsea Manning to hack one password on a classified government database. The Theft of Grand Staircase–Escalante.

Kleptocracy Is on the Rise in America. For two years, in the early 1990s, Richard Palmer served as the CIA station chief in the United States’ Moscow embassy. The events unfolding around him—the dissolution of the Soviet Union and the rise of Russia—were so chaotic, so traumatic and exhilarating, that they mostly eluded clearheaded analysis. But from all the intelligence that washed over his desk, Palmer acquired a crystalline understanding of the deeper narrative of those times. To hear more feature stories, see our full list or get the Audm iPhone app. Special Report - Inside the UAE’s secret hacking team of U.S. mercenaries. WASHINGTON (Reuters) - Two weeks after leaving her position as an intelligence analyst for the U.S. 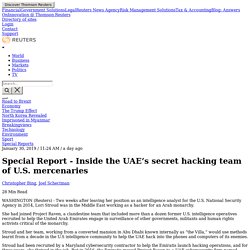 National Security Agency in 2014, Lori Stroud was in the Middle East working as a hacker for an Arab monarchy. She had joined Project Raven, a clandestine team that included more than a dozen former U.S. intelligence operatives recruited to help the United Arab Emirates engage in surveillance of other governments, militants and human rights activists critical of the monarchy.

‘I don’t trust the government to look after me or my dog’: meet the Brexit stockpilers. Jo Elgarf doesn’t look like you would imagine a prepper to look. 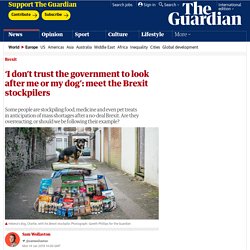 She’s not a libertarian, camouflaged and armed to the eyeballs, crawling around the woods in Montana, skinning a squirrel for breakfast and fuelling up for the apocalypse. She lives with her husband and three young children in a sleepy suburb of south-west London. Elgarf is happy to call herself a prepper, though; she is a member – and a moderator – of one of a growing number of prepper groups on social media. BART officer provides evasive and contradictory testimony in Mehserle murder trial. 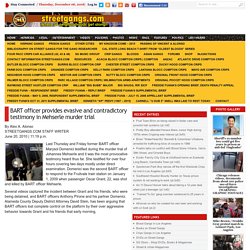 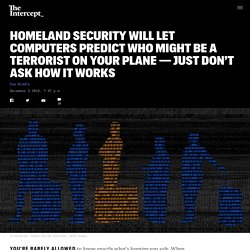 When you fly, you’re subject to secret rules, secret watchlists, hidden cameras, and other trappings of a plump, thriving surveillance culture. The Department of Homeland Security is now complicating the picture further by paying a private Virginia firm to build a software algorithm with the power to flag you as someone who might try to blow up the plane. In 'Quiet Skies' program, TSA is tracking regular travelers like terrorists in secret surveillance. “I Don’t Want to Shoot You, Brother” At 9:06 a.m. on Oct. 10, 2017, Rob Alexander, the chief of police in Weirton, took a seat in an office in downtown Wheeling. 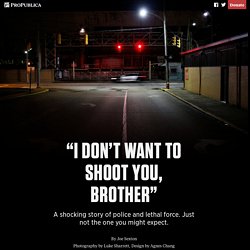 He was about to take part in a first for him: giving sworn testimony about his decision to fire one of the three officers involved in the death of Williams. Alexander stated his name, swore to tell the truth and got the basics out of the way. He said he had been a member of the Weirton Police Department for 23 years, the last three as chief. “What are your job duties in your current position as chief of police?” The Would-Be Terrorist vs. the FBI. Why a random federal agency gets to decide which devices we tinker with. Protecting Energy Infrastructure. ‘The SOS in my Halloween decorations’ Image copyright Flying Cloud Productions. 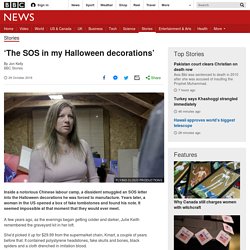 Turkey's Financial Crisis Shows the Risks of Strongmen. Edward Snowden: Smartphones can be hacked into with just one text message and then used to spy on their owners. Meet Executive Order 12333: The Reagan rule that lets the NSA spy on Americans. John Napier Tye served as section chief for Internet freedom in the State Department’s Bureau of Democracy, Human Rights and Labor from January 2011 to April 2014. He is now a legal director of Avaaz, a global advocacy organization. In March I received a call from the White House counsel’s office regarding a speech I had prepared for my boss at the State Department. The speech was about the impact that the disclosure of National Security Agency surveillance practices would have on U.S. Internet freedom policies. Just Foreign Policy. Wanted: Negotiating Text of Trans-Pacific Partnership. Reward Offered.

New Snowden slide reveals who the NSA's best friends really are. Just like anybody, the National Security Agency has its friends, and then its real friends. Defending your rights in the digital world. EFF: being forced to decrypt your files violates the Fifth. Trailblazer Project. Trailblazer was a United States National Security Agency (NSA) program intended to develop a capability to analyze data carried on communications networks like the Internet. It was intended to track entities using communication methods such as cell phones and e-mail.[1][2] It ran over budget, failed to accomplish critical goals, and was cancelled.

The people who filed the IG complaint were later raided by armed Federal Bureau of Investigation (FBI) agents. Inside Big Safari, the Air Force’s Top Secret Intel Unit. Congress introduces USA Freedom Act to limit NSA's domestic phone spying. The bill regarded as standing the best chance of actually curtailing the National Security Agency's domestic spying activities in the near future was introduced into Congress Tuesday. The USA Freedom Act—an acronym for the slightly more cumbersome “Uniting and Strengthening America by Fulfilling Rights and Ending Eavesdropping, Dragnet Collection, and Online Monitoring Act"—was jointly introduced into the House and Senate Tuesday, respectively by Congressman Jim Sensenbrenner (R-Wis.) and senator Patrick Leahy (D-Vt.). Most notably, the bill would stop the NSA’s from collecting and storing phone practically all American call records, a practice unknown before former agency contractor Edward Snowden leaked evidence of its existence, and now openly admitted by the U.S.

NSA spying 4chan. Say hello to men who hate NSA spying but blame women for being spied on. Over the weekend someone released hundreds of revealing photos of celebrities that appear to have been stolen from private storage. City Hall Protesters Demand "Drone-Free LAPD" A boisterous group of protesters went to Los Angeles City Hall Thursday, trying to shoot down the LAPD drone program before it gets off the ground. A similar fate befell the Seattle Police Department, which offered the drones to LAPD. Gordon Tokumatsu reports from downtown LA for the NBC4 News at 6 p.m. on Thursday, August 21, 2014.

Protesters gathered outside LA's city hall Thursday morning, chanting "drone-free LAPD" to demand a halt to what they called an LAPD plan to use drones to spy on citizens. How to Ditch Big Brother and Disappear Forever. VPN Provider Shuts Down After Lavabit Case Undermines Security. A VPN provider says that concerns it may be forced to hand over its encryption keys to United States authorities have led it to take the decision to shut down its consumer services. CryptoSeal says that information revealed as part of the Lavabit case has undermined its original understanding of United States law and made its position untenable. Politicians, press dodge crucial debate on surveillance.

The White House Has Been Covering Up the Presidency's Role in Torture for Years. Massachusetts SWAT teams claim they’re private corporations, immune from open records laws. Heathrow and Manchester issue must-be-charged gadget advice. The Snowden files: why the British public should be worried about GCHQ. Attacking Tor: how the NSA targets users' online anonymity. NSA and GCHQ target Tor network that protects anonymity of web users.