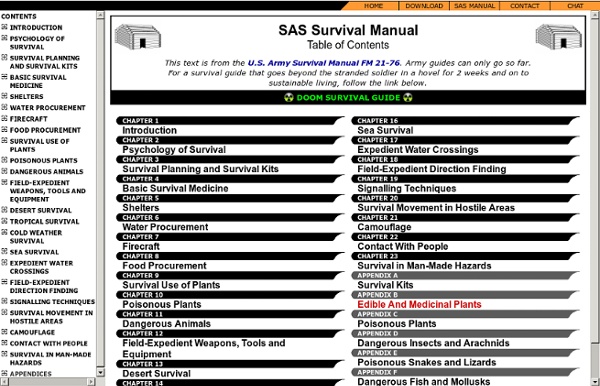 Interview: What's it really like to build your own tiny house and live in it? - Images We cover a lot of tiny houses here at New Atlas, but what's it actually like to build your own and live in it, day to day. Read on as we chat with the creators of the Shedsistence tiny house, Robert and Samantha Garlow, for an insider's take on the pros and cons of embracing the tiny house lifestyle. The Garlows recently completed their Shedsistence tiny house, a towable home on wheels measuring 24 x 8.6 x 13.5 ft (7.3 x 2.6 x 4 m) and weighing in at 9,930 lb (4,504 kg). Inside, there's a total of 204 sq ft (18.9 sq m) of floorspace, though the usable living space is less as they installed an externally-accessed gear room to house all their camping, kayaking, and related outdoors equipment. The pair built Shedsistence themselves on a low budget.

14 natural items for your alternative first aid kit Cloves. Photo by Elenadan Find out which multitasking natural remedies merit a spot in your backpack. IF YOU’VE COME TO trust in herbal and alternative medicine at home, it can be a hard decision to go back to Pepto-Bismol and Dayquil when you’re getting ready to go abroad. With these 14 items it’s easy to keep up that alternative health kick you’ve been on, even when you’re 5000 miles from home. Survival Food – 56 food supplies from the store When disaster strikes, there’s a pretty good chance your local grocery stores are going to be stripped bare in a matter of hours. From panicked people trying to stock up on last minute supplies, to those who failed to prepare for even short-term disasters and now find themselves facing the prospect of starving, your local grocery store is going to look like a battleground in a post-apocalyptic movie. Most grocery stores have a maximum 3 day supply of goods on hand before they run dry. That means even short-term disasters like hurricanes, floods and earthquakes can cause supply chain problems that will quickly wipe out their inventory.

BMW R1200 R Digimoto Motorcycle Concept In an attempt to bridge the gap between virtual and actual reality, industrial designer Christian Zanzotti, GRAYDEV, and Wunderlich worked together to design and prototype a custom BMW R1200 R in virtual reality. Sounds a bit strange we know, but taking a closer look at the specs of this bike display not only a knowledge of custom bike outfitting but a well-ascribed assumption of where concept development is soon heading. Known as the Digimoto, the concept features a BMW Boxer Engine held within the modified R1200R frame. It sits atop aluminum-milled wheels wrapped within a set of standard racing tires and includes a hand-welded aluminum tank, a laser-cut rubber racing seat, and a Makrolon brake light. The concept also puts sensors and cameras on the motorcycle that record any information around the bike. The accrued data is then translated into rider-legible information, displaying it onto the visor of the paired helmet.

Survival Gear & Bug Out Bags A Bug out bag is basically a large survival kit that’s filled with everything you need to survive after a disaster. A Bug Out Bag allows you quickly grab what you need should you be forced to evacuate during a disaster. Most experts suggest that your BOB should contain enough supplies to last for at least seventy-two hours. Since most major disasters often disrupt services and normal life for longer than 72 hours, we think it is a good idea to have a Bag that will allow you survive for an indefinite period of time.

GammaPix Lite The GammaPix(TM) Lite App, developed initially for several federal agencies, turns your phone into a detector of ionizing radiation. This isn't one of those fake Geiger counters. The GammaPix technology has been successfully tested at independent labs with calibrated sources. It was developed with support from the U.S. Department of Defense, the Domestic Nuclear Detection Office (U.S. Department of Homeland Security), and the Transportation Research Board (U.S. FM 23-10 Chptr 8 Tracking/Countertracking When a sniper follows a trail, he builds a picture of the enemy in his mind by asking himself questions: How many persons am I following? What is their state of training? How are they equipped? Are they healthy? What is their state of morale? Do they know they are being followed?

How to Make Your Own Toothpaste, Tooth Powder, Beat Gum Disease Now, Right at Home So, you want to make your own toothpaste or tooth powder, eh? Well, we have quite a few recipes here and on a few other pages... First, let me tell you that this site is about oral health and how you can preserve your good teeth by learning the truth about tooth decay, diet and nutrition, the oral biology and so forth. You can also learn about decayed teeth, sore or bleeding gums, the consequences of tooth and gum diseases and how the body fights disease and what you can do to help out.

Disclosure — ETI The history of Disclosure of extraterrestrial activity on Earth goes back eons, with countless eye-witness accounts of sightings and experiences all over the Earth. The peaceful nonviolent Phoenix Lights event on March 13, 1997 orchestrated by our ETI from the contiguous universe over the state of Arizona in the US, opened up the door even wider to Disclosure. We see there are at least 24 countries which have disclosed and released their former Top Secret files, including recently the United States in a limited capacity.

Bug Out Bag – The 7 Types of Gear You Must Have to Survive Bug Out Bag For someone new to being a Survivalist building your first Bug Out Bag can seem like a big task. Everybody you read about has been tweaking theirs for months or even years and has a pile of gear built up.