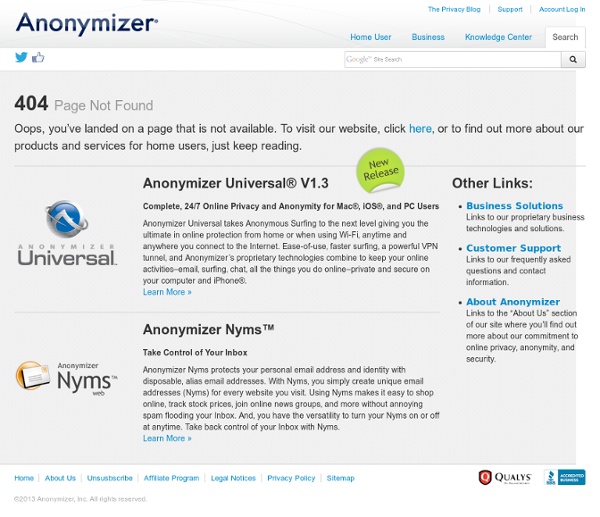 Ghostery Anonymouse.org AnonWWW Many mice surf the web under the illusion that their actions are private and anonymous. Unfortunately, this is not the way it is. Every time you visit a site for a piece of cheese, you leave a calling card that reveals where you are coming from, what kind of computer you use, and other details. Adverts Members | Terms of Service | Privacy Policy | Help / FAQ | Contact Info

Providers of personal VPN services for online privacy, data security, and unblocking Facebook, Twitter, and Skype where censored. JAP -- ANONYMITY & PRIVACY [ English | German ] Protection of Privacy on the Internet JAP (called JonDo in the scope of the commercial JonDonym anonymous proxy servers - AN.ON remains free of charge) makes it possible to surf the internet anonymously and unobservably. Without Anonymization, every computer in the internet communicates using a traceable Address. the website visited, the internet service provider (ISP), and any eavesdropper on the internet connection can determine which websites the user of a specific computer visits. How it works Instead of connecting directly to a webserver, users take a detour, connecting with encryption through several intermediaries, so-called Mixes. Since many users use these intermediaries at the same time, the internet connection of any one single user is hidden among the connections of all the other users. Outages and maintenance times Because JAP is a research project, it is continuously being further developed. Support requests WWW:

Episode 42- Recognizably Anonymous (Press Play... Anonymous is not group. It is not an organization. Rob Walker describes Anonymous as a “loosely affiliated and ever-changing band of individuals who… have been variously described as hackers, hacktivists, free-expression zealots, Internet troublemakers, and assorted combinations thereof.” But when Anonymous came up against the Church of Scientiology, a small, non-hierarchical collection of Anons decided to take the disparate phrases, images and ideas circling around the 4Chan.org /b/ message board (where Anonymous has its roots) and combine them into a very engaging and effective “brand identity” (For lack of a better word. The over-the-top, ominous voice of Anonymous was established in an online video and manifesto directed at the Church of Scientology: The Anonymous logo is comprised of a headless man in a suit, with a question mark where the head should be, juxtaposed against a UN flag. And then there’s the mask.

Guy Fawkes Mask: How Anonymous hacker group created a powerful visual brand Anonymous logo from parasearcher.blogspot.com. The loosely affiliated and ever-changing band of individuals who call themselves Anonymous have been variously described as hackers, hacktivists, free-expression zealots, Internet troublemakers, and assorted combinations thereof. By all accounts the group has no clear hierarchy or leadership, or even any internal agreement about what exactly it is. Anonymous traces its roots to the infamous /b/ message board on 4Chan.org. That said, some of the images and phrases now associated with the group were clearly circulating on 4Chan by 2007, when a rather sensational local Fox News report depicted Anonymous as “a hacker gang,” and offered a scary assessment of wanton Internet cruelty and destruction. Those elements really coalesced in early 2008, when some “Anons,” evidently incensed by the Church of Scientology’s efforts to keep an embarrassing Tom Cruise video off the Internet, began congregating via Internet Relay Chat to organize a response.

Home: PICOS PICOS - Privacy and Identity Management for Community Services Who we are Privacy and Identity Management for Community Services (PICOS) is an international research project, focused on mobile communities. The PICOS consortium consists of eleven partners from seven different countries, supported by the EU as a part of the Trust & Security Group within the 7th Research Framework Programm. It contains specialists from the fields of science, research and industry. Our Motivation Online communities connect millions of people around the world, to communicate, interact and share interests. Our Mission PICOS has the mission to investigate mobile communities and their services. Start to learn more about PICOS here.

Chinese Gold Farmers in the Game World {*style:<b><b><b><b>Chinese Gold Farmers in the Game World </b> by Ge Jin </b></b></b>*}University of California, San Diego jingejinge@gmail.com In China, there is a new kind of factory that hires young people to play online games like World of Warcraft and Lineage day and night. The gaming workers produce in-game currency, equipment, magic spells and even whole characters, which are sold to players from the US, Europe, South Korea and Japan etc. who want to raise their level in the game world immediately. China is currently the world factory of virtual commodities. This industry has developed to such a level that the Chinese government is looking for ways to tax and regulate it. The largest international brokers of virtual commodities are websites like IGE.com and Virdaq.com. Typically, the large-scale gold farms provide meals and dorms so that the farmers live in the farm and work on a 12-hour shift with short breaks. Most of the gold farmers I talked to love the job.