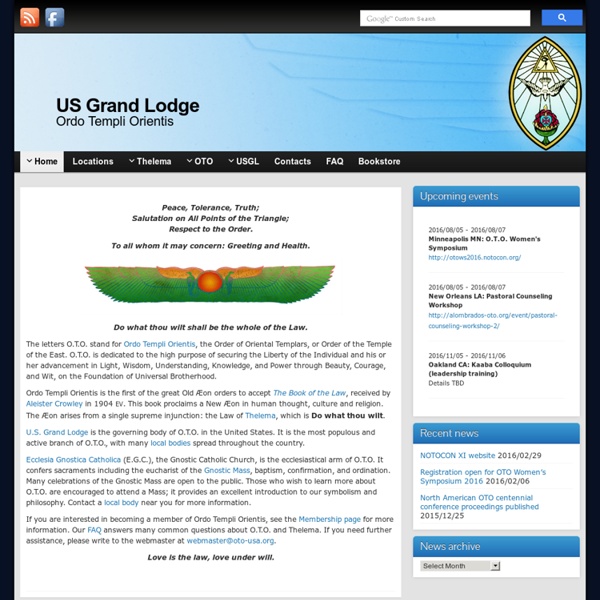 Peace, Tolerance, Truth; Salutation on All Points of the Triangle; Respect to the Order. To all whom it may concern: Greeting and Health. Do what thou wilt shall be the whole of the Law. The letters O.T.O. stand for Ordo Templi Orientis, the Order of Oriental Templars, or Order of the Temple of the East. O.T.O. is dedicated to the high purpose of securing the Liberty of the Individual and his or her advancement in Light, Wisdom, Understanding, Knowledge, and Power through Beauty, Courage, and Wit, on the Foundation of Universal Brotherhood. Ordo Templi Orientis is the first of the great Old Æon orders to accept The Book of the Law, received by Aleister Crowley in 1904 EV.

Secret Societies Index: Hard Truth / Wake Up America Secret Societies "The great strength of our Order lies in its concealment; let it never appear in any place in its own name, but always concealed by another name, and another occupation. None is fitter than the lower degrees of Freemasonry; the public is accustomed to it, expects little from it, and therefore takes little notice of it. Next to this, the form of a learned or literary society is best suited to our purpose, and had Freemasonry not existed, this cover would have been employed; and it may be much more than a cover, it may be a powerful engine in our hands... HyperPhysics Concepts About HyperPhysics Rationale for Development HyperPhysics is an exploration environment for concepts in physics which employs concept maps and other linking strategies to facilitate smooth navigation.

LEMEGETON, Part 1;2: Goetia The 9th spirit in order is Paimon; a great king, & very Obedient to Lucifer, he appeareth in ye forme of a man, sitting one a dromedary, wh a Crowne most glorious on his head. Three [There] goeth before him a host of spirits like men with Trumpets and well sounding Cymballs, and all other sorts of musicall Instruments &c. he hath a great voice, and roareth at his first comming, and his speech [voice] is such as ye Magician cannot well understand, unless he compelleth him. [102r] The 10th spirit is Buer, a great president and appereth in that is his shape when ye is there, he teacheth Phylosophy [both] Morall & Naturall, & ye Logicall arts, & ye vertues of all hearbes & plants, & healeth all distempers in Man, & giveth (familiars) good familiars, he governeth over 50 Legions of spirits and this is his seale of obediance wch you must weare when you call him to apperance.

Brotherhood of the Bell by William Dean Ross by William Dean Ross The majority of people worldwide do not know what the terms Black Operations and Black Sciences mean or how they are used. Black Operations were developed after World War I; but, really flourished after World War II during the Cold War. Congress allocated money to the Pentagon, the CIA and other Defense Department sectors to make the United States military as strong as possible, but certain projects became more secret than others did. The more secret projects were funded by the civilian sector at first - such as "pet peeve" defense contractors already in the loop.

Apply for an Employer Identification Number (EIN) Online Español Hours of operation: Monday through Friday 7:00 a.m. to 10:00 p.m. Eastern Time Important Donmeh West - The Mystery of the Middle Column ByReb Yakov Leib HaKohain, Founder & Spiritual Director DONMEH WEST In many of my lectures, I refer to the "Three Columns" or "Pillars" of the Ten Sefiroth -- Left, Right and Middle -- as they are described in the Zohar and other works of Jewish Kabbalah: One of the mysteries of the Center Column that I have already pointed out several times (and which seems to have been picked up by other "Kabbalists", incidentally) is that the sum of the numerical values of the four Sefiroth of the Center Column -- Keter (1), Tiferet (6), Yesod (9) and Malkuth (10) -- is 26, which is exactly the Gematria (or numerical sum) of the four Hebrew letters forming the Tetragrammaton, Yahweh: <------ Yahweh

Thule Society Thule Society (aka Brotherhood Of Death Society) In past programs, we have stated that the New World Order could not have been realized had it not been for the intense activities of various secret societies throughout the world. Exempt Organizations Forms and Instructions 1This column indicates the revision date of forms currently being accepted by the Exempt Organizations Determinations office. Outdated forms will be returned without any action by the Service on the request. 2Because Form 8871 must be filed electronically, a paper version of Form 8871 may not be filed and is not available for download. The freely available Adobe Acrobat Reader software is required to view, print, and search the items listed above.

Mind Control: How to Read Minds KEVIN HOGAN We scientifically tested and re-tested about 30 brand new and some old experiments of mind control and persuasion at Influence: Boot Camp.. Many of the tests and experiments we did are based upon mentalism illusions I often use to open up a presentation. They captivate immediately. List of occultists - Wikipedia Notable people, whether contemporary, historical or legendary, who are or were involved in any of the following practices and traditions: Classical mythology[edit] Cassandra, oracle[1]Circe, legendary sorceress[2]Hecate, goddess of witchcraft[3]Medea, often identified with Angitia, she had fled to Italy in her dragon chariot[4]Melampus, soothsayer and magician[5]Semiramis, semi-legendary queen and sorceress.[6]Vegoia, legendary inventor of Etruscan divination[7] Africa[edit]

Takeover of the World: The Fabian Society Walter Lippmann –Influential American award-winning writer, journalist, and political commentator.Recipient of the Pulitzer Prize in 1958 and 1962Appeared to be anti-CommunismLater became a leading public advocate of the need to respect a Soviet sphere of influence in EuropeAboutThe British Fabian Society plan to takeover the world by the City of London financial community was first published in a book entitled All These Things by a New Zealand author and journalist, A. N. Field.