21 Goals of the Illuminati and The Committee of 300 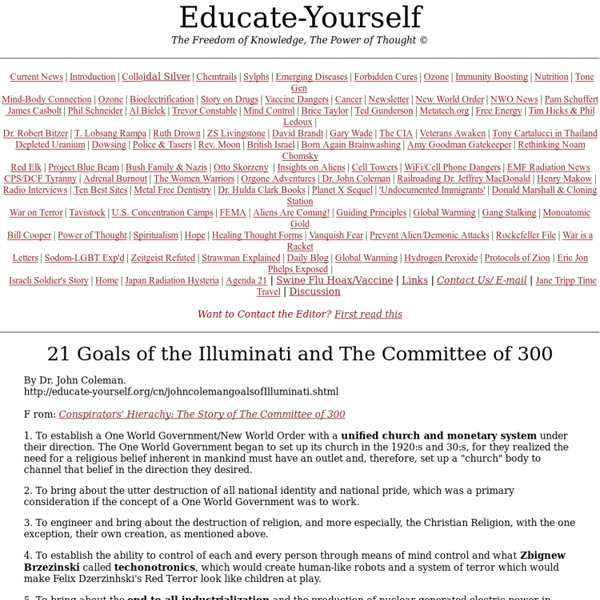 Kevin Annett Exposes Dark Secrets of the Vatican and Its Churches Image credit: www.flickr.com/photos/tejvan/5705851139 Many people don’t realize that the Vatican and its affiliated churches are committing crimes against humanity by financing and supporting child trafficking, wars and genocide. The reason why you don’t hear about these dark secrets of the Vatican in the Western mainstream media is because most Western media outlets are owned and controlled by the New World Order (NWO). The NWO is a secret organization made of secret societies and controlling groups of people that have one thing in common; to establish a one world government to control and enslave the people of the world. Did you know the Vatican is a corporation? Most people don’t realize that Vatican City, which is located in Rome, is a sovereign country within Italy. According to the first video in this article, in 2013, Catholic churches in the United States alone made about 170 billion dollars in revenue. In the open, the Vatican portrays itself as a “holy” religious institution.

The Greatest Hoax | Serge Monast - Project Blue Beam transcript Home | Issues | Perspective | Audio | Guests | Images | Live Chat | Links | Search | About | Contact Following is the transcript of a taped presentation by Serge Monast, a French-speaking Canadian journalist. Although there was no date on the tape, Monast speaks of 1983 as "eleven years ago", so we will assume this talk took place in 1994. We heard rumors from time to time of harassment against Mr. Monast, and later had heard that he was killed. That is an unconfirmed (by us) report. Because the tape from which we transcribed was not of high quality, and along with the very heavy French accent, we were unable to make out some of the words. I've decided to transcribe this tape because the information relates to events occurring today. He also indicated during the presentation that the planners had originally set the date for 1983. he was a former secret courier for the National Security Agency; the 'official position of the U.S. Off the subject, yet not. . . -- Jackie For what? Alice A.

Illuminati News: How to Fight the New World Order, by Wes Penre How to Fight the New World Order by Wes Penre, Jan 24, 2005 The main reason that I put this web site on the World Wide Web was to show you what the 'reality' we live in is really like, behind all lies, illusions, rumors and ignorance. To have this knowledge is the first step in fighting the New World Order [def]. The reality we live in is commonly called the "3rd dimension" or "3rd density", both terms used by me on this website interchangeably. We are around 6 billion souls with bodies on this planet, and most of us have no clue what is going on around us, only because we have let ignorance substitute knowledge. In a reality where good and evil exist, we would like to find a balance between the two, and to expand spiritually, we need to tip over towards the positive side. We create our own reality by free choice; it doesn't matter how many people tell me otherwise, it is very self evident. "Alpha Draco". Almost every second of the day we make choices. So, what about religion?

Deprogrammer Interview with Marion Knox: In the House of the Strongman, Sodomy is the Key - by Elana Freeland Interviewing Deprogrammers: In the House of the Strong ManSodomy is the Key Interview with Marion Knoxby Elana Freeland The doctors of the law, too, who had come down from Jerusalem, said, ‘He is possessed by Beelzebub’ and ‘He drives out devils by the prince of devils.’ So he called them to come forward, and spoke to them in parables: ‘How can Satan drive out Satan? ‘On the other hand, no one can break into a strong man’s house and make off with his goods unless he has first tied the strong man up; then he can ransack the house.’ Marion Knox is a farmer in Lebanon, Oregon who more and more is called upon to do the work of deliverance, not deprogramming. E: Marion, where I want to start is with your statement that the presence of Elohim spirits usually indicate Freemasonic programming that is installed by sodomy. M: Yes, it does, and I would like to broaden that a little bit. E: What is it about sodomy that does that? E: For all multiple personality disorders? M: As far as I know. M: Yes.

Illumination: the Secret Religion - The Waste Land Top 10 Things You Shouldn’t Know About The Ubiquitous “Illuminati” Warning: The following information is not suitable for anyone who would like to remain blind. At the same time this article is especially not for anyone that is certain they “know it all.” If you plan on having the “answers” handed to you, then please hit the back button… there’s nothing here for you. Moving forward, everything listed below is meant to only lightly touch upon each topic and requires further research on the reader’s behalf to really “know the truth,” instead of just believing what one source has to say. If you’re ready to take the red pill now, then let’s explore together exactly how deep this rabbit hole goes… (update: to see what people are doing after reading this, please check out the poll on the bottom of this post) 10. Food for thought: Why can most people tell you more about their favorite celebrities than the people they interact with on a daily basis? Instead of asking why is this symbolism being constantly repeated? 9. It gets even weirder than the image above.

Knights Templar and Freemasonry I made this article NOT to promote freemasonry i put it together to expose Freemasonry and to show to people what it really is. The Knights Templar were the elite fighting force of their day, highly trained, well-equipped and highly motivated; one of the tenets of their religious order was that they were forbidden from retreating in battle, unless outnumbered three to one, and even then only by order of their commander, or if the Templar flag went down. Not all Knights Templar were warriors. The mission of most of the members was one of support – to acquire resources which could be used to fund and equip the small percentage of members who were fighting on the front lines. Because of this infrastructure, the warriors were well-trained and very well armed. The Templars were also shrewd tacticians, following the dream of Saint Bernard who had declared that a small force, under the right conditions, could defeat a much larger enemy. Degrees There are three initial degrees of Freemasonry:

The New World Order – Part 1 The New World Order – Part 1 Never in human history has this wonderful planet and its inhabitants been subjected to such an evil satanic regime !! Never since its creation has an organisation create so much damage to its environment, government, people, finances and it industrial base and kept us all at war chasing non existent terrorists!! The Logo of the New World Order Some of its infrastructure You may be shocked to learn that much of the original British Empire is still under their total control In order to start this rather complex series of articles one has to turn back the clock and look at an act of treason that took place in England and as a direct result launched the foundation blocks of today’s New World Order. We are being taken down a road of “Political Spin” and “Weapons of Mass Deception” by those under the control of the New World Order (NWO) that exist in almost every political sector in every country. Two voyages in the 1490s lay the foundations for the future empires.