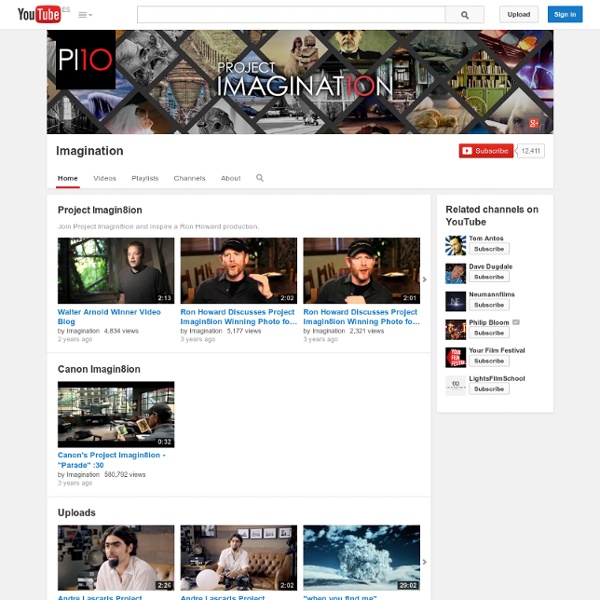 A Father Who Creatively Captures His Kids (20 photos) If there was a prize that could be given out to the most creative father, I'd hope that it was awarded to Jason Lee. A wedding photographer by day, he's used to capturing some of the most important moments in a couple's lives. As a longtime fan of Jason's photos on Flickr however, I think the real magic happens when he turns the camera onto his daughters. Sure, his children are adorably cute in their own right, but that's not what makes his photos so interesting. It's when he puts his own spin on their everyday moments that we not only get to experience our own childhood again, we're able to see a father's pride shine through. I was able to get in touch with Jason to ask him a few questions. Q: How did you get into photography? Q: How do you come up with such creative photos of your daughters? Q: How has being on Flickr helped you with your business? Q: Any inspirational stories you'd like to share? Q: Do you have any advice for aspiring photographers? Q: Any quotes you live by?

Abbott Square Open House | Santa Cruz Museum of Art ← Back to All Events, Art Events, Evening Events, Family Events, Free Events, History Events, Volunteer Opportunities Note: This event has passed. We are starting a process to transform Abbott Square into a center of creative activity Downtown. Our goal is two-fold: to create a welcoming, interactive space for families, and to create a platform for cultural activities, festivals, and art events downtown. We expect a revitalized Abbott Square to energize artists, increase retail activity, and draw County-wide residents Downtown for exciting family-friendly experiences. Interested in sharing your ideas for the future of Abbott Square? Calendar powered by The Events Calendar

iamamiwhoami Background[edit] Lee, seen performing here in 2008, developed iamamiwhoami with Björklund after the release of her second album in 2009. Since the upload of their first video to YouTube, the project's videos and music have been continuous and operate in "real time," and each song is completed just before being made available for viewing.[4] The first upload, "Prelude 699130082.451322" surfaced on YouTube in December 2009 and was the beginning of a since abstract storyline. Lee has said of this process "every time a production starts, it’s being released very soon after to keep the conversation with the audience in the present. It’s a chronological storyline of an evolution, from the very beginning up to now. I think the Internet is the place where you can do that iamamiwhoami is widely known for its secrecy.[2][4][6][8][9] As such, Lee's participation was not confirmed until August 2011, where she began giving her first interviews regarding the project. History[edit] 2012–13: kin[edit]

Animated Short Movies » Life-Changing Arts Movie shorts, or short animations are a unique form of art, which can inspire and enlighten just like any other art form. Sometimes even more so. Here is a selection of inspiring, or for some reason animated short movies, here shown in their original full length. Thanks to all the visitors who have contributed with their detailed suggestions! That is why there are now two pages of great animated shorts! If you think there is a short animated movie that should be added, let us know which, and why. The below movies are not sorted in any particular order. French Toast Written and directed by Fabrice O. The Lady and the Reaper Written and directed by Javier Recio Gracia Get Out By Charlotte Boisson, Julien Fourvel, Pascal Han-Kwan, Tristan Reinarz and Fanny Roche Granny O'Grimm Directed by Nicky Phelan, produced by Brown Bag Films Oktapodi By Julien Bocabeille, Francois-Xavier Chanioux, Olivier Delabarre, Thierry Marchand, Quentin Marmier and Emud Mokhberi Big Buck Bunny Life Line Created by Tomek Ducki

honeybee137LK 48 Hours in Byron Bay | Locations “Stuff your eyes with wonder, live as if you’d drop dead in ten seconds.” – Ray Bradbury in Fahrenheit 451 And stuff my eyes I did. No sooner had I landed in Gold Coast in Queensland after a sleepless night on the plane, was I whisked off on a whirlwind tour of beautiful rivers teeming with fish, sandy beaches with perfect surfing conditions and lively farmers markets offering a feast for all senses – and a glimpse of the outdoor life that Byron Bay offers. Not your ordinary tour guideTaking an overnight flight only ever seems a good idea on paper and after hours of watching strangers in thongs sleep (that’s flip flops for all of you non-Australians in case you wondered about the state of travel attire in Oz) I arrived in my usual slightly detached and bleary-eyed “another day, another airport” condition. All that is gone and forgotten the moment I locate Ben: not only does he greet me bearing coffee (instant brownie points!) Enjoy the photos in the gallery above!

Arts 2.0: Examples of Arts Organizations Social Media Strategies The above slide show was created based on all the information I gathered from my network below. I'm prepping for a workshop on Social Media and wanted do a round up of recent compelling examples of arts organizations using social media strategies and tools. I've covered arts organizations and social media here and there over the past three years and last winter co-wrote a cover story article with Rebecca Krause-Hardie for ArtsReach. So, thought I'd take an opportunity to query my network via Twitter and Facebook and see what's new. I was particularly interested in examples using blogs, Twitter, Flickr, Youtube, and Facebook. Everyone is a Curator One of the best projects that illustrates the basic idea of Web2.0 - listening and conversation and stakeholders creating their own experience with your organization - comes from the Brooklyn Museum of Art. Here's how Nina Simon described it on her insightful post analyzing the tactics used. 1. More at TechCrunch and Technology in the Arts Blog.

17 Images You Won't Believe Aren't Photoshopped (Part 7) Salvador Dali's Melting Train Tracks These funhouse-mirror railroad tracks are a reminder that Mother Nature pretty much laughs at the things we build. What you're seeing is the aftermath of a recent earthquake in New Zealand. We feel sorry for those two guys in orange who apparently have been tasked with re-straightening the tracks with their bare hands. Hurry up, guys! The train will be here in 10 minutes! Hey, Pretty Impressive Mural! This would be an impressive feat even if this church was just a painting on the side of the cliff face. It's the Hermitage of St. So, yeah, good job to whoever hauled all those bricks up there. Spider Goat, Spider Goat ... While we're on the topic of amazing feats of Italians, we present the Alpine ibex, seen here casually scaling the Cingino Dam in Italy and openly defying all laws of physics. The only thing these goats give less of a shit about than gravity are the fences you build to try to keep them in. There's No Feeling Like Falling Into a Sinkhole

Hotel Art Curators Are a Growing Breed All that, and one helping hand a guest might not expect: a hotel curator. Hotels have been hanging fine art on their walls for decades now. commissioned a series of prints for what is considered the original boutique hotel, the Morgans, in 1984; the Roger Smith, a small property in Midtown Manhattan, transformed its lobby into an art gallery and performance space as part of a 1991 renovation. But few have gone so far as the James, which hired a young artist, Matthew Jensen, to select original artworks to adorn each of its 14 floors of guest rooms. Mr. “There’s all these empty walls and there are thousands of artists out there who are living in the city and have never had their art seen by anyone,” said Leah McCloskey, who places works by students at the Art Students League in restaurants and apartment and office buildings. For the James, meeting that demand has meant trying to reflect the artistic microclimate of SoHo. Mr. The pictures appealed to Mr. Mr.