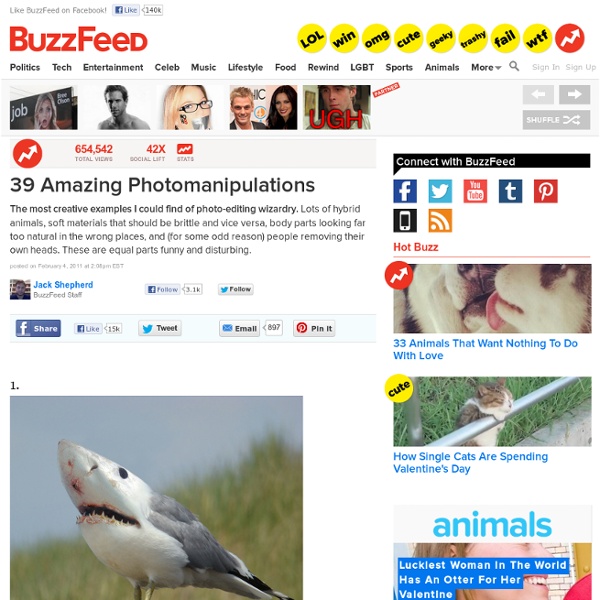 Unforgettable Photos 1957. The first day of Dorothy Counts at the Harry Harding High School in the United States. Counts was one of the first black students admitted in the school, and she was no longer able to stand the harassments after 4 days. January 12th, 1960. A second before the Japanese Socialist Party leader Asanuma was murdered by an opponent student. How To Learn Photoshop In 24 Hrs Quite a bold statement, Learn Photoshop in 24 hours. Its simple and you can. Stepping into Photoshop at first can be quite daunting, were do you start? A Father Who Creatively Captures His Kids (20 photos) If there was a prize that could be given out to the most creative father, I'd hope that it was awarded to Jason Lee. A wedding photographer by day, he's used to capturing some of the most important moments in a couple's lives. As a longtime fan of Jason's photos on Flickr however, I think the real magic happens when he turns the camera onto his daughters. Sure, his children are adorably cute in their own right, but that's not what makes his photos so interesting.

Some Bizzare and Odd things around us… Beauty of the nature lies in viewer’s eyes. A photograph is just a way to show or represent that beauty. Here is a bunch of some wonderful pictures which are not only the example of beautiful photography but are also a photograph of some miracles happening in the world. You can also call it the creativity and innovation of photographer’s mind. Actors in Character - Now That is Acting! Feb 21, 2011 / Category : Movies / 18 Comments There's no denying the fact that most of us have pretended to be actors. Photographer Howard Schatz, from Vanity Fair, took this idea one step further, place actors in a series of roles and dramatic situations to reveal the essence of their characters. Left: You're a priest in a hardscrabble factory-town parish, listening to your brother's son confess that he has killed a man.

Software Download This page features a growing set of free Adobe Photoshop® filters / plugins coded by myself for 3D production, 2D design, and technical research. These filters are only compatible with Windows, NOT Macintosh. This is not a developer decision but rather a compiler limitation. 64bit versions will be coming soon. While these filters were created primarily for Adobe Photoshop®, they also work with many free applications such Gimp, Pixoid, IrfanView, Ultimatepaint, Photo-Editor, and QFX LE. 17 Images You Won't Believe Aren't Photoshopped (Part 7) Salvador Dali's Melting Train Tracks These funhouse-mirror railroad tracks are a reminder that Mother Nature pretty much laughs at the things we build. What you're seeing is the aftermath of a recent earthquake in New Zealand. We feel sorry for those two guys in orange who apparently have been tasked with re-straightening the tracks with their bare hands. Hurry up, guys!

25 Breath Taking HD Nature Wallpapers by Humza / November 3, 2011 Here are some 25 really amazing nature, scenic wallpapers for your desktop. The amazing crisp, high definition resolution ensures that your desktop not only looks good but even ‘feels’ good! The artists (photographer) of these wallpapers is unknown. If you know who took the photographs, please let us know through email or comment. Shooting Strangers in Orchard Road When I’m out on the streets, I often encounter faces that make me look twice; faces that stand out in the crowd without trying; faces that are out of the ordinary. They range from the exquisitely beautiful to the strangely wonderful. I started to approach these strangers for permission to take a photo of them. Some said no, but most said yes.

Worth1000 Home Welcome fans of Worth1000.com. If you're looking for Worth's amazing creative content, then you've rocked up to the right place! Just in case you missed the news, Worth1000.com is now part of DesignCrowd.com - and we've preserved all the amazing Worth1000 content here so you can search the archives to find old favorites and new contest art. ~ KAI? ~ - Cheezburger.com Most Upvoted 2381 votes The Story of Capitalism 1200 votes Paraiso Urbano art show/ Paris2011 The "under construction" space held the group show. Main spcae where"Inti" had his first solo show in France. "Inmigrantes" Acrylic and spray paint on Plywood, by Cekis 2011 "I'm taking almost everything with me" Acrylic on canvas, by Cekis 2011 "L'utopia" and "Esperanza" by Cekis