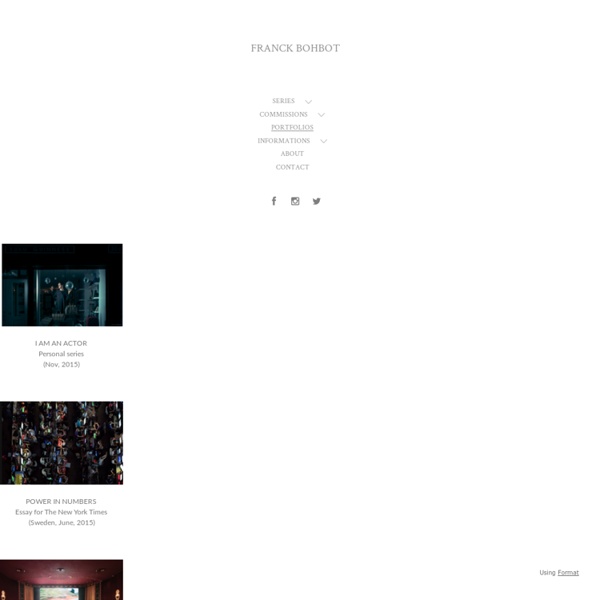 Info - Julien Douvier About me : My name is Julien Douvier, 24 years old, I studied graphic design in France along with editorial / print design and advertising design. I'm now a freelancer looking for projects opportunities. What tools do I use to create my animated photos ? I use most of the time a Canon 600D with various lenses, a tripod, Sony Vegas Pro and Adobe Photoshop. Silent World In the Silent World project, we wanted to study and transform our world’s most symbolic metropolises (New York, Beijing, Paris, Rome) into imaginary, fictional, impossible places. In our work, we always try to study and put into image the frontier between reality and the world of dreams. Our desire was to put the viewers into a puzzling and uncomfortable place, pushing him to put into question notions of time and space, but mostly our role and position towards the becoming of our world.

Chris Jordan - Intolerable Beauty Exploring around our country's shipping ports and industrial yards, where the accumulated detritus of our consumption is exposed to view like eroded layers in the Grand Canyon, I find evidence of a slow-motion apocalypse in progress. I am appalled by these scenes, and yet also drawn into them with awe and fascination. The immense scale of our consumption can appear desolate, macabre, oddly comical and ironic, and even darkly beautiful; for me its consistent feature is a staggering complexity. The pervasiveness of our consumerism holds a seductive kind of mob mentality. Collectively we are committing a vast and unsustainable act of taking, but we each are anonymous and no one is in charge or accountable for the consequences. I fear that in this process we are doing irreparable harm to our planet and to our individual spirits.

Gioberto Noro Where are we and where do the photos by Sergio Gioberto and Marilena Noro take us? The temporal dimension in these images seem irritating and coming from a distant, mysterious past, which activates our memory and at the same time brings us into a space that is waiting to be discovered. Their work comprise a number of dualities and ambiguities like light-shade, simple-complex and culture-nature and rational-irrational.

Lisson Gallery Jason Martin effects oscillations between sculpture and painting, with the vigour of action painting but a controlled hand. He is perhaps best known for his monochromatic paintings, where layers of oil or acrylic gel are dragged across hard surfaces such as aluminium, stainless steel or Plexiglas with a fine, comb-like piece of metal or board in one movement, often repeated many times. Striations catch the light, their rhythmic textures suggestive of the ridges in a vinyl record, strands of wet hair, the grain of a feather – and whose titles flirt with association (Comrade, Amphibian, Corinthian).