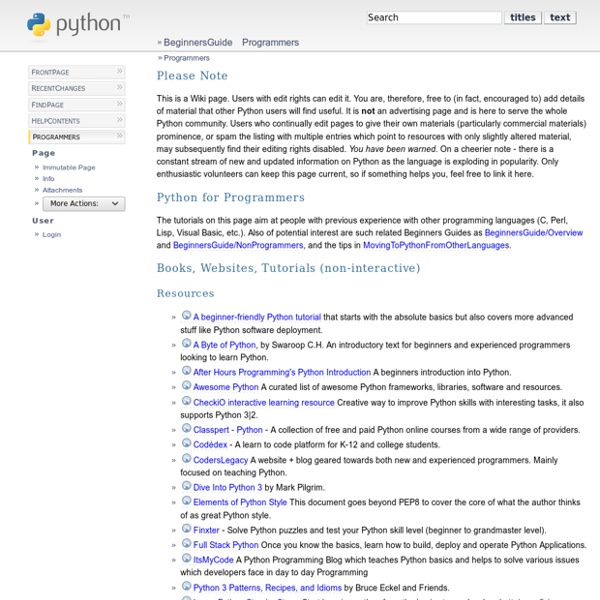 Please Note This is a Wiki page. Users with edit rights can edit it. You are therefore free to (in fact, encouraged to) add details of material that other Python users will find useful. It is not an advertising page and is here to serve the whole Python community. Users who continually edit pages to give their own materials (particularly commercial materials) prominence, or spam the listing with multiple entries which point to resources with only slightly altered material, may subsequently find their editing rights disabled. Python for Programmers The tutorials on this page are aimed at people who have previous experience with other programming languages (C, Perl, Lisp, Visual Basic, etc.). Books, Websites, Tutorials (non-interactive) Resources A beginner-friendly Python tutorial that starts with the absolute basics, but also covers more advanced stuff like Python software deployment. Interactive Tools and Lessons Python Video Tutorials Python video tutorial (commercial/paid)

Visualiser of Python Execution Write your Python code here: x = [1, 2, 3] y = [4, 5, 6] z = y Python Course Uta Priss This is a generic version of a class "Computer Programming for Information Management" that I taught twice a year at the School of Library and Information Science, Indiana University Bloomington. The materials in this course are mostly self-explanatory and can be used for self study. (There are some references in the materials to Indiana University accounts and settings which should be ignored.) Notes: 1) The materials in this course are copyrighted. 2) Please only contact me in case you find errors in the text or have comments.

Instant Python This is a minimal crash-course in the programming language Python. To learn more, take a look at the documentation at the Python web site, www.python.org; especially the tutorial. If you wonder why you should be interested, check out the comparison page where Python is compared to other languages. This introduction has been translated into several languages, among them Portuguese, Italian, Spanish, Russian, French, Lithuanian, Japanese, German and Greek, and is currently being translated into Norwegian, Polish, and Korean. Since this document still might undergo changes, these translations may not always be up to date. Style Guide for Python Code Code should be written in a way that does not disadvantage other implementations of Python (PyPy, Jython, IronPython, Cython, Psyco, and such).For example, do not rely on CPython's efficient implementation of in-place string concatenation for statements in the form a += b or a = a + b. This optimization is fragile even in CPython (it only works for some types) and isn't present at all in implementations that don't use refcounting. In performance sensitive parts of the library, the ''.join() form should be used instead. This will ensure that concatenation occurs in linear time across various implementations.Comparisons to singletons like None should always be done with is or is not, never the equality operators.Also, beware of writing if x when you really mean if x is not None -- e.g. when testing whether a variable or argument that defaults to None was set to some other value.

Tutorial - py2exe.org py2exe turns Python programs into packages that can be run on other Windows computers without needing to install Python on those computers. You must run py2exe on a Windows computer. Python is needed on the computer where py2exe itself is run because py2exe is a Python program and it includes parts of Python in the package that is built. To successfully complete this tutorial you'll need to know the basics of Python (you can get started at python.org's getting started page). The Python Tutorial — Python v2.7.1 documentation Python is an easy to learn, powerful programming language. It has efficient high-level data structures and a simple but effective approach to object-oriented programming. Python’s elegant syntax and dynamic typing, together with its interpreted nature, make it an ideal language for scripting and rapid application development in many areas on most platforms.

TkInter Tkinter is Python's de-facto standard GUI (Graphical User Interface) package. It is a thin object-oriented layer on top of Tcl/Tk. Tkinter is not the only GuiProgramming toolkit for Python. It is however the most commonly used one. CameronLaird calls the yearly decision to keep TkInter "one of the minor traditions of the Python world." The Tkinter wiki: 10 Free Python Programming Books Below is a collection of 10 great Python programming books that are available online in full, completely free of charge: Dive into Python This is a fantastic book that is also available in print

A simple IRC BOT written in Python - This article shows you how to make a simple IRC bot in python. First question: why the hell not eggdrop? Answer: I don't know TCL, and I like to customize my scripts; plus it's a heavy program, and I hardly need 1% of the features it provides. I have been using python for a few months now and absoulutely love it. Creating bots in python is quite a simple job really. So lets start making it. Importing the libraries: