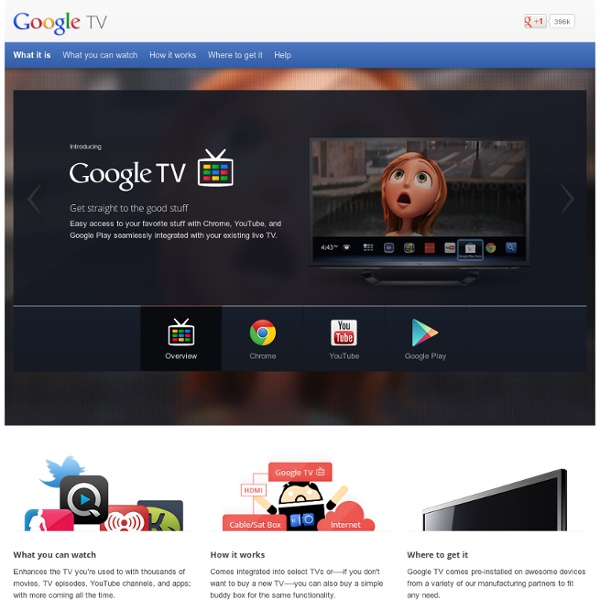 New Updates to YouTube for Google TV In the next few days we’re releasing an update to your YouTube experience on Google TV making it faster and easier to find great content, adding YouTube channel pages, and giving you more control over your experience.You’ll be able to update your app through Android Market, and you’ll see some big improvements. First you’ll notice the app works faster with smoother navigation for a better experience. Next, we’ve added a new feature called Discover, which lets you browse YouTube channels by categories. Whether you’re looking for hilarious comedy, delectable cooking content, or the latest news, you can find great channels for any of your interests. Heimdall What is Heimdall? Heimdall is a cross-platform open-source tool suite used to flash firmware (aka ROMs) onto Samsung mobile devices. How does it work? Heimdall connects to a mobile device over USB and interact with software running on device known as Loke.

Maintenance Koch Spy Agency Led by Voter Fraud Huckster The Kochs have been complaining about a "lack of civility in politics" as they seek to boost their public image--but one of their top operatives helped propel perhaps the most egregious case of race-baiting voter fraud hucksterism in recent years. At the same time that the Kochs have been on a PR blitz, publicly spinning an image of themselves as well-intentioned patriots trying to make the world a better place and decrying "character assassination," they've been quietly ramping up a clandestine surveillance and intelligence gathering operation focused on their perceived political enemies, Ken Vogel reports at Politico. At the helm of this "competitive intelligence" operation is a man named Mike Roman, Vice President of Research for Kochs' Freedom Partners and who was paid $265,000 last year, according to Freedom Partners' recent tax filing. Read the rest of this item here. Wisconsinites Reject the "Eric O'Keefe Session" of the Legislature

Play ‘Stunningly brilliant... Full of more twists and turns than the best ever rollercoaster, with an epic ending’ NetGalley review ⭐⭐⭐⭐⭐ When six-year-old Marcus is taken from outside his house on Halloween it shakes his quiet neighbourhood to the core. =Everyone was ready for a night of trick-or-treating. Now the unthinkable has happened. GNU/Linux Timeline After a short essay on methodology we’re curious to find out whether there are any master-snoops among our audience. We present exhibit M, a rare specimen we know nothing about but for the fact that it was compiled from bits of Gentoo. Hence we call publicly for any hints or leads regarding this elusive distribution! Meanwhile, a gentle reader has drawn to our attention the fact that Damn Vulnerable Linux is currently listed as a Slax derivate by the major pundit places, while it certainly boasted a Damn Small Linux pedigree in it’s very beginnings. The switch has happened, but everyone claims not to have seen when it did!

Apps Marketplace Sign in MoreEven more from Google Navigation Menu Google Tools in einer Übersicht This list of Google services – Google Tools, Toogles or Toogls - will be probably never complete. The search engine monopoly Yes constantly screwing on new features, Apps and products. And especially in the vertical range of ever new sources of revenue. SHR Project What is SHR ? SHR is a GNU/Linux based operating system for smartphones and similar mobile devices. It integrates various Free and Open Source Software projects into a versatile platform - flexible enough to run on a vast selection of mobile hardware such as the Openmoko Neo Freerunner, Goldelico OpenPhoenux (GTA04), Nokia N900 and more. Reviews of Google Products and Services Read reviews of Google products and services. Google Product SearchAlthough you can often find products directly from the main Google search engine, you can't sort those products by price or separate the stores from Web sites that just talk about the product. Google Product Search is Google's shopping search engine. It was formerly known as Froogle.

iwiDarwin iwi_darwin was ported from Linux drivers made by Intel®. This code includes derivations from the BSD and Linux drivers and is therefore licensed under GPL2. Donations should be done in mercurysquad project List of Google products Web-based products[edit] Search tools[edit] Advertising services[edit] Communication and publishing tools[edit] Development tools[edit] Security tools[edit]

web-toolkit - Google Web Toolkit (GWT) To browse the GWT source code, visit the 'Source' tab. If you have isolated a problem or want a new feature to be included in the GWT, please submit an issue. Make sure to include all the relevant information when you submit the issue such as: GWT version Browsers used (with version number) One line of issue summary and a detailed description And any workarounds if you have them. The more information you provide, the quicker the issue can be verified and prioritized.