About 4Ps: Program and Beneficiaries 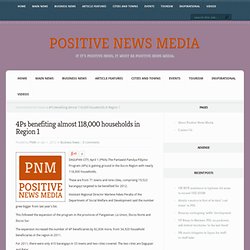 These are from 71 towns and nine cities, comprising 19,522 barangays targeted to be benefited for 2012. FS_on_Gender_March_2012. Queing for the 4Ps cash: 7 a.m. to 7 p.m. KIDAPAWANCITY (March 26/Sunday) – Some 5,000 additional beneficiaries of the Pantawid Pamilyang Pilipino Programb(4Ps), a poverty reduction strategy implemented by the Department of Social Welfare and Development (DSWD), waited in line outside a government bank here from 7 a.m. to 7 p.m. to withdraw their cash grant. 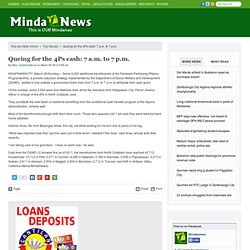 Of this number, some 2,500 were from Makilala town while the rest were from Kidapawan City, Precel Jimena, officer in-charge of the 4Ps in North Cotabato, said. 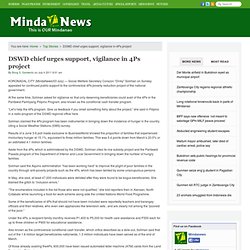 At the same time, Soliman asked for vigilance so that only deserving beneficiaries could avail of the 4Ps or the Pantawid Pamilyang Pilipino Program, also known as the conditional cash transfer program. “Let’s help the 4Ps program. Give us feedback if you smell something fishy about the project,” she said in Filipino in a radio program of the DSWD regional office here. Soliman claimed the 4Ps program has been instrumental in bringing down the incidence of hunger in the country, citing a Social Weather Stations (SWS) survey. Results of a June 3-6 poll made exclusive to BusinessWorld showed the proportion of families that experienced involuntary hunger at 15.1%, equivalent to three million families. 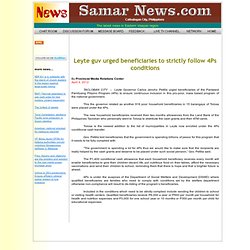 The 4Ps Program: A Jump start to a Better Future. The Pantawid Pamilyang Pilipino Program (4Ps) is a poverty reduction strategy that provides grants to extremely poor households to improve their health, nutrition and education particularly of children aged 0-14. It aims to provide monetary aid to poor beneficiaries with the hope that these investments in human capital would lessen the great financial divide among the haves and the have nots. 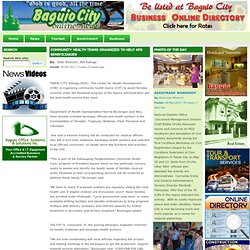 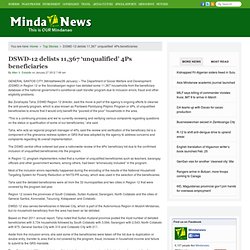 Bai Zorahayda Taha, DSWD Region 12 director, said the move is part of the agency’s ongoing efforts to cleanse the anti-poverty program, which is also known as Pantawid Pamilyang Pilipino Program or 4Ps, of unqualified beneficiaries to ensure that it would only benefit the “poorest of the poor” households in the area. “This is a continuing process and we’re currently reviewing and verifying various complaints regarding questions on the status or qualification of some of our beneficiaries,” she said.

814 families removed from 4Ps. CEBU CITY, Philippines – Due to non-compliance and disqualiﬁcation, the Region 7 ofﬁce of the Department of Social Welfare and Development (DSWD) 7 has removed 814 family beneﬁciaries’ of the Pantawid Pamilyang Pilipino Program last year. 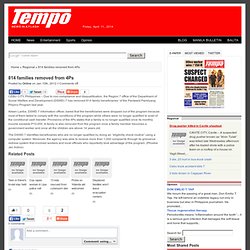 Aileen Lariba, DSWD 7 information ofﬁcer, bared that the beneﬁciaries were dropped out of the program because most of them failed to comply with the conditions of the program while others were no longer qualiﬁed to avail of the conditional cash transfer. Provisions of the 4Ps states that a family is no longer qualiﬁed once its monthly income exceeds P10,000. A family is also removed from the program once a family member becomes a government worker and once all the children are above 14 years old.

The DSWD 7 identiﬁes beneﬁciaries who are no longer qualiﬁed by doing an “eligibility check routine” using a computer system. Comments.