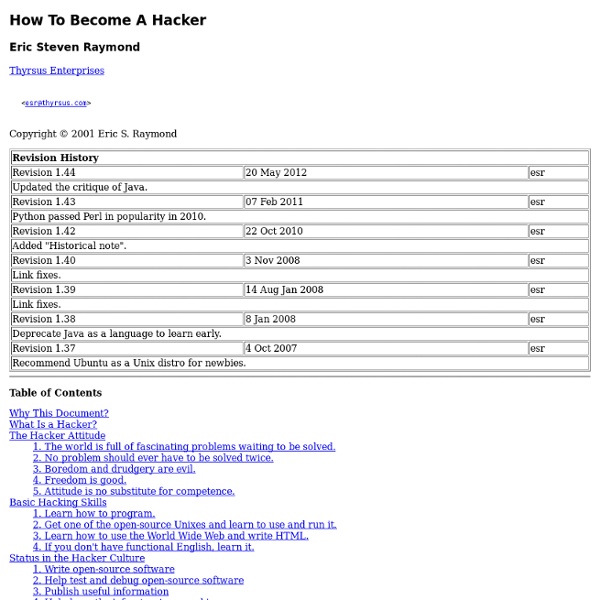 Copyright © 2001 Eric S. Raymond As editor of the Jargon File and author of a few other well-known documents of similar nature, I often get email requests from enthusiastic network newbies asking (in effect) "how can I learn to be a wizardly hacker?". Back in 1996 I noticed that there didn't seem to be any other FAQs or web documents that addressed this vital question, so I started this one. A lot of hackers now consider it definitive, and I suppose that means it is. Still, I don't claim to be the exclusive authority on this topic; if you don't like what you read here, write your own. If you are reading a snapshot of this document offline, the current version lives at Note: there is a list of Frequently Asked Questions at the end of this document. Numerous translations of this document are available: ArabicBelorussianChinese (Simplified), Czech, Danish, Dutch, Estonian, German, GreekItalianHebrew, Norwegian, PersianPortuguese (Brazilian), RomanianSpanish, Turkish, and Swedish. 1. 2. 3.

Hackers: Heroes of the Computer Revolution - Wikipedia, the free The book saw an edition with a new afterword (entitled "Afterword: Ten Years After") by the author in 1994.[1] In 2010, a 25th anniversary edition with updated material was published by O'Reilly.[2] Levy's description of hacker ethics and principles[edit] First and foremost to Levy's principles is the concept of the hacker ethic and the popularization of them to popular culture. In Levy's own words, the principles dictate; Access to computers—and anything which might teach you something about the way the world works—should be unlimited and total.

What is a Hacker Copyright © 2001 Eric S. Raymond As editor of the Jargon File and author of a few other well-known documents of similar nature, I often get email requests from enthusiastic network newbies asking (in effect) "how can I learn to be a wizardly hacker?". Back in 1996 I noticed that there didn't seem to be any other FAQs or web documents that addressed this vital question, so I started this one. A lot of hackers now consider it definitive, and I suppose that means it is. Anonymous Desktop OS Released, Hacking Tools Included The hacking group Anonymous now has its own desktop operating system, pre-loaded with tools for finding Website vulnerabilities and simulating denial-of-service attacks. However, some members of the group are already distancing themselves from the software. Anonymous-OS is based off Ubuntu and uses MATE, an alternative user interface.

The Mozilla Manifesto Introduction The Internet is becoming an increasingly important part of our lives. The Mozilla project is a global community of people who believe that openness, innovation, and opportunity are key to the continued health of the Internet. We have worked together since 1998 to ensure that the Internet is developed in a way that benefits everyone. We are best known for creating the Mozilla Firefox web browser. The Mozilla project uses a community-based approach to create world-class open source software and to develop new types of collaborative activities.

Why the World Need Hackers Now: The Link Between Open Source Development & Cultural Evolution I’ve been brushing up on the work of Eric S. Raymond, an open source software advocate and author of ‘The Cathedral and the Bazaar,’ in preparation for meeting and interviewing him at next week’s Culture Conference in Philly and Boston. Raymond has written extensively about the attitudes and ethos of hackers, the mechanisms of open-source development, and the relationship between motivation and reputation in a gift economy. As I read his stuff, I see a strong parallel between how hacker culture can apply to culture hacking, and functionally accelerate personal and social evolution at scale. So let’s start with the hacker attitude: (excerpted from Raymond’s essay How to Become a Hacker) 1.

Code & Conquer Most Important: Have Fun. And earn some badges. See how your strategy works out in different scenarios, challenge other players, receive points, earn badges and climb your way to the top of the leaderboard. Boost your coding skills. Do it playing. How-To Permanently Delete Your Facebook Account Looking to permanently delete your Facebook account? Not surprising. Over the years, Facebook has seen its share of controversy in regards to the privacy of its users. It’s hard to say what sparked all the excitement: Rapid growth of its service?

the hacker's manifesto, 1998 by Morbus & Stillborn the hacker's manifesto, 1998 by Morbus & Stillborn On Monday, June 22, 1998, the webserver that Disobey.com resided on was hacked. After two days of people coming to the site in hopes of finding the quality content that they have grown accustomed too, they were met with 404's in every direction. It sucked real bad. The Hacker's Ethics The idea of a "hacker ethic" is perhaps best formulated in Steven Levy's 1984 book, Hackers: Heroes of the Computer Revolution. Levy came up with six tenets: Access to computers - and anything which might teach you omething about the way the world works - should be unlimited and total. Always yield to the Hands-On imperative! All information should be free. I2P The software is free and open source and is published under multiple licenses. The name I2P is derived from Invisible Internet Project, which, in pseudo-mathematical notation, is represented as I²P. Technical design[edit]

Black fax The term black fax refers to a prank fax transmission, consisting of one or more pages entirely filled with a uniform black tone. The sender's intention is typically to consume as much of the recipient's fax ink, toner, or thermal paper as possible, thus costing the recipient money and/or denying the recipient the use of their machine (this is similar to computer-based denial of service attacks). This is made easier because the fax transmission protocols compress the solid black image very well, so a very short fax call can produce many pages.