The FBI’s secret biometrics database they don’t want you to see — RT America. The Federal Bureau of Investigation (FBI) wants to prevent information about its creepy biometric database, which contains fingerprint, face, iris, and voice scans of millions of Americans, from getting out to the public. The Department of Justice has come up with a proposal to exempt the biometric database from public disclosure. It states that the Next Generation Identification System (NGI) should not be subject to the Privacy Act, which requires federal agencies to give people access to records that have been collected concerning them, “allowing them to verify and correct them if needed.” The proposal states that allowing individuals to view their own records, or even an account of those records, could compromise criminal investigations or “national security efforts,” potentially reveal a “sensitive investigative technique,” or provide information that could help a subject “avoid detection or apprehension.” 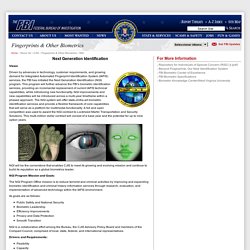 This program will further advance the FBI’s biometric identification services, providing an incremental replacement of current IAFIS technical capabilities, while introducing new functionality. NGI improvements and new capabilities will be introduced across a multi-year timeframe within a phased approach. The NGI system will offer state-of-the-art biometric identification services and provide a flexible framework of core capabilities that will serve as a platform for multimodal functionality. A full and open competition was used to award the NGI contract to Lockheed Martin Transportation and Security Solutions. NGI Program Mission and Goals: Its goals are as follows: 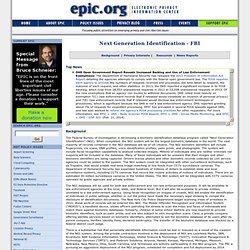 The FOIA requires each agency to provide the numbers of requests received and processed, the time taken to respond, the outcome of each request, and other statistics. In 2013, the DHS reported a significant increase in its FOIA backlog, which rose from 28,553 unanswered requests in 2012 to 53,598 unanswered requests in 2013. Of the nine exemptions that an agency can invoke to withhold documents, DHS relied most heavily on exemption 7(C) (law enforcement records that if released would constitute an invasion of personal privacy) and 7(E) (law enforcement records that if released would disclose law enforcement techniques or procedures, which is significant because the DHS is not a law enforcement agency. Background Pages. FBI's Next Generation Identification Biometrics Database. The FBI's Next Generation Identification: Bigger and Faster but Much Worse for Privacy.

FBI Ramps Up Next Generation ID Roll-Out—Will You End Up in the Database? NextGov.com is reporting that the FBI will begin rolling out its Next Generation Identification (NGI) facial recognition service as early as this January. 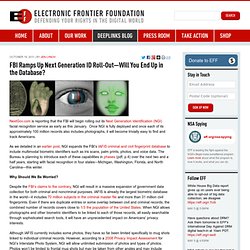 Once NGI is fully deployed and once each of its approximately 100 million records also includes photographs, it will become trivially easy to find and track Americans. As we detailed in an earlier post, NGI expands the FBI’s IAFIS criminal and civil fingerprint database to include multimodal biometric identifiers such as iris scans, palm prints, photos, and voice data. The Bureau is planning to introduce each of these capabilities in phases (pdf, p.4) over the next two and a half years, starting with facial recognition in four states—Michigan, Washington, Florida, and North Carolina—this winter. Why Should We Be Worried? Despite the FBI’s claims to the contrary, NGI will result in a massive expansion of government data collection for both criminal and noncriminal purposes.

The Problem of False Positives in Large Data Sets (p. 3). Urges Congress to Protect Privacy in Face Recognition. Today, EFF Staff Attorney Jennifer Lynch urged Congress to limit the collection of biometrics and protect privacy with respect to the use of face recognition technology. 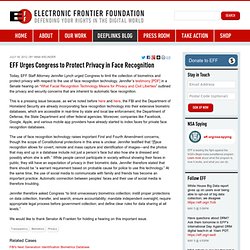 Jennifer’s testimony [PDF] in a Senate hearing on “What Facial Recognition Technology Means for Privacy and Civil Liberties” outlined the privacy and security concerns that are inherent to automatic face recognition. This is a pressing issue because, as we've noted before here and here, the FBI and the Department of Homeland Security are already incorporating face recognition technology into their extensive biometric databases, which are accessible in real-time by state and local law enforcement, the Department of Defense, the State Department and other federal agencies. Moreover, companies like Facebook, Google, Apple, and various mobile app providers have already started to index faces for private face recognition databases. We would like to thank Senator Al Franken for holding a hearing on this important issue. FBI’s Facial Recognition is Coming to a State Near You. FBI Plans to Have 52 Million Photos in its NGI Face Recognition Database by Next Year.

New documents released by the FBI show that the Bureau is well on its way toward its goal of a fully operational face recognition database by this summer. 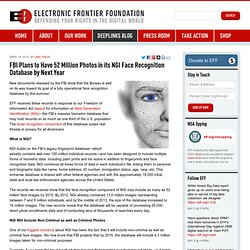 EFF received these records in response to our Freedom of Information Act lawsuit for information on Next Generation Identification (NGI)—the FBI’s massive biometric database that may hold records on as much as one third of the U.S. population. The facial recognition component of this database poses real threats to privacy for all Americans. What is NGI?