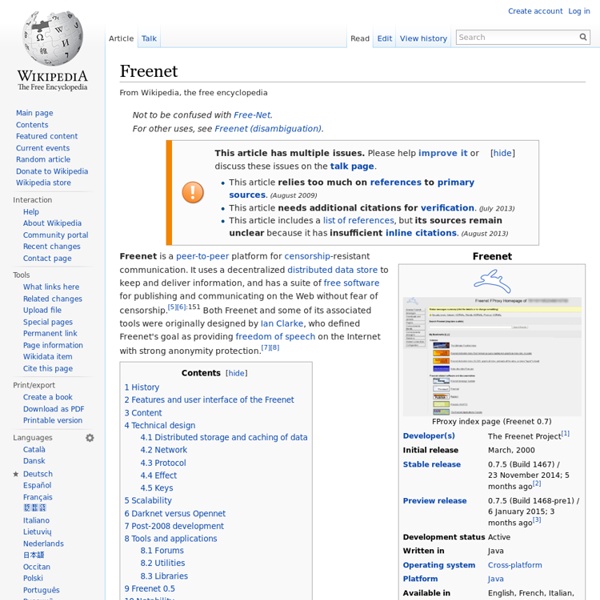 History[edit] The origin of Freenet can be traced to Ian Clarke's student project at the University of Edinburgh, which he completed as a graduation requirement in the Summer of 1999.[9][10][11] Ian Clarke's resulting unpublished report "A distributed decentralized information storage and retrieval system" (1999) provided foundation for the seminal paper written in collaboration with other researchers, "Freenet: A Distributed Anonymous Information Storage and Retrieval System" (2001).[12][13] According to CiteSeer, it became one of the most frequently cited computer science articles in 2002.[14] The distributed data store of Freenet is used by many third-party programs and plugins to provide microblogging and media sharing,[16] anonymous, decentralised version tracking,[17] blogging,[18] a generic web of trust for decentralized spam resistance,[19] Shoeshop for using Freenet over Sneakernet,[20] and many more. Features and user interface of the Freenet[edit] Content[edit] Network[edit] Frost

The Freenet Project - /index Usenet A diagram of Usenet servers and clients. The blue, green, and red dots on the servers represent the groups they carry. Arrows between servers indicate newsgroup group exchanges (feeds). Arrows between clients and servers indicate that a user is subscribed to a certain group and reads or submits articles. One notable difference between a BBS or web forum and Usenet is the absence of a central server and dedicated administrator. Introduction[edit] The articles that users post to Usenet are organized into topical categories called newsgroups, which are themselves logically organized into hierarchies of subjects. In most newsgroups, the majority of the articles are responses to some other article. When a user posts an article, it is initially only available on that user's news server. The format and transmission of Usenet articles is similar to that of Internet e-mail messages. Today, Usenet has diminished in importance with respect to Internet forums, blogs and mailing lists. History[edit]

The Freenet Project - /faq Additional information sources General / Philosophical questions Technical questions Publisher questions Contribution questions Security questions Philosophical answers What is Freenet? How is Freenet different to Tor? Freenet is a self-contained network, while Tor allows accessing the web anonymously, as well as using "hidden services" (anonymous web servers). Freenet is a distributed datastore, so once content is uploaded to Freenet, it will remain on Freenet forever, as long as it remains popular, without fear of censorship or denial of service attacks, and without needing to run your own web server and keep it online constantly. The other big difference is that Freenet has the "darknet" or Friend to Friend mode, where your Freenet node (software on your computer) only connects to the Freenet nodes run by your friends, i.e. people you know (and maybe to their friends, to speed things up). Freenet has many unsolved problems, and is still experimental. Summary: Tor (or I2P): Freenet in general:

The dark side of the internet | Technology Fourteen years ago, a pasty Irish teenager with a flair for inventions arrived at Edinburgh University to study artificial intelligence and computer science. For his thesis project, Ian Clarke created "a Distributed, Decentralised Information Storage and Retrieval System", or, as a less precise person might put it, a revolutionary new way for people to use the internet without detection. By downloading Clarke's software, which he intended to distribute for free, anyone could chat online, or read or set up a website, or share files, with almost complete anonymity. "It seemed so obvious that that was what the net was supposed to be about – freedom to communicate," Clarke says now. His tutors were not bowled over. Undaunted, in 2000 Clarke publicly released his software, now more appealingly called Freenet. Installing the software takes barely a couple of minutes and requires minimal computer skills. Unfathomable and mysterious But sheer scale is not the only problem. Open or closed?

Hyperlink QR-Code Tag Extension Freenet Wiki HTML5 and the ArcGIS Platform - Thinking about HTML5? With the steady growth in smart mobile devices and with increasing support of the HTML5 standard by modern web browsers, interest in HTML5 is clearly on the rise. Webinar Recording Recorded: July 4, 2013 (32 minutes) HTML5-based web and mobile mapping technology has evolved to a point that organizations are leveraging the HTML5 standard and associated technology to provide ready access to spatial data like never before. As well as delivering straightforward, easy-to-use public access to maps via smartphones, tablets, and desktop web browsers without plug-ins, web mapping development platforms like Geocortex are now being deployed in parallel with Esri's ArcGIS platform to help organizations collect and edit data in the field—including in remote and offline environments. Using examples and principles associated with the spatial application infrastructure developed by Latitude Geographics, this webinar will explore how organizations are starting to leverage new development possibilities introduced by the ongoing evolution of web standards.

11 Fantastic Browser Tools for Making and Reading QR Codes Are people still using QR codes? They sure are and not just for company advertisements and business cards. Providing a convenient way to share websites with friends or send links to our own mobile devices, QR codes are handy tools. QR code makers are available for most browsers and for some, there are readers as well. For Firefox For quick code creation, QR Code for Firefox generates codes from either selected text or the URL of the page you are visiting. Another handy and fast extension is QrCodeR. When you want to read a QR code displayed on a website you are visiting, the QR Secret Decoder Ring extension for Firefox works well. For Chrome The QR Code Extension generates your code from the URL of the tab you are currently on along with good options for editing. For a fast, one-click way to create a code from a URL, Quick QR is a great Chrome extension. QuickMark QR Code Extension is a terrific tool that both generates and decodes. For Safari For Opera For Opera, QR Box works perfectly.