Adolf Hitler, Sri Aurobindo and the Mother. Mother's Agenda, Vol. 6January 12, 1965 (Regarding an old “Playground Talk” of March 8, 1951, in which Mother spoke of the being that possessed and “guided” Hitler: “Hitler was in contact with a being whom he considered to be the Supreme: that being would come and give him advice and tell him all that he had to do. 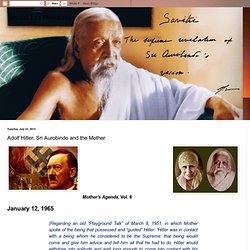 Hitler would withdraw into solitude and wait long enough to come into contact with his ‘guide’ and receive inspirations from him which he would afterwards carry out very faithfully. That being whom Hitler took for the Supreme was quite simply an Asura, the one called in occultism ‘the Lord of Falsehood,’ and he proclaimed himself to be ‘the Lord of Nations.’ He had a resplendent appearance and could pull the wool over anyone's eyes, except one who truly had occult knowledge and could thus see what was there, behind the appearance. Then, as I told you, the next day, the news of the attack came, and that was really the end of Hitler. As for Sri Aurobindo... Gupta Empire. The high points of this cultural creativity are magnificent architecture, sculptures and paintings.[7] The Gupta period produced scholars such as Kalidasa, Aryabhata, Varahamihira, Vishnu Sharma and Vatsyayana who made great advancements in many academic fields.[8][9] Science and political administration reached new heights during the Gupta era.[10] Strong trade ties also made the region an important cultural center and set the region up as a base that would influence nearby kingdoms and regions in Burma, Sri Lanka, and Southeast Asia.[11] The earliest available Indian epics are also thought to have been written around this period. 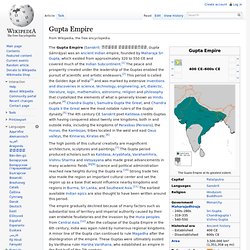 The empire gradually declined because of many factors such as substantial loss of territory and imperial authority caused by their own erstwhile feudatories and the invasion by the Huna peoples from Central Asia.[12] After the collapse of the Gupta Empire in the 6th century, India was again ruled by numerous regional kingdoms. 120 Million Year Old Map Found - Proof Of Ancient Civilization.

History of India - Myth of Aryan Invasion - Facets of India : Ancient and Modern, Aryan Invasion Theory. Dear guest, your feedback is very important to us and is more than welcome. Please email (sarvesh.aryavert@gmail.com) . If you are not viewing this page from its parent site, please click here to visit the parent site titled "Facets of India : Ancient and Modern".

Obligatory Note: This matter is created/compiled by Sarvesh Aryavert from various authentic resources for the site titled "Facets of India : Ancient and Modern". Please feel free to link the page as it is, including this note, but strictly refrain from copying it as it may result in appropiate legal action.

Thanks for being my guest. India that is Bharat was ruled by Britishers right from the Re-naissance period of the Europe till 1947. They shamelessly (also amusingly) tried to prove that Indians were not aboriginal. These authors gave an Indian name "Aryan" to these plunderers to insult Indians. Max Muler, the self/west-proclaimed Sanskritist was nothing but a German racist, who brought up this ficational Aryan race. Olduvai Gorge: Oldest Evidence of Mankind's Evolution. Olduvai Gorge is a site in Tanzania that holds the earliest evidence of the existence of human ancestors. 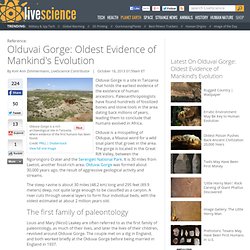 Paleoanthropologists have found hundreds of fossilized bones and stone tools in the area dating back millions of years, leading them to conclude that humans evolved in Africa. Olduvai is a misspelling of Oldupai, a Maasai word for a wild sisal plant that grows in the area. The gorge is located in the Great Rift Valley, between the Ngorongoro Crater and the Serengeti National Park. It is 30 miles from Laetoli, another fossil-rich area. Olduvai Gorge was formed about 30,000 years ago, the result of aggressive geological activity and streams. The steep ravine is about 30 miles (48.2 km) long and 295 feet (89.9 meters) deep, not quite large enough to be classified as a canyon. The first family of paleontology Louis was born in 1903 in Kenya, where his English parents were missionaries. In 1930s, the Leakeys found stone tools in Olduvai and elsewhere. Twiggy.