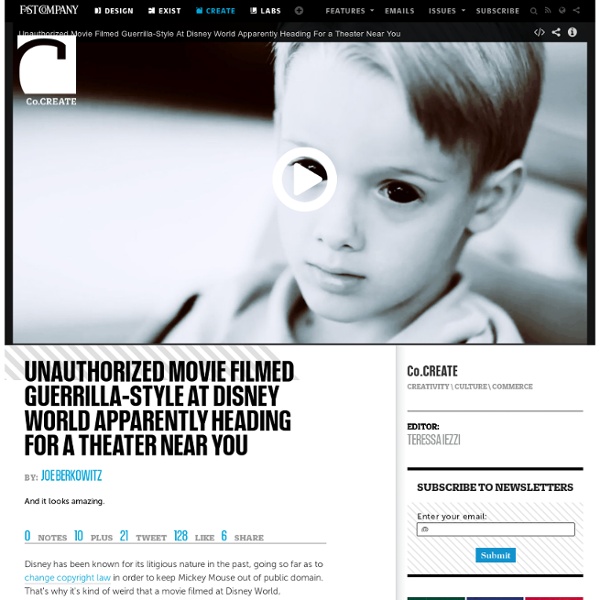 Disney has been known for its litigious nature in the past, going so far as to change copyright law in order to keep Mickey Mouse out of public domain. That's why it's kind of weird that a movie filmed at Disney World, unapproved by the Mouse House, even exists at all. After making a splash at Sundance this year, though, the intriguing Escape From Tomorrow appears to be heading for a theatrical release--and the first trailer is now online. First-time director Randy Moore shot the film at the Florida theme park, guerrilla-style, over a series of visits with his crew and an unknown cast. Details of the terms Moore worked out with Disney remain under wraps for now, but the controversial matter seems to be settled. While the circumstances surrounding Escape's production have dominated the conversation thus far, with the release of this trailer, perhaps talk will shift to the movie itself.

The End Of Advertising As We Know It "How are we supposed to judge a creative idea versus a product idea?" This was a question that surfaced during one of the many long judging sessions last week in the South of France where I got to preside over the Mobile category, one of the 16 categories at the Cannes Lions International Festival of Creativity. It caused quite a stir in the jury room. Some strongly argued that creative ideas and product ideas should not be in the same category, while others countered that real users don’t necessarily differentiate the two. Whether it’s a campaign or a product, brands are vying for people’s time.

HOW DOES NONVIOLENT COMMUNICATION WORK? NVC offers many tools for connecting with others in ways that serve life. Nonviolent Communication can dramatically improve our relationships by helping us focus our attention on: Empathic understanding of others – without compromising our values, and Honest expression of our feelings and needs – without blame or judgment

6 hostage negotiation techniques that will get you what you want How does hostage negotiation get people to change their minds? The Behavioral Change Stairway Model was developed by the FBI’s hostage negotiation unit, and it shows the 5 steps to getting someone else to see your point of view and change what they’re doing. It’s not something that only works with barricaded criminals wielding assault rifles — it applies to most any form of disagreement. There are five steps: Active Listening: Listen to their side and make them aware you’re listening.Empathy: You get an understanding of where they’re coming from and how they feel.Rapport: Empathy is what you feel.

Can Don Draper Pivot? Lessons From Second-Chance CEOs Howard Schultz, Steve Jobs, And Mickey Drexler We’ve watched him show up intoxicated (from liquor or sex, or both), yet seamlessly spin a captivating pitch for anything from cigarettes and baked beans to a slide carousel and a Chevy. But as Mad Men’s sixth season drew to a close, Don Draper’s pitching prowess took a sharp detour into a dark night of the soul--at the conference table with potential new client Hershey’s. Raw and emotional, he revealed his roots and sucked all the air out of that conference room. It was a tipping point for the partners of SC & P, who’d had enough of his lateness, daytime disappearances, cutting remarks, and general imperiousness. Praise versus Encouragement Most of us believe that we need to praise our children more. However, there is some controversy regarding this point. If we always reward a child with praise after a task is completed, then the child comes to expect it.

A scientific guide to saying "no": How to avoid temptation and distraction 2K Flares Filament.io 2K Flares × Learning how to say no is one of the most useful skills you can develop I found, especially when it comes to living a more productive and healthy life. Saying no to unnecessary commitments can give you the time you need to recover and rejuvenate. Saying no to daily distractions can give you the space you need to focus on what is important to you. And saying no to temptation can help you stay on track and achieve your health goals.

FBI Secrets of Establishing Rapport: Interview with FBI Veteran Robin Dreeke Even if you’re the biggest introvert in the world, Robin Dreeke can get you to talk. As a 15-year FBI veteran and lead trainer for social engineering and interpersonal skills at the agency, Dreeke is a master of establishing rapport with just about anyone, and that includes the IT guy who never looks up from his keyboard. As head of the Behavioral Analysis Program, Dreeke often is asked by companies to help their leaders better communicate with their teams and increase collaboration .

Zaha Hadid's sport stadiums: 'Too big, too expensive, too much like a vagina' One looks like a futuristic bicycle helmet, stretched across its Tokyo site in an aerodynamic sweep. The other has been said to resemble a vagina, rising out of the Qatari desert in a great vulvic bulge. Both are in fact sinuous sporting stadiums by the London-based Iraqi architect Zaha Hadid, who is facing calls for her exuberant designs to be scaled back. This week Japanese sports officials finally bowed to growing criticism that Hadid's scheme for the Tokyo 2020 Olympic stadium was too big and too expensive, saying they would shrink the design by a quarter. The 80,000-seat venue, planned for the site of the current 48,000-seat national stadium, built in 1958, is described by Hadid as "light and cohesive", its structure forming a dynamic bridge that "creates an exciting new journey for visitors".

Max-Neef Model of Human-Scale Development Kath Fisher: "Manfred Max-Neef is a Chilean economist who has worked for many years with the problem of development in the Third World, articulating the inappropriateness of conventional models of development, that have lead to increasing poverty, massive debt and ecological disaster for many Third World communities. He works for the Centre for Development Alternatives in Chile, an organisation dedicated to the reorientation of development which stimulates local needs.