Save Our Inboxes! Adopt the Email Charter! 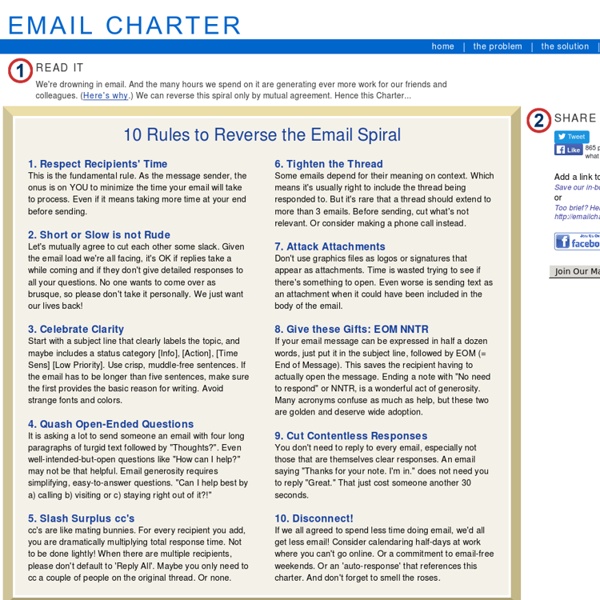 5 New Truths about Internal Comms Email | Rockstar Comms - Internal Communication Tips & Tactics for Easygoing Internal Comms Watch your back, Outlook! Everybody’s grabbing headlines by calling time on email. First, French firm Atos banned internal email. Then, Volkswagen joined in by switching off after-hours Blackberry service. So is email dead? What’s happening is far more interesting. Here’s 5 email realities you need to know to succeed at internal comms. #1 – We’re all addicted to email People love email. We’re getting more email than ever. Email is definitely an easy target for a quick moan, but it’s still the first thing employees do every morning. Your Outlook inbox is where friends, family, colleagues and bosses jostle for our attention. Staff are getting more email, but they aren’t necessarily spending more time dealing with it. The result? Which leads us into…. #2 — People are getting better at ignoring you True, the inbox is getting busier. Instead, people are paying attention to fewer and fewer messages. Have you noticed, over the last 12 months, how there’s been a subtle shift in email etiquette?

Stop Email Overload - Amy Gallo - Best Practices Complaints about email abound. Perhaps you’ve heard some of these or uttered them in pain yourself: I receive hundreds of emails a day. I can spend my whole day responding to incoming messages. I can’t find anything in my inbox. In response, some companies are taking drastic steps to help workers manage the number of messages they receive. The CEO of Atos, a French IT services company, has vowed to ban internal email by 2013. What the Experts Say Productivity experts counsel against such extreme measures. Recognize it’s not really about email According to Allen, email overload is only a symptom of a larger issue: a lack of clear and effective protocols. Allen had one client who had an average backlog of 3,000 – 4,000 emails. Control your flow Another way to reduce the time you spend on email is to turn off the spigot of incoming messages. Pozen says you can also reduce how many you receive by sending fewer and limiting whom you send to. Delete. Principles to Remember: Do: Don’t:

Inside Motley Fool's Enterprise Social Network - The BrainYard The Motley Fool established an enterprise social network to combat portal, wiki, and email overload--and it's working. Enterprise social networking turned out to be a foolish choice for the Motley Fool, which is to say it turned out to be a good thing. Founded in 1993, the Motley Fool operates today as a financial news, analysis, and discussion website for investors, including premium services for subscribers. Based in Alexandria, Va., the Fool employs about 250 people, including a few in London and Australia. The financial website publisher turned to Socialtext last spring, after an initial flirtation with Yammer. The intranet site Motley Fool created with Socialtext is branded Jingle, after the jingle bells on a jester's hat. [ Social enterprise networks can be challenging to implement. "That was a complete nightmare--when you were looking for something, was it in the wiki, or was it in SharePoint?" There are trade-offs to everything, however.

Html Comment Box - HTML Comment Box / Guestbook Scheduling Email with Boomerang Sometimes, we’d really like to be able to write an email message at one time and send it at another. There are all sorts of reasons why this might be so. As Jason wrote recently in his post about worst email practices, responding too soon might seem rude. At other times, as Nels’ colleague indicated, sometimes too quick a response (or a response at an odd hour of the day or night!) suggests a greater availability than we’d like to communicate. Yet, barring a way to deal with the email right away and send it later, it’s all too easy to forget about the email, losing it somewhere deep in the inbox. Happily, there is a way to write an email and have it sent later—automatically. There are two principal things that Boomerang does: it lets you schedule a time for a particular email to return to your inbox, and it lets you schedule a time for a message to be sent out. Scheduling an Email for Return We’ve all had it happen. Scheduling an Email to be Sent Later Handy, indeed. Return to Top

Atos boss Thierry Breton defends his internal email ban 6 December 2011Last updated at 14:52 ET Mr Breton says he has no plans to force the internal email ban onto his firm's clients Thierry Breton caused a sensation last week when he told an interviewer that he planned to ban internal email at the information technology services giant, Atos. In fact the chief executive was only repeating a strategy he had already outlined earlier in the year. Nevertheless, his comments sparked a series of editorials across the mainstream media and the blogosphere. The idea was described as both "bold" and "stupid", with some writers betting that the proposal would be ditched before the self-imposed 2014 zero-email deadline. But Mr Breton is determined to add the move to his already impressive CV. He is the former chief executive and chairman of France Telecom, served as France's minister of economy, finance and industry for two years and lectured at Harvard Business School before joining Atos three years ago. Implementing the policy will be no small feat.

Tools 4 noobs - tools you didn't even know you needed Shrinking Your Email Signature A few weeks ago, I came across an early morning tweet from Kathleen linking to a post on the New York Times’ Gadgetwise blog that asks the world to “Stop the Signature-File Insanity.” In this post, Sam Grobart provided an example of a recent signature from an email he had received that was fifteen lines long and that included everything from title, address, email address, fax number, and an advertisement for an upcoming conference. As he rightly points out, some of this information is redundant: if someone is communicating with you by email, you probably don’t need to be reminded of what his email address is. Grobart goes line by line through the signature to assess what information is necessary and what can be left out. Email is a necessary method of scholarly communication and something that ProfHacker has discussed on multiple occasions (see Natalie’s “From the Archives” post earlier this week that collected what we’ve said about email). Brian Croxall, Ph.D. Return to Top

'No Email Friday' pays off for Florida-based bank According to Gene Evans, Senior Vice President at USAmeriBank in Clearwater, having a day without email has improved internal communication and has allowed the bank to become more efficient. By now, we've all heard about Atos doing away with internal email. Evans says he implemented his own 'No Email' policy 6 months ago within his bank's retail division. The reason? "I think that as technology has improved we've gotten lazy about communicating verbally," he says. Instead of composing long-winded emails, Evans' employees now pick up the phone and solve problems much faster. For more on the story, go to: