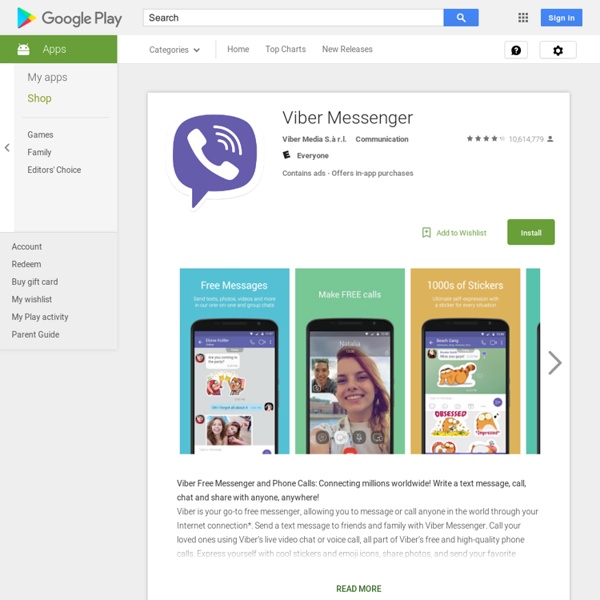 KakaoTalk: Free Calls & Text KakaoTalk is a fast & multifaceted messaging app. Send messages, photos, videos, voice notes and your location for free. Make chatting extra fun with an array of emoticons and sticker collections. More about KakaoTalk: ★ Chosen by more than 150 million users worldwide ★ Fast, fun, easy way to communicate with friends and family ★ Uses Internet connection (3G/EDGE or Wi-Fi) for calls and messaging ★ Supports: Android, iOS, BlackBerry, Windows OS, Asha The Stupid Things You Do With Your Smartphone (and How to Fix Them) As a new smartphone owner (I refuse to call my old Garmin a smart phone, it kinda maybe let me surf the web, no downloadable apps, and I couldn't even get java jars to work worth a damn on it...), I find that this is becoming my #1 pet peeve. I don't really give a damn about new email, 95% of the time, I'm reading it from my computer, not my phone. And only when I want to read it, not as soon as somebody sends me something. Same with FB and Twitter.

ChatSecure Download on Google Play or Direct Download. Get the iPhone and iPad version at ChatSecure.org What is ChatSecure? Unlike other apps that keep you stuck in their walled garden, ChatSecure is fully interoperable with other clients that support OTR and XMPP, such as Adium,Jitsi, and more. Strong Cryptography fring Free messages, Free Calls. Unlimited! Now, call and send messages as much as you want!Nimbuzz Messenger combines the power of internet and smart phone messenger into one, and lets you make cheap international voice calls, send unlimited chat messages, share files on any mobile device across popular messengers. Nimbuzz Messenger is available on Android, iOS, Windows Phone, Blackberry, Symbian, Java, Windows and Mac. Nimbuzz Messenger lets you chat with your buddies on Nimbuzz, Facebook, Gtalk 24x7 for free.

Talkatone free calls + texting Free Texting (real SMS messages) to any Phone number in the United States, Canada and 40 countries.Free HD Voice and Video Calls between Android and other platformsTurn your Android Tablet into a Phone!TextMe is a cross-platform messaging application that allows you to send text messages (real sms) to any phone number in United States, Canada, Mexico and 100 countries in the World for FREE. Also, if your friends install the app as well, you will be able to do a lot more with them, including FREE CALLS and FREE VIDEO CALLS between Android and other platforms. So Sign up, share TextMe with your friends and start a call or a video chat for free.

Dessicate Your Gadgets With the Bheestie Bag We don’t live in a vacuum. Neither do our gadgets. From steamy bathrooms to grubby, sweaty hands, little bits of moisture tend to creep into our electronics. Enter the Bheestie, an airtight plastic pouch that sucks — in a good way. It holds two smaller, porous bags that contain several peppercorn-sized pellets. Spark IM Client The Ignite Realtime community has just released Spark 2.8.0 and it can be downloaded from Ignite Realtime: Downloads. This is a major release marking the end of support for Java 7 (which has reached the end of life state more than a year ago). Full Spark installers have already been bundled with Java 8 for some time. Online installer won't work with Java 7 starting with 2.8.0 version. We recommend updating to Java 8. Underlying Smack library has been updated to the latest version in this release.

Strava Running and Cycling GPS - Android Apps on Google Play “The World’s Top 10 Most Innovative Companies in Fitness” -Fast CompanyTrack your runs and rides with GPS, join Challenges and see how your running and riding compares with friends. TRACK YOUR RUNS AND RIDES WITH GPS• Follow routes you’ve created or found and view your activity map as you record• Get key stats like distance, pace, speed, elevation gained and calories burned• Collect heart rate data from Bluetooth Low Energy sensors CLIMB THE LEADERBOARDS• Set personal records and see how you stack up against friends, locals and pros• Join monthly Challenges designed to push you further FOLLOW FRIENDS• Find your friends and motivate them with kudos and and comments• Share your activities on Facebook and Twitter• Share Instagram photos from your activities on your Strava profile FIND PLACES TO RUN AND RIDE• Explore the most popular segments anywhere you go Strava includes support for Android wear.

Unleash the Power of Android with These Automated Apps And sometimes it re-detects your location once every 5 minutes without you moving. I tested this before by making my phone text me when I "arrived home." I was seeing if it would be worthwhile to move forward on. DryBox The DryBox Rescue system utilizes a patent-pending drying chamber as part of a process that rapidly removes moisture at the molecular level from small electronic devices including cell phones, mp3 players, cameras, GPS units, etc. ***PLEASE NOTE*** We strongly discourage the use of rice, as the moisture can draw starch into the inside of the phone and create new problems. If you are in need of DryBox Rescue services, please do not place the phone in a bag of rice first, and do not attempt to power on the device or plug it into the charger.

Tor Messenger Overview ¶ Tor Messenger is a cross-platform chat program that aims to be secure by default and sends all of its traffic over Tor. It supports a wide variety of transport networks, including XMPP, IRC, Twitter, and others; enables ​Off-the-Record (OTR) Messaging automatically; and has an easy-to-use graphical user interface localized into multiple languages.

Find iPhone, Android, xFi Lite xFi LocatorThis app will locate and perform real-time location tracking of iOS devices as well as Android devices.-To locate an iOS device, use iCloud credential that was used to activate the target device.-To locate an Android device, install this app,xFi Endpoint, on the target device. This app runs natively on Android platform. It locates and shows location of the device you are looking for on Google Map. Super Call Faker (Free) View, create, edit, print and share Microsoft Office documents on your phone or tablet. Smart Office makes creating, editing, printing and sharing Microsoft Office and other documents on the move even easier through a contextual interface, drag and drop editing and sharing to email in original or PDF format and sharing to Dropbox or Google Docs. PRINTING included! No need to buy a separate Printer app. You can print to thousands of wireless printers from 34 manufacturers including HP, Epson, Canon and Samsung. NEW USER INTERFACE!