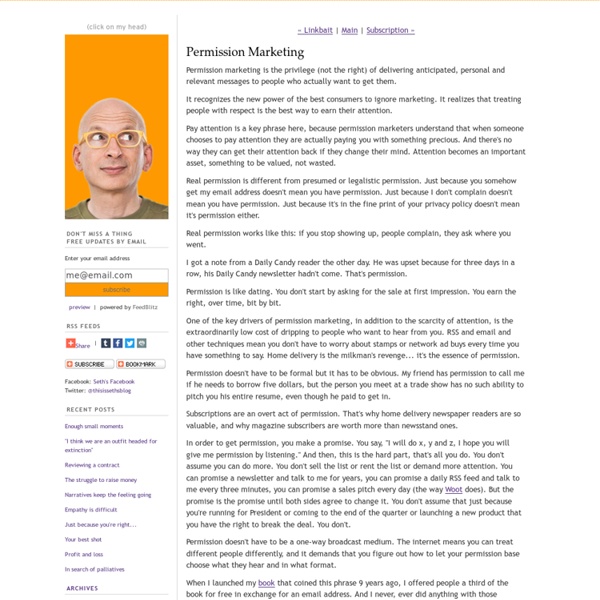 Permission marketing is the privilege (not the right) of delivering anticipated, personal and relevant messages to people who actually want to get them. It recognizes the new power of the best consumers to ignore marketing. It realizes that treating people with respect is the best way to earn their attention. Pay attention is a key phrase here, because permission marketers understand that when someone chooses to pay attention they are actually paying you with something precious. And there's no way they can get their attention back if they change their mind. Attention becomes an important asset, something to be valued, not wasted. Real permission is different from presumed or legalistic permission. Real permission works like this: if you stop showing up, people complain, they ask where you went. I got a note from a Daily Candy reader the other day. Permission is like dating. Permission doesn't have to be formal but it has to be obvious. Subscriptions are an overt act of permission.

Join the UH Community - University of Houston MenuLogin to AccessUH e-Communication Interest Categories Lets keep in touch! The role of sharing: advertising in the age of social media Savvy brands are embracing the power of the share button to support their advertising campaigns. Photograph: Shutterstock During a commercial break amid the annual Macy's fourth of July celebration on NBC, two commercials aired within minutes of one another that underscored a new era of advertising. The first was an ad for Macy's itself, a compilation of real user-submitted footage taken by Macy's shoppers and fans throughout the US. The American Icons crowdsourcing effort has paid big dividends. Then, just a minute later, I found myself watching a different variation of the same formula: Canon produced a collection of slow-motion clips of kids spinning and jumping while competing at a fierce soccer match.

Seth&#039;s Blog: Tribe Management Brand management is so 1999. Brand management was top down, internally focused, political and money based. It involved an MBA managing the brand, the ads, the shelf space, etc. E-communications - University of Houston In order for email to remain an effective means of communication, the university must be strategic in its use of broadcast email messages. Using email impersonally or indiscriminately will harm the credibility of the entire university and make alumni, students, donors, faculty, staff, parents and friends of UH less likely to welcome email that would be of interest to them. Broadcast email is any message or group of messages intended for an audience greater than 100 people.

Social Media Marketing Growth and Strategy The world's greatest social media marketer has objectives and strategies. They're documented—on a spreadsheet—or on some social platform where her peers can collaborate. She understands the whole analytics and metrics thing that matters to the bean counters. "Our biggest problem is awareness" If that's your mantra, you're working to solve the wrong problem. If your startup, your non-profit or your event is suffering because of a lack of awareness, the solution isn't to figure out some way to get more hype, more publicity or more traffic. Those are funnel solutions, designed to fix an ailing process by dumping more attention at the top, hoping more conversion comes out the bottom.

My 5 best career lessons for aspiring digital marketing professionals I’ve been in the digital marketing space for nearly 8 years now, 7 of those within the online gambling (igaming) industry with brand such as Expekt.com and later the Betclic Everest group of brands. Whilst there’s a lot of great career advices out there from very smart people, I’ve often found it hard to identify myself with those people typically writing such career advice posts. They either tend to be HR people themselves or some kind of career coaches. These 5 career advices are such I’ve picked up along the way. Intro to communities of practice The term “community of practice” is of relatively recent coinage, even though the phenomenon it refers to is age-old. The concept has turned out to provide a useful perspective on knowing and learning. A growing number of people and organizations in various sectors are now focusing on communities of practice as a key to improving their performance.This brief and general introduction examines what communities of practice are and why researchers and practitioners in so many different contexts find them useful as an approach to knowing and learning. What are communities of practice?

What is Inbound Marketing? The proven methodology for the digital age Since 2006, inbound marketing has been the most effective marketing method for doing business online. Instead of the old outbound marketing methods of buying ads, buying email lists, and praying for leads, inbound marketing focuses on creating quality content that pulls people toward your company and product, where they naturally want to be. Disengaged Employees? Do Something About It - Susan David by Susan David | 2:00 PM July 15, 2013 New data on employee engagement is in, and it’s downright discouraging. As this post by HBR’s Gretchen Gavett noted, Gallup’s research shows that engagement among US workers is holding steady at a scant 30%.

Digital Tribes - Creating Behaviour Change in Users - The UX Review Everyone is a customer for something. As UX designers we should be aiming to influence customer behaviour in order to persuade them to take action for the benefit of the brands we work for. One way we can do this is by tapping into the theory of digital tribes and the group behaviour they inevitably create. We are all part of a tribe of some sort, whether that be around an interest, a hobby or an organisation. Looking at customer behaviour through this lens can help increase our understanding of the customer journey and more importantly, influence it. The problem with influencing group behaviour Employee engagement According to legend, an engaged janitorial employee at NASA, when asked what he was doing, is said to have replied "I'm helping to put a man on the Moon". Employee engagement is an emergent property of the relationship between an organization and its employees. An "engaged employee" is one who is fully absorbed by and enthusiastic about their work and so takes positive action to further the organization's reputation and interests. An organization with 'high' employee engagement might therefore be expected to outperform those with 'low' employee engagement, all else being equal.[1] Definitions[edit]

The new consumer decision journey The flare-up around advertising blockers on mobile devices is just the latest salvo in the digital-technology “arms race” that has made today’s consumer a formidable force. From social media to mobile devices, technologies have given consumers unprecedented power to compare prices, complain loudly, and find the best deals. This tipping of the balance of power in favor of consumers has been evident for years. In 2009, we declared that the traditional “funnel” model—in which consumers began with a set number of brands in mind and whittled them down until they decided what to buy—had been usurped by what we called “the consumer decision journey.” This journey involved shoppers taking advantage of technology to evaluate products and services more actively, adding and removing choices over time.